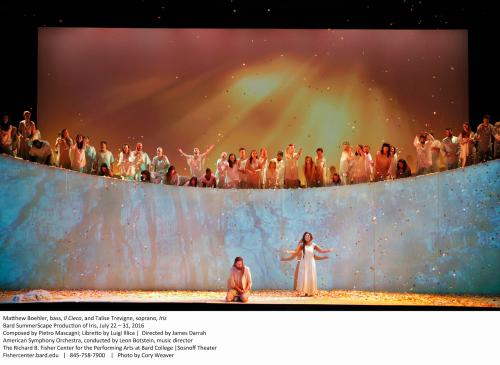 Both works share a librettist, take place in Japan, a location of exotic fascination in the late 19th century, and center on an innocentyoung woman who meets her end due to the careless egotism of male seducers. Iris preceded Butterfly and was initially received better. Mascagni’s sumptuous, lyricalscore influenced Puccini; he even borrowed the idea of a humming chorus. Mascagni’s music remains fresh and enchanting featuring innovations such as a teacup balanced on a violin to produce an eerie tinkling sound. But Puccini’s later work featured more diva-centric arias and melodramatic moments, becoming a beloved choice of stars and audiences. Iris is more integrated and lacking in show-stoppers, plus Mascagni’s enthusiastic support of Mussolini alienated European and American opera bigwigs after World War II and this lovely gem was confined to a back shelf.

Fortunately, director James Darrah and conductor-music director Leon Botstein have rescued the damsel from her dusty closet. Eschewing kimonos, elaborate wigs, and kabuki movement, set designers Emily Anne MacDonald and Cameron Jay Mock and costume designer Peabody Southwell have placed the story in a surreal, dream-like world where Iris is abducted from the simple home of her blind father by the pimp Kyoto and the rich young man Osaka who is enraptured by her innocent beauty. She is taken to Yoshiwara, the red-light district of Tokyo—the sets and costumes here resemble the futuristic milieu of Fritz Lang’s sci-fi silent classic Metropolis. After rejecting Osaka’s advances, Iris jumps into the sewer and perishes as she moves towards a beam of sunlight glistening in the darkness.

Darrah creates numerous stunning stage pictures, supplemented by Neil Peter Jameolis’s lighting. These include the stunning opening scenes in the heroine’s garden featuring a stage awash in brilliant color and falling petals; Iris’s long, Alice-in-Wonderland descent into the sewer; and her final ascent on a mountain of trash towards the redeeming light. Let’s hope that the long-neglected Iris rejoins the repertoire of major opera houses for it has glorious music and many vocal opportunities. 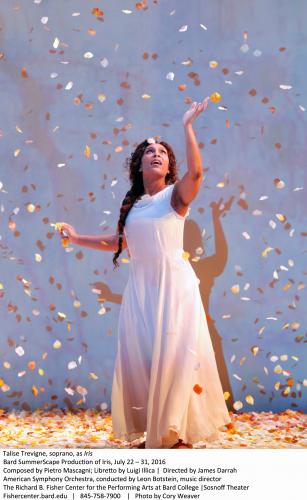