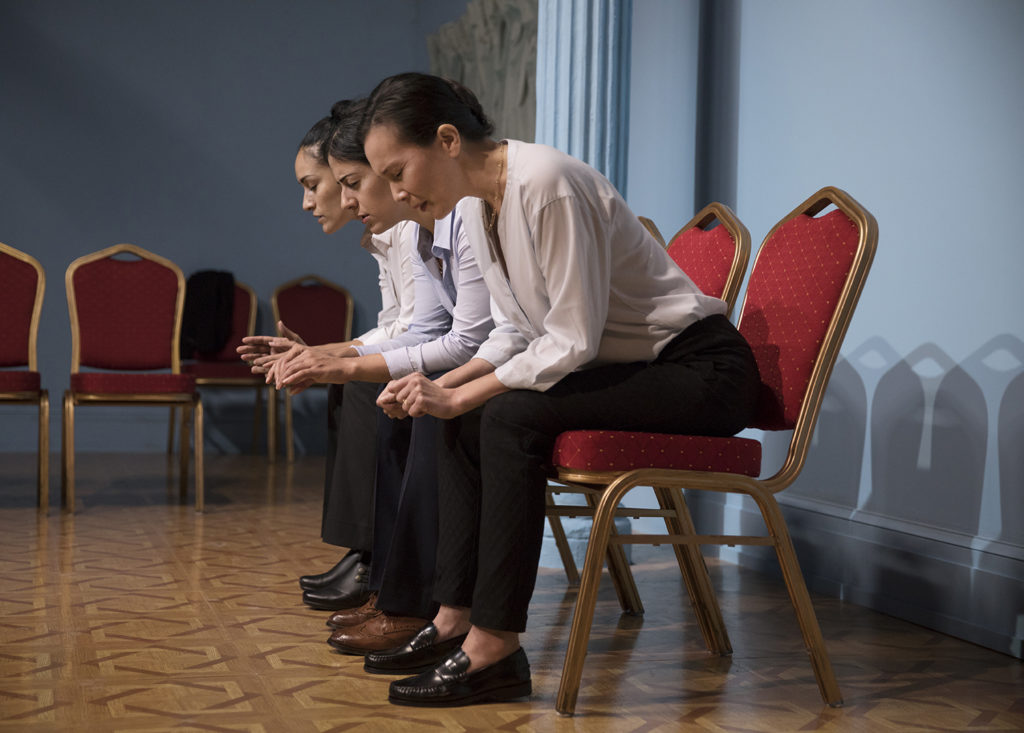 If they come late, do no preliminary research, fail to examine the documentary material arranged in the hallway outside the performance venue, or have no time to read the program notes before the play begins they’ll only gradually discover that the play is a choral rumination on two principal things. One is the story of the long-running Russia-Chechnya conflict, specifically of events of the years 1994 through 2006.

The second, and most important, is the work of Russian journalist Anna Politkovskaya, who was murdered at age 48 in her apartment building, in 2006, presumably for her rigorously factual reporting of combat, terrorism, and suffering during the Russia-Chechnya war.

Massini, artistic director of Milan’s Piccolo Teatro (once the domain of the late genius director Giorgio Strehler), is a rising international force in the writing and staging of politically themed drama. Notably, he’s the author of the much ballyhooed The Lehman Trilogy, whose production is coming from London’s National Theatre to the Park Avenue Armory in the near future. Much credit goes to the Play Company and its artistic director, Kate Loewald, for their noteworthy efforts in bringing such international work to the increasingly parochial New York theatre.

In Intractable Woman Massini presents Politkovskaya’s work as representative of the journalistic ideal of reporting the facts without taking sides, allowing readers to judge for themselves the faults and virtues of what’s described. Indeed, the play insists, deciding who’s right and who’s wrong is not the journalist’s responsibility.

In the triangular conflict that preoccupies Politkovskaya the Russians fight Chechen rebels who are themselves involved in a civil war against Chechens aligned with Moscow. The carnage, cruelty, and hardships she depicts are as hellish as one can imagine. Human nature, as revealed in the callousness of the fighters and their leaders, hit rock bottom during the conflict.

Politkovskaya’s bravery and integrity, of course, are at the opposite end of the human spectrum. For anyone, much less a woman, to venture into such testosterone-fueled gruesomeness to interview its perpetrators and victims is astonishing. Each side finds in her reporting only what it chooses, putting her in danger from anyone who believes her writing is biased, since anything deemed negative is considered propaganda for the other side.

We frequently see similar things in our own news media. Just last week, New York Times reporter Matt Purdy was attacked for reporting that Rod Rosenstein suggested that Pres. Trump be removed from office via the 25th amendment. Purdy tweeted this Politkovskaya-like response: “Just because you don’t like the facts, don’t comfort yourself by dismissing the story as fake or credulous reporting. . . . It is the responsibility of The Times and the rest of the media to report the facts, however comforting or discomforting.”

Given Trump’s anti-media harangues, Intractable Woman is distinctly pertinent to our current political climate. The play itself, however, despite its heart being in the right place, makes no such overt connection. As directed by the increasingly prominent Lee Sunday Evans, Politkovskaya’s reportage is presented through three, excellent, young actresses, Nadine Malouf, Nichole Shalhoub, and Stacey Yen, dressed similarly in black, tailored men’s suits and white shirts (designed by Junghyun Georgia Lee). The impression they make is not of the journalist herself but of purely theatrical presences created merely to voice her thoughts.

Marsha Ginsberg’s setting, coolly lit by Masha Tsimring, is an official-looking hearing room, painted periwinkle blue, whose array of gold painted chairs, upholstered in red, is now and then precisely rearranged by the women, whose own movements form choreographic patterns. A portrait of Vladimir Putin hangs at one side, double doors are up center, flags hang from poles, and a desk with a microphone on it sits downstage. It’s as if we are flies on the wall behind the upstage-facing desk, attending a hearing. At the end, such a usage comes briefly into play.

No attempt is made to sharply differentiate one actress from the other, each delivering her lines in simple, direct address, maintaining a sense of sincere objectivity, like a committed newscaster, about the horrors being described. Never, even when engaging in one of several dialogue sequences with one another, do the women drop their urgent but detached tone to project the feeling of being immediately, personally endangered, disgusted, or angry.

Such pseudo-Brechtian distancing seems intended to emulate Politkovskaya’s facts, just the facts, m’am, style and to let the audience consider its own reactions to what’s being said. Preventing such an empathetic response, however, is the complete lack of contextualization. Audiences unfamiliar with the Russian-Chechnya issues will learn something of them from the narrative but with very little historical information or explanation. Helpful video projections of images and data, for example, are lacking. We don’t even hear Politkovskaya’s name until well into the play, and we’re forced to surmise that what we’re hearing are her own words.

That, though, would be a mistake, as Massini himself composed the words based on his research into the journalist’s writing, giving them his own authorial touch. One might then, perhaps, begin to question the veracity of his reportage of her reportage, which would surely get us into muddy waters.

Intractable Woman is a cleanly executed piece of docudrama deserving commendation for introducing an important socio-political subject. As a theatrical experience, however, it remains too dispassionate an account of material demanding a stronger jolt of passion.