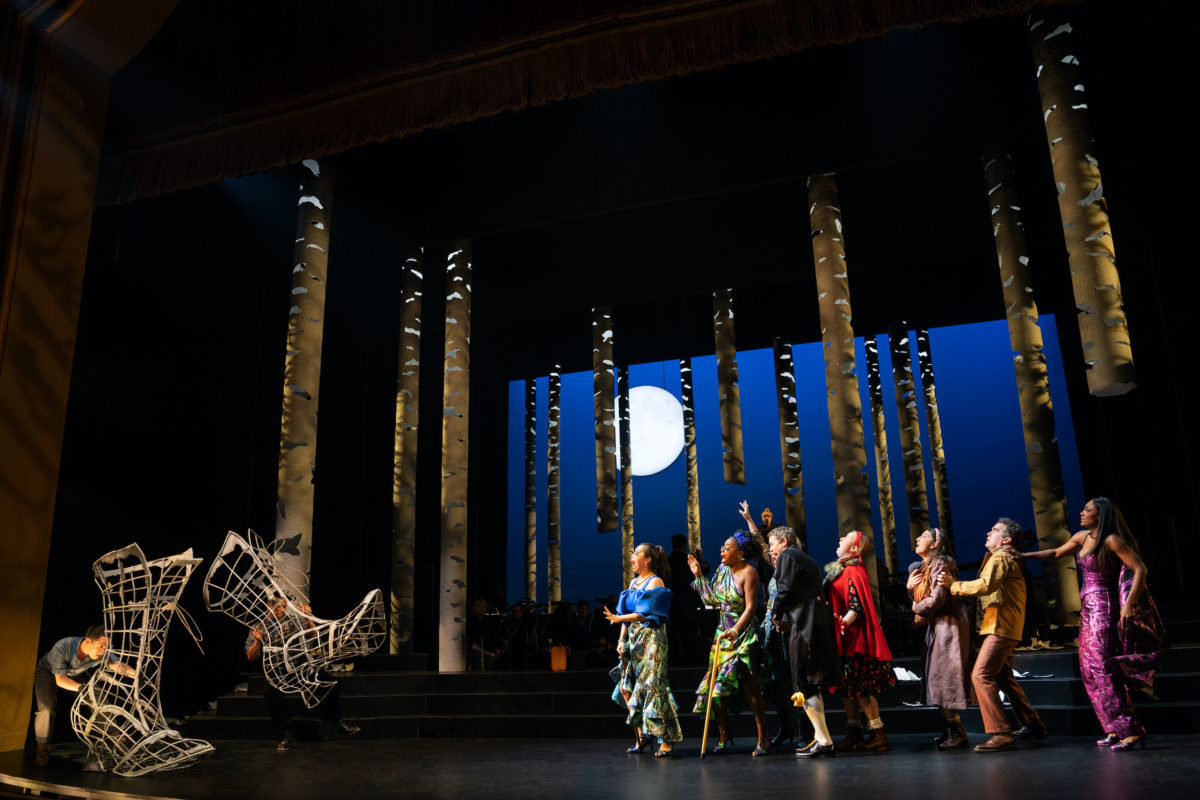 Cast of “Into The Woods”.

Nevertheless, I thoroughly enjoyed Lear deBessonet’s revival of Into the Woods, Stephen Sondheim and book writer James Lapine’s mashup of some of our favorite fairy tales from the French Charles Perrault and the German Grimm Brothers, which has recently transferred from Encores! to the St. James Theatre.

The list of the show’s attributes goes on and on. But top kudos must go to deBessonet, who made so many wise decisions. The most obvious is in the casting. Cole Thompson is the deliciously clueless young Jack. But Cinderella (Phillipa Soo) is not so easily fooled by charming princes. And speaking of charming princes, Gavin Creel and Joshua Henry make a perfectly ironic duo, especially in their iconic song, “Agony.”

Patina Miller is an imposing, but surprisingly human witch. David Patrick Kelly, who doubles as the Narrator and the Mysterious Man, keeps the show galloping along in both roles. And because even fairytales need a voice of reason, Into the Woods has the Baker’s Wife, a role Sara Bareilles plays with heartbreaking wisdom and humor.

The night I saw the show Jaxon Forbach, Brian D’Arcy James’ understudy, played the Baker, and Delphi Borich, Julia Lester’s understudy played Little Red Ridinghood. Both stepped in so smoothly and so well I couldn’t help but lament that understudies are so often under appreciated.

The second decision that works so well in this production was keeping David Rockwell’s set evocative but without too many details. A large moon hanging in the sky and floor-to-ceiling trees are surely enough to tell us we are going on a journey into the woods. And the three cottages/castles suspended over the stage seem to have popped out of an illustrated book of fairytales.

Another principal delight of the show is puppet animals. A swarm of birds advise Cinderella. But Milky White, Jack’s cow steals the show when puppeteer Kennedy Kanagawa has her registering fright, indignation or joy in reaction to her fate. Even better is Kanagawa’s expression when the cow is taken away from his able hands.

Into the Woods is arguably Sondheim’s lightest and funniest work. And this production is appropriately filled with vamping, playful overacting, pratfalls and ironic winks to the audience. But after everyone has their dreams fulfilled, comes the second act. And now we find out that “Be careful what you wish for” is not just a piece of easy wisdom.

Indeed, act II presents one of Sondheim’s grimmest views of mankind. Prince Charming is not faithful. Mothers cannot protect their children. Friendship is fragile. Innocence is an illusion. If there is a message of hope, it’s pretty slim, although it comes in a gorgeous song: “No One Is Alone.”

Into the Woods may teach us that most often no one lives happily ever after, but it also maintains that throughout life we will find many moments of beauty and pleasure. Surely Into the Woods Is one of them.