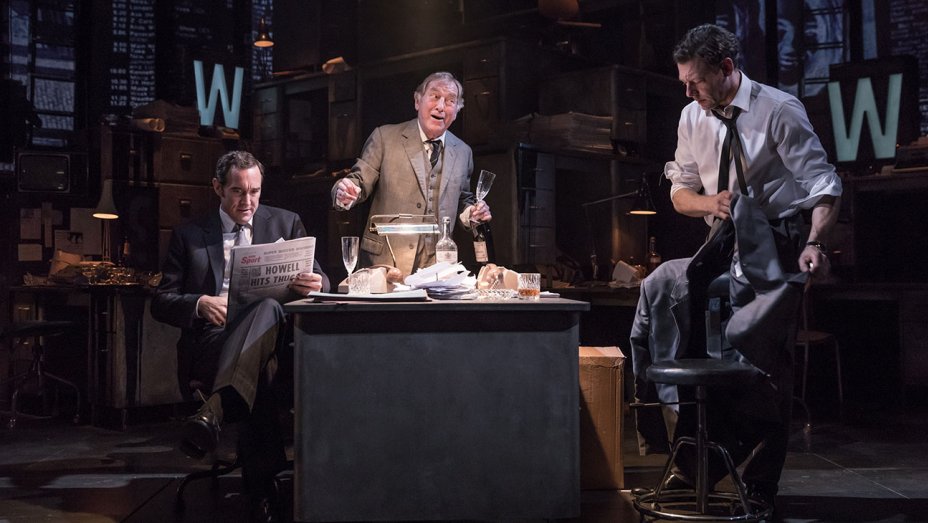 Directed with vigor and imagination by Rupert Goold, this British import features Bertie Carvel as the Australian newspaper mogul Rupert Murdoch, and Jonny Lee Miller as Larry Lamb, the veteran newspaperman he lures into his lurid and lucrative schemes. Only in 1969, the year in which the play is set, Murdoch is still an outsider fueled with resentment and ambition, and Lamb has certain reservations.

These reservations are quickly discarded. Before long, Lamb assembles a loyal and reckless band of hacks who use gifts, gossip and gimmicks to turn Murdoch’s newly purchased, dying Sun into a rising star.  In fact, they go to such extremes that at one point even Murdoch is uncomfortable. But not enough to stop the process.

Goold keeps the play moving at a pace that reflects the frenzied energy of the paper and its staff. Although all of the action is set against Bunny Christie’s tower of steel desks, we are taken into several of London’s chicest spots where Lamb and Murdoch plot their takeover of Fleet Street.

Here we have some of the most cringe worthy conversations ever put onstage. Carvel is the perfect evil genie; he can’t even stand straight. Miller, almost without effort, takes on the characteristics of Lamb’s mentor. However, it’s not what the duo says that’s so awful but rather their complete lack of concern with the consequences of their actions. They are too amoral to even be satisfactory villains.

Nevertheless, the first act seems to meander a bit. Unless you’re really interested in how reporters decide what’s “fit” to print, much of the conversation is just shop talk. After intermission we are, if not exactly rivetted, much more engaged.

The second act takes us to the inevitable results of Lamb and Murdoch’s thirst for money and power. Lamb is determined to beat the competition on the anniversary of Murdoch’s takeover, even if this means destroying the life of one woman and causing the death of another. This is depths to which media has descended, Ink tells us.

Ink is based on real life events, so it is possible Graham did not want to stray far from the truth. Still, if at this point Graham and Miller had made Lamb come to realize he’s sold his soul, Ink might have risen to the heights of Shakespearean tragedy. Lamb could have been the Macbeth of the 21st century. Unfortunately, Graham is more interested in social commentary than character analysis.

Ink may be a play for our time. It is not one for the ages.