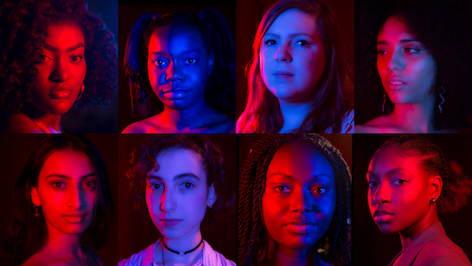 The internationally renowned and award-winning ensemble GIRL BE HEARD
http://girlbeheard.org/indivisible/ presents their new show Indivisible: Liberty and Justice for Who? at DR2 Theatre (103 E 15th Street) for eight performances only through May 12th. Based on the lived experiences of the cast, this ensemble-devised theatre work is written and performed by the GIRL BE HEARD members, directed by Kim Sykes, and produced by theater-maker and activist Jessica Greer Morris. All performances will be followed by 15-minute talkbacks, featuring politicians, women’s rights activists and social justice advocates.  Tickets are $26 and can be purchased from Ticketmaster online at ticketmaster.com  or by phone at (800) 745-3000.  In addition, $11 student/senior tickets and $51 Fairy Godmother tickets (which include a donation to Girl Be Heard) can be purchased at the box office.

“With a take no prisoners attitude, the cast of Indivisible takes a swipe at the American Dream by facing its realities head on,” says Kim Sykes, Director. “They bravely confront the myths of democracy and offer solutions to making America truly great.”

“Girl Be Heard is proud to amplify the voices of eight inspiring young leaders working to raise awareness about, and put an end to, the epidemic of sexism, racism and xenophobia sickening our country. Join us as we celebrate the voices of the next generation working to make good on America’s promise of justice for all,” says Jessica Greer Morris, Girl Be Heard’s Executive Director.

“They will inform, delight, alarm and help you to reawaken that authentic voice that still lives within you.” – Gloria Steinem on GIRL BE HEARD

GIRL BE HEARD develops, amplifies and celebrates the voices of young women through socially conscious theatre-making. GIRL BE HEARD promotes racial, gender, and economic empowerment by providing New York City’s girls with a unique social justice education and mentoring program that tackles the obstacles they face and provides strategies to overcome them. Building self-esteem and growing individual talents is how we empower young women to become leaders and activists in their communities. Incorporated in 2011, GBH directly serves over 200 new participants per year through direct, year-long programming, and thousands more through community performances and workshops in schools and public venues across NYC. Co-founder Jessica Greer Morris continues to lead GBH as Executive Director.

GIRL BE HEARD’s performances have toured internationally and received critical acclaim from The White House, The United Nations, the New Yorker, The New York Times, The Huffington Post, Ebony Magazine, National Public Radio, and media outlets across the globe. The collective has written and performed award-winning shows including: Girl Power: Survival of the Fittest; Project Girl Congo (commissioned by Panzi Hospital USA and performed in the White House); Child Bride (commissioned by the United Nations Girl Up Foundation and presented as a five-city tour); Trafficked, about girls in New York City enslaved in the sex trafficking industry; 9mm America, exploring America’s culture of gun violence; DISPLACED, examining displacement, homelessness, and the consequences of conflict in the U.S. and abroad; Embodi(ED), illuminating girls’ struggles with body image, eating disorders, and the $55 billion dollar diet industry; and Blurred Lines, exploring the meaning of consent, the normalization of rape culture, and how girls navigate and survive in a world where 1 in 5 college women are sexually assaulted.

In recognition of their human rights work with activists, advocates, and survivors from around the world, in July 2015 the United Nations named GIRL BE HEARD an official non-governmental associate organization for the United Nations’ Department of Public Information – an affiliation granted to most prominent and vocal human rights NGOs worldwide.

Kim Sykes (Director) has a 20 year record of performing, teaching, writing and activism. She is an actress, having appeared on stage, television and film. She is also a union activist, a political coach and has worked as a teaching artist with SUNY Purchase Continuing Education and Manhattan Theater Club School programs. Recently Kim played Detective Sluser on the Showtime series, “Homeland.”

JESSICA GREER MORRIS (producer) is the co-founder and executive director of GIRL BE HEARD, a ​social justice activist, grassroots organizer, ​​published playwright​, performer, cabaret singer, and public health expert. She has been featured as one of Newsweek’s 2012 “150 Fearless Women Who Shake Up The World” and awarded the 2013 SELF Magazine’s “Women Doing Good Award,” among other accolades​ for her innovative leadership at GIRL BE HEARD.​ ​She has produced theatrical work for the United Nations, TED Women, the White House, NYC Fringe Festival, the Estrogenius Festival and spearheaded numerous GIRL BE HEARD State-Department public diplomacy tours to raise awareness about human rights issues affecting women and girls.

The playing schedule for Indivisible is as follows: Wednesdays, Thursdays, Fridays and Saturdays, May 2-5 and 9-12 at 7pm.

Wed, May 2, 7:00 pm – Talkback with Tia Davis, Artist-in-Residence at The bell hooks Institute.