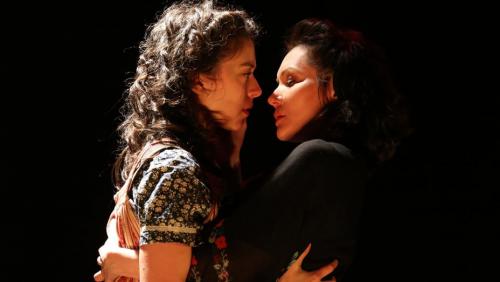 Signature Plays, a triple bill of one-acts by revered playwrights in celebration of Signature Theatre’s 25th anniversary, offers bizarre examinations of death, loneliness, and race. Both shows are not for the easygoing theatergoer who just wants to sit back and be entertained. They ask you to think about what the plays mean and how they reflect your world.

In Rebecca Taichman’s brilliantly imaginative staging, Indecent follows the long path of the little-known Yiddish drama God of Vengeance from acclaim in Europe to a controversial Broadway premiere resulting in the arrest of the cast. Written in 1906 by Sholom Asch, Vengeance centers a Jewish brothel-owner who strives to keep his family life separate from his business. But when his virgin daughter falls in love with one of his prostitutes, his two worlds collide and his hypocrisy is exposed. Despite featuring sympathetic views of hookers and a lesbian relationship, the play was a dramatic smash in Berlin and across the Continent. After a staging on New York’s Yiddish Second Avenue district, it moved uptown to Broadway in an English translation but closed after being raided by the police when a rabbi filed a complaint calling the play immoral. The show closed after only a few performances and the author, now moved to America after fleeing the horrors of Europe, never wrote another work for the theater.

Vogel uses this daring play’s trajectory to create a history of Jewish and gay struggles in the first half of the 20th century. From acceptance in the capitals of Europe to demonization and destruction by the Nazis to blacklisting in the 1950s, the performers who stage God of Vengeance strike out to be heard. Vogel traces their artistic battles with passion and flair.

Taichman creates numerous staggering yet simple stage effects. Most striking is the introduction of the main characters by the enthusiastic but awkward stage manager Lemml (a heartbreaking Richard Topol). As each comes forward they dance to music provided by the three-piece onstage band and dust copiously falls from their sleeves. The dust represents both the fleeting, ephemeral nature of theater and the fate of many of the characters, victims of the Holocaust. In addition to Topol, the six actors and three musicians create a kind of fascinating cultural cabaret.

The Signature Plays take an equally unconventional route. Each represents an absurdist view of its subject and has received a previous production during Signature Theater’s quarter century. Edward Albee’s The Sandbox (1959) provides a darkly comic take on mortality and jabs at middle-class suppression of emotion. The 20-minute cartoon takes place on a blazingly bright beach (Mark Barton’s lighting is appropriately summery.) Archetypical suburbanites Mommy and Daddy dump Grandma in the sand and await the Angel of Death who turns out to be a gorgeous young man performing calisthenics. Phyllis Somerville sharply delineates the feisty-to-the-end Grandma’s final exit while Alison Fraser and Frank Wood are wickedly funny as the shallow Mommy and Daddy. Ryan-James Hatanaka gets laughs as the muscular but brainless messenger for the inevitable. In Sandbox, Albee greets the unknown with a sardonic chuckle rather than a scream of terror.

Maria Irene Fornes’ Drowning (1986) is much bleaker and more confounding. In what appears to be a desolate bus station or cafe, three human-like mud creatures moan over the failed love affair of one of them. The play was written in response to a Chekhov short story, but this staging is so slowly paced and obscure it fails to generate any of the insights of the human condition usually associated with the Russian master. This despite Mikeah Ernest Jennings’ shattering portrayal of Pea, the afflicted mud man. It doesn’t help that there is a dull nine-minute pause to change scenery between the Albee and the Fornes pieces filled only with an actor (Nicholas Bruder) listening to a radio. 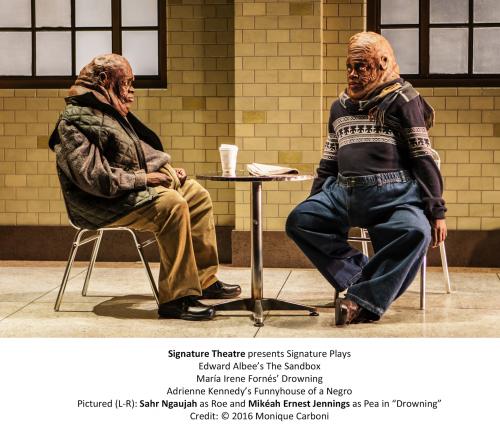 The uneven evening concludes with Adrienne Kennedy’s Funnyhouse of a Negro (1964). This Obie-winning nightmare of a play is set inside the mind of Sarah, a self-hating African-American academic who identifies with such Caucasian figures as Queen Victoria and the Duchess of Hapsburg. While yearning to be white, cool, and emotionless, she is haunted by reminders of her race, especially her father, represented by Patrice Lumumba, the assassinated leader of Congo. These fantasy figures—Jesus Christ is another one—skulk through Mimi Lein’s grim set as Brandon Wolcott’s spooky original music plays.

Funnyhouse has its moments of effective anguish, mostly provided by Crystal Dickinson’s tormented Sarah. But Lila Neugebauer stages this hour-long piece like a Hammer House of Horror screamfest, punctuated with total blackouts and crescendos. (In an annoying distraction, the safety lights for the theatre aisles keep snapping back on after each submersion in darkness.) Too bad Neugebauer only gets the right tone for the witty Sandbox. She lets Drowning drown and Funnyhouse is more like a haunted house. 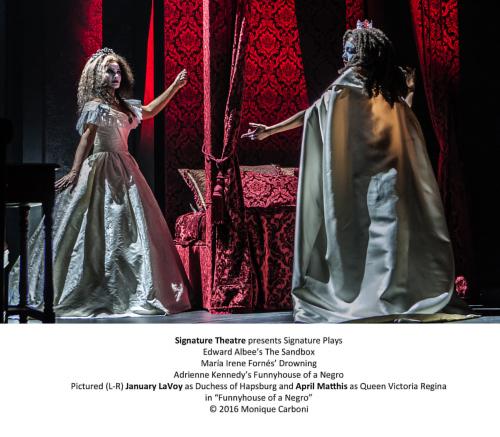 Originally Published on May 24, 2016 in ArtsinNY.com