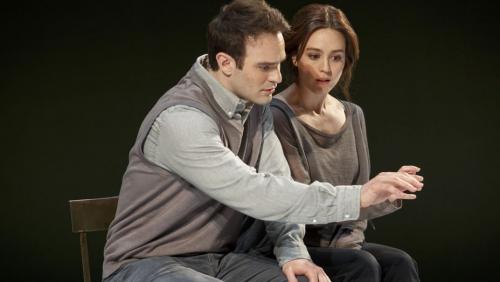 The casts of both perform admirable feats—the Cirque troupe flips, bounces, tumbles, and soars all over the stage and into the house of the Lyric Theatre, while the four actors in Incognito juggle multiple roles with dexterity. The former show is a brainless entertainment while the latter is all about the brain. Each achieve their goals and offer theatrical pleasure, but of very different kinds.

Cirque’s Paramour is nothing more than a tissue-thin excuse to trot out the various acrobatic routines for which the Canadian troupe is famous. If you go looking for clever dialogue or memorable songs, you won’t find them. However, if you come in expecting spectacular circus-themed joy, it’s here in abundance. The ridiculous story takes place in the Golden Age of Hollywood with maniacal director AJ pulling the Svengali routine on singer Indigo who is in love with struggling composer Joey. That’s it for the plot.

It’s telling that in the numerous creative credits on the title page of the jumbo-sized program—everything about Cirque du Soleil is big—no one is listed as writing the execrable book. (The songs by no less than five different authors are generic at best.) Only West Hyler gets a nod for “story” along with being “Associate Creative Director and Scene Director.” Hyler is joined by Phillippe Decouple as “Director and Conceiver” and Shana Carroll as “Associate Creative Director, Acrobatic Designer and Choreographer.” With so many stagers involved, it’s no wonder the production is confusing. There’s no single clear vision at work and too much goes on at once. 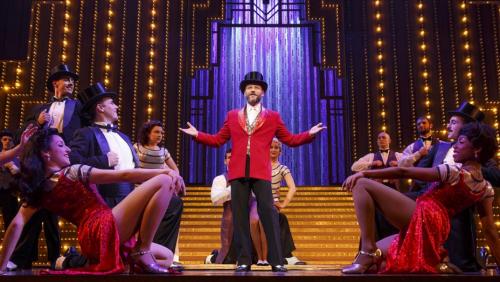 Jeremy Kushnier and cast of Paramour

A restaurant scene where AJ discovers Indigo singing becomes an overcrowded mash-up of dancing, juggling, and clowning. You don’t know where to look in order to follow the action. Fortunately there is enough high-flying pizzazz taking center stage to make the overall show worth enough “oohs” and “ahhhs” to justify your time. The fictitious film AJ creates for his new star serves as a platform for a succession of elaborate set pieces which are diverting and fun, if totally unrelated. (If this movie were ever edited together it would be ever more of a mess than Paramour itself.) The most thrilling of the sequences belongs to gorgeous twin brothers Andrew and Kevin Atherton who soar above the stage and the pitiable story in a breathtaking, more-than-slightly homoerotic aerial strap act. The climactic chase scene with the lovers fleeing AJ’s thugs is deliriously goofy, resembling one of those weekly fisticuff fests on the 1960s Batman series with performers bouncing off unseen trampolines.

There is also an intricate pas de trois avec trapeze with dancer-aerialists Martin Charrat, Myriam Deraiche and Samuel William Charlton beautifully expressing the otherwise banal love triangle among the leads played by Jeremy Kushnier, Ruby Lewis and Ryan Vona, all of whom possess impressive legit-musical chops, but are hopelessly upstaged by the Cirque shenanigans.

The four-person cast of Nick Payne’s Incognito get a more balanced workout in Doug Hughes’ fascinating and challenging production presented by Manhattan Theatre Club. Each plays a variety of roles in three separate storylines concerning the effect of the brain on personality and memory. At first, they seem unconnected but by the end of 90 intriguing minutes they are bound inextricably together like strands of DNA. A pathologist steals Albert Einstein’s brain to find a physiological cause for genius. A neurologist’s personal and professional lives collide when she embarks on her first lesbian affair. A man’s memory deteriorates over several decades but he still recalls his love for his wife. Geneva Carr, Charlie Cox, Heather Lind, and Morgan Spector achieve the dramatic equivalent of the Cirque company’s acrobatic feats with their limber and life-like limning. Kudos also to Ben Stanton’s lighting for creating a variety of environments on Scott Pask’s spare disk-like space.