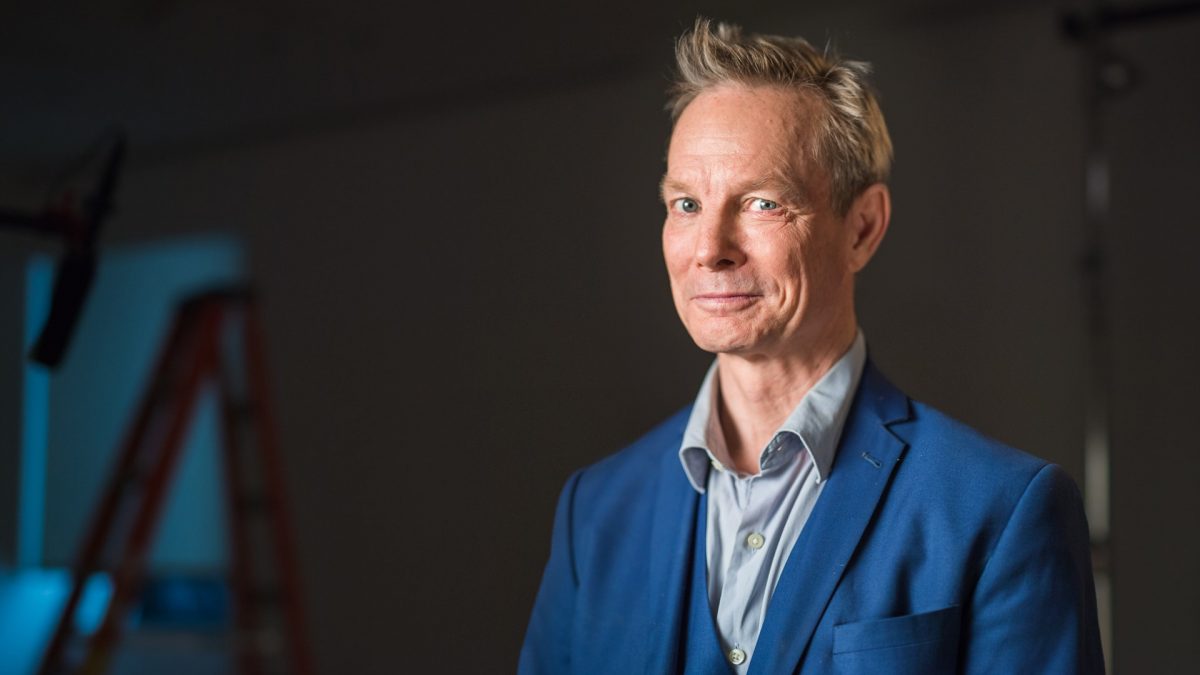 This is the second major play written specifically for the Zoom platform—Richard Nelson’s What Do We Need to Talk About? being the first. One older man (Irwin) reaches out to a younger one (Christopher Fitzgerald) in the time of Coronavirus to read inspirational passages from the Bible. They bicker, debate the merits and drawbacks of the technological means of communication and discover they can reach each other in new ways. Employing his elastic limbs Irwin appears to extend his hands into Fitzgerald’s frame and vice versa. They suspend their features simulating a freeze frame and speed up and slow down their speeches. During the world premiere viewing, there was an ironic stoppage of the action, so it was impossible to tell if the actors or my computer were freezing.

In the short running time, the pair run the gamut from clownish antics to world-weary despair to a genuine bond as they recite the benedictions. “Maybe you can come over,” Fitzgerald asks Irwin as they’re about to sign off. But then both realize that’s not possible and the look of sorrow on their faces is shattering.

This brief encapsulation of how we are living now is only available on the Old Globe’s website for a shockingly short time. Perhaps because of union issues, perhaps to recreate the sense of urgency and immediacy theater brings. While stages are closed nationwide, we will have to settle for filmed past performances from mostly British and Canadian companies such as the National Theater, Shakespeare’s Globe, and the Stratford Festival. The latter two are streaming previous incarnations of wildly different Macbeths. Shakespeare’s Globe’s version of the Scottish Play is a pared-down 90-minute edition for high-school students. The performance captured takes place on a rainy day with the kids standing in the open pit in rain gear and getting wet because of the open roof structure, recreating the original Globe from the Bard’s days. The dismal weather provides a fitting backdrop for director Cressida Brown’s ghoulish production. The witches emerge from a pile of dead bodies and later pull fetuses out of the leftovers from Macbeth’s banquet to add to their hellish cauldron. Division between Scotland and England are given contemporary resonance. Ekow Quartey delivers a muscular, threatening Macbeth and Elly Condron adds a dimension of feminine, maternal love to the usually devilish Lady Macbeth who is pregnant in this staging. The Stratford Festival’s unedited Macbeth is competent and more conventional, but less viscerally exciting. Visual excitement is caused whenever Ian Lake as Macbeth frequently removes his shirt to expose a brawny torso, but it doesn’t make up for a lack of dramatic tension. There are some scary moments in Antoni Cimolino’s production such as the lightning-flash transition from Banquo’s murder to the banquet scene, but the performances are mostly one-note and there are few genuinely affecting emotions conveyed.

PBS is offering some of its video presentations—including a third Macbeth starring Patrick Stewart—but most Broadway musicals are not available. There have been consolations with special benefit performances created for the web such as the recent Stephen Sondheim 90th birthday tribute and a Mother’s Day celebration with the casts of all the shuttered Broadway shows. There is still no official re-opening date of the Main Stem. The Broadway League has announced the Great White Way will remain dark until at least Sept. 6, but with no vaccine or treatment for the Coronavirus likely by then, sometime in 2021 is a more likely target. Wintertime is a traditionally slow period for attendance, so we will probably have to wait until spring of next year at the earliest. The revival of Plaza Suite and MJ, the Michael Jackson musical, originally planned to start during April and August respectively, have already announced they will now open in the spring of 2021. Disney has announced Frozen will not be coming back to the St. James after the hiatus. There will likely be more permanent closings in the months to come. In the most disheartening news of all, CBS will replace the Tony Awards with a sing-along broadcast of the film version of Grease. Couldn’t they have run the Sondheim salute or a special Zoom concert of Broadway stars celebrating their shuttered shows?