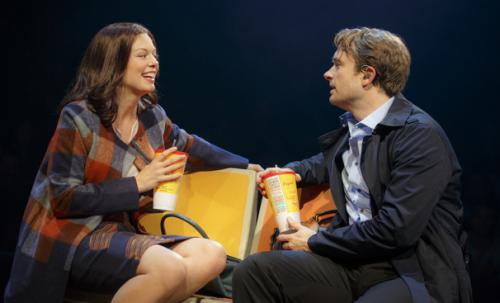 Transportation plays a part in two new stage productions in NYC and while they both have a few pleasant stops along the way, the ride is over familiar territory. In Transit has taken the long route to Broadway. After Off-Off-Broadway iterations in 2004 and 2008 and a Drama Desk Award-winning Off-Broadway run in 2010, this mildly entertaining, but cliched musical has pulled into the Circle in the Square. The chief attraction here is a novelty gimmick of being Broadway’s first a cappella tuner. This has caused some theatre pundits to wonder if consumers will be willing to play Main Stem prices for a show with no orchestra. But Deke Sharon’s arrangements and the scintillating vocalizing of the 11-member cast create a dazzling illusion of one.

The problem is the book, credited to Oscar winner Kristen Anderson-Lopez (Frozen), James-Allen Ford, Russ Kaplan, and Sara Wordsworth who also wrote the score. Sidenote: When you have four people—with another two, Karla Lant and Gregory T. Christopher—collaborating on a musical, it’s bound to be uneven. The story follows a group of interconnected New Yorkers (fired Wall Street-er, aspiring actress, gay coping coping with the closet, transplanted West Coast young woman getting over a break-up) as they attempt move on romantically and career-wise while negotiating the city’s subway system. A beatbox artist (played at alternate performances by Chesney Snow and Steven “Heaven” Cantor) provides commentary and sound effects. At the performance attended, Snow offered startlingly whimsical beeps, clicks, and buzzes. While Snow and the tunes are upbeat and inventive, we’ve heard these people’s stories and the humor before. The jokes reference subway inconveniences (indecipherable announcements, delays, broken turnstiles and fare machines) and ads (the dermatologist Dr. Zizmor, lessons in Chinese) we’ve been putting up with for decades.

From what I recall of the 2010 production at the 59E59 Theater, Kathleen Marshall’s new staging is tighter and cleaner — Donyale Werle’s flexible set with a moving walkway helps keep the transitions swift and smooth —plus the book has been streamlined. The hard-working cast is enjoyable, particularly Erin Mackey as the dejected love refugee desperately and  hilariously trying not to stalk her ex on social media and strong-voiced Moya Angela in a variety of roles including the personification of the underground train system (Kudos to costumer Clint Ramos for the fabulous frock made of Metrocards she wears.) But In Transit remains a forgettable trip as soon as you step off. Watch the closing doors.

Richard Greenberg’s The Babylon Line, at Lincoln Center’s Off-Broadway Mitzi E. Newhouse Theatre, also uses a train system as a central metaphor and has familiar situations and characters
but not as shopworn and shallow as those in Transit. The main conceit has struggling Greenwich Village-based author Aaron Port (a solid Josh Radnor) taking the titular reverse commute to 1967 Levittown, Long Island to teach a creative writing course to bored housewives (funny and moving Randy Graff, Julie Halston, and Maddie Corman) and assorted misfits (intriguing Frank Wood and Michael Oberholtzer). Of course there is a stunningly talented student (valiant Elizabeth Reaser) who just happens to be pretty and sports a Southern accent and eccentric past right out of a Flannery O’Connor short story. The teacher and pupil’s electric connection is the juice of the play along with Greenberg’s pointed observations on nonconformism and literature. In his previous works such as Take Me Out, The Violet Hour, and Three Days of Rain, the playwright can get too wordy with the characters just sounding like they swallowed dictionaries. Even though the theme is literary aspiration, Greenberg wisely avoids verbosity and celebrates the power of stories to transform and inform.

The voyage of Kaija Saariaho’s modern opera L’Amour De Loin was not as smooth at the performance attended at the Metropolitan. As he did with his famous Ring Cycle, director Robert LePage has installed a gigantic machine at the center of his staging. This time it’s a sort of moving staircase which looks like an oil derrick. This monster malfunctioned and caused a delay between scenes (similar mishaps with machinery occurred the Ring). Despite the slight technical snafu, LePage’s gorgeous production of this shimmeringly beautiful meditation on love from afar (a translation of the title) hypnotizes. Michael Currey’s glittery seascape of a set becomes a living, breathing entity thanks to “lightscape image designer”(that’s a new credit) Lionel Arnould.

Saariaho’s 2000 work has been criticized for its lack of action. The only things that happens is a troubadour falls in love with a distant noblewoman, travels across the sea to meet her, and promptly dies when he arrives. Yet the magnificently rich vocals of Eric Owens as the pining musician, Susanna Phillips as the object of his affection, and Tamara Mumford as the seafaring pilgrim who brings them together make this an operatic journey worth savoring. 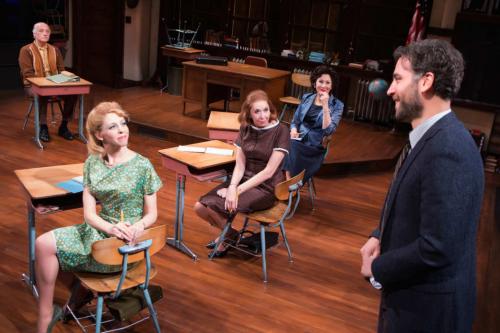 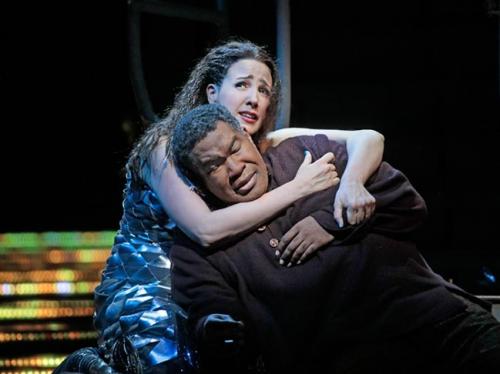