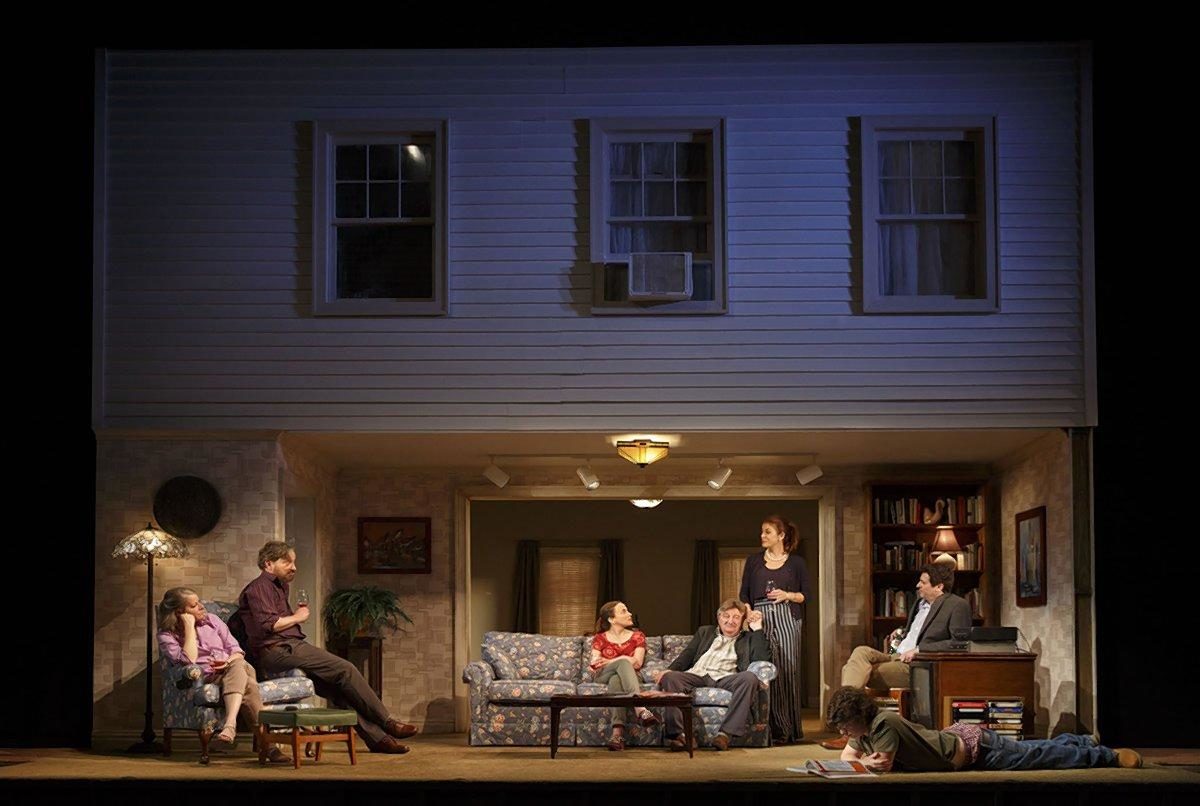 Set in a white, upper middle class neighborhood in Washington D.C., around 2000-20001, these are “hard times.” The Israeli-Palestinian peace talks have collapsed; it’s days before 9/11; there is “another Bush in the White House.” And Michael (Jeremy Shamos) has just published his academic treatise, suggesting that we forget the Holocaust, and the death-obsessed culture, which it inculcates.

To his Jewish family, this is like inviting a suicide bomber to lunch. And the trustees of the University where Michael is up for tenure don’t feel too differently. To his credit, Michael’s book speaks to the hazards of American chauvinism and the crisis over immigration. And, for American Jews, it raises the question of what we have really learned from our history.

Regardless, the entire family arrives at the home where they all grew up, and where their father, Lou (Larry Bryggman) is living with the youngest of the three siblings, Sharon (Maria Dizzia).  The occasion is Lou’s 75th birthday. Clearly, the favorite sport is family sparring, with its focus on caring for the ageing patriarch, who can no longer take care of himself. That discussion, about money, brings out everyone’s ugly secrets.

That the two acts run by so quickly in spite of the of fairly well-worn material. Credit must go to the outstanding acting ensemble. Shamos, who has the gift of making every character look and feel like it’s just him, reveals Michael’s hypocrisy, which is so finessed, even if the character doesn’t recognize it. But clearly, Michael, who is devoted to the life of intellect, cannot live by the values he professes.

Bryggman who remains one of the great voices of the New York stage, portrays the aging Jewish merchant with crackling wisdom.  We respect his insights, especially when he describes his experience as an American soldier, liberating Dachau.  As his most devoted child, Sharon appears transparent and somewhat one-dimensional, but in Maria Dizzia’s hands she, too, emerges as an unresolved and complex character. The others, including a highly acquisitive Ellen (Tasha Lawrence) and her liberal wealthy philandering husband, Howard (Gary Wilmes), and Michael’s overlooked wife Holly (Kate Walsh) mesh into this tangled dystopian web.

Firmly directed by Daniel Sullivan, the production is engaging – not to mention moralizing. An ingenious set by Derek McLane shows us the characters on two levels – with the bedrooms upstairs and the living areas downstairs. Indeed, there is a kind of double speak going on. Clearly, when it comes to mining the language of parent child relationships, Levenson (Dear Evan Hanson), is a remarkable bard.