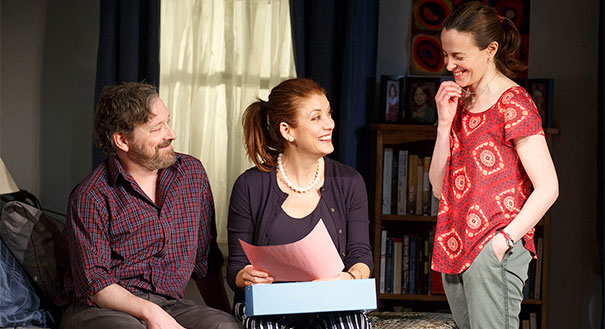 Such is surely the case with Steven Levenson’s well received If I forget. The play is not only about the trials and tribulations of the three Fischer siblings, their spouses, children and father, but also the political situation under George W. Bush, the Arab-Israeli dispute and the dilemma of assimilated Jews in the United States. This is quite a bit to handle, but in the hands of director Daniel Sullivan and his more than excellent cast, this play succeeds even where it shouldn’t.

Michael (Jeremy ) is Jewish; his wife Ellen (Trisha Lawrence) is not. But despite Michael’s antagonism toward religion (especially Judaism), their emotionally troubled daughter, Abby, seems to have found stability and a source of strength in her father’s abandoned religion.

As the play opens, Abby is in Israel through the Birthright Israel Experience. And Michael, who for some reason that is never made clear, is a professor of Jewish studies, has made the foolish (and unlikely) decision to publish a book suggesting it’s time to forget about the Holocaust at the exact moment when he is up for tenure at his university.

Michael’s elder sister Holly (Kate Walsh) lives a comfortable life with her second husband, Howard (Gary Wilmes), and her son, Joey (Seth Seth Steinberg), an adolescent who may be somewhere on the autism spectrum, but may be just suffering from a serious case of nerdishness. When Holly is not arguing with her two siblings, she’s dreaming of becoming an interior designer, or she’s nagging her son about his consumption of sugary beverages and the way he wears his pants.

The youngest, Sharon (Maria Dizzia), is a kindergarten teacher who is having an affair with Rodrigo, one of the Guatemalans who rent their father’s store. When their mother was dying of cancer, Sharon was her mother’s main caregiver, and in the declining years of their father, Lou (Larry Bryggman), she has now taken on the same job, something she never lets the others forget.

Derek McLane has created a wonderful rotating, two level set that allows for the siblings to argue all over their father’s Washington, DC house: upstairs in the bedroom, downstairs in the dining room. They argue over their Jewish identity, Israel, U.S. politics, and old grudges and griefs. Levenson has provided witty, swiftly moving dialogue that keeps the audience both thinking and laughing. Each of the siblings has cogent arguments and a good deal of evidence to back their beliefs, both political and personal. And they certainly know how to get under each others’ skin.

If nothing much happens in the first half of the play, the second half makes up for this shortage with a dizzying series of events that are more unbelievable than surprising. These events (involving, strokes, credit cards and pregnancy) test the family’s love, their loyalty and their values.

One could say If I Forget is messy because life is messy. Playwrights are not required to provide solutions to the problems they raise. But they are required to take on only what they can handle.

Levenson does an admirable job juggling the many issues he brings up. But even with this tremendous cast and accomplished direction, there are more than a few issues that could have easily been left out.