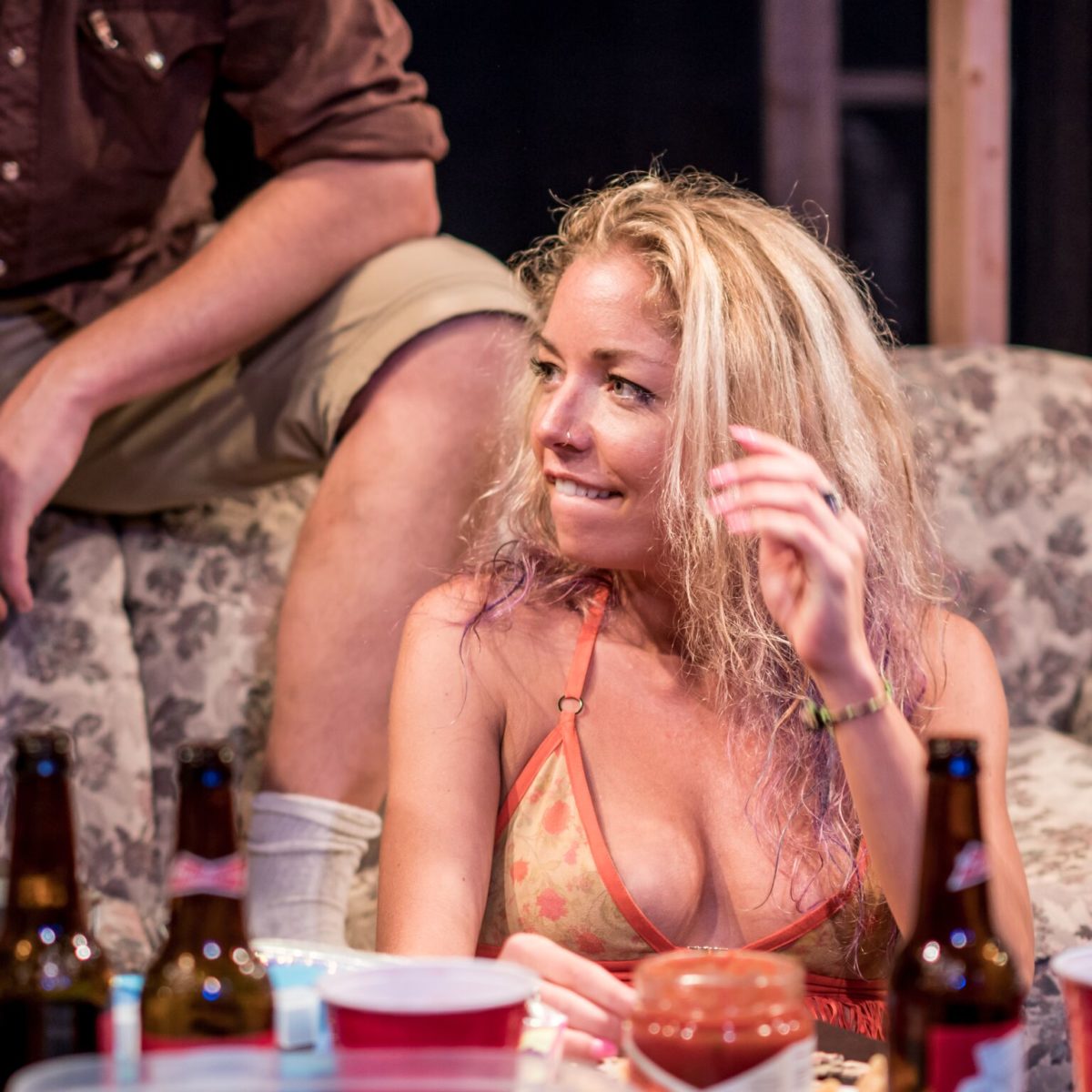 The 40ish lovers we discover in flagrante delicto are each married to someone else. Macon, who seems to be a cocktail waitress, is the wife of Dana’s closest friend, Todd (Michael Abbott, Jr.), who’s recently lost his second-rate job. Dana, who owns a frame shop, is wed to Caroline (Booker Garrett), presumably pregnant. Both men are the frustrated shadows of youths with once promising futures—Todd as a baseball player, Dana as a mathematician—that foundered on unexpected circumstances.

Thigpen brings these four wounded, potentially volatile figures together at Macon and Todd’s for a “hurricane party,” a gathering infused with booze, guns, drugs, sex, and rock and roll. There, the juiced-up revelers will, rather than evacuating the area, wait for the fierce storm outside to diminish as they cope inside with their mutual emotional stress.

Joining them midway are two more women, a checkout clerk named Tammy (Lacy Marie Meyer), whom Macon met that day while shopping, and Tammy’s friend, Jade (Toni Lachelle Pollit). Tammy comes equipped with a bagful of dope and a firearm. Tammy and Jade’s presence also lets Thigpen toy with bi- and homosexual undertones. On the other hand, the casting of Jade with an African-American actress doesn’t lead to the implications it might, in this context, otherwise suggest.

Chiefly responsible for the constant storm and stress is Todd, loud, immature, and so obnoxious it’s hard to see why anyone would want to be around him, much less be his friend. Aware that Macon has been having an affair, and using the excuse of their good ol’ boy palship to abuse Dana, whom he suspects, Todd helps fuel several potentially dangerous situations.

A baffling scene concludes the play when, for no reason, it seems that the house is under attack from a drive-by shooting using automatic weapons. Checking the script, I learned it was something else entirely, although equally puzzling, one of the few times that sound designer Eric Glauber and lighting designer Miriam Nilofa Crowe aren’t up to snuff.

At times, this hurricane party suggests a less literate version of Who’s Afraid of Virginia Woolf?, with Todd and Macon being George and Martha to Dana and Caroline’s Nick and Honey; in fact, Martha, you may recall, mistakenly thinks that Nick, a biology professor, teaches math, Dana’s forte. There’s even a suggestion of parental longing in Todd’s obsession with his missing dog, a theme underlined by Caroline’s announced pregnancy and Macon’s inability to conceive.

Todd speaks in a vivid, if overwrought, lingo that belies his lack of education. But everyone else also uses heightened language—crude, colloquially slurred, grammatically jumbled, and vividly animated—that seems more stagey than realistic. The accents (coached by Stephen Gabis) are so strong not every word is clear, making the actors sound more like the Georgia rednecks in Deliverance than what one might expect from the lower-middle class residents of the historic city of Conway. Compared to these characters, Sen. Lindsey Graham, who also comes from South Carolina, sounds like Sir Ian McKellen.

While I’ll defer to native South Carolinian Thigpen on the accents, I’m curious as to why—absent an explanatory program note—a play set in recent times names its hurricane Evelyn. There was, indeed, a Hurricane Evelyn, which hit the NE (Nova Scotia, mainly), but it occurred in 1977 and came nowhere near Conway.

Frank J. Oliva’s set on the Cherry Lane Theatre’s small studio stage is like the x-ray of a house, showing the beams holding up the nearly invisible walls. Several early scenes are written so the interior can be used simultaneously by the two chief couples, each in their own home, as in an Alan Ayckbourn play. Walls made of scrim allow Crowe’s lighting to help us see through them when necessary. Her skills are especially useful during the long stretch when the power goes out and the actors employ flashlights and lanterns to illuminate the space before dawn gradually arrives.

None of the characters, each suitably dressed by Louise Ingalls Sturges, is particularly likable but the ensemble, smoothly directed by Maria Dizzia (best known as a fine actress), does its best to make them behave convincingly, however unconvincing may be the circumstances or the characters themselves.

Hurricane Party lasts only 90 minutes but it doesn’t take that long before you feel the party’s over.