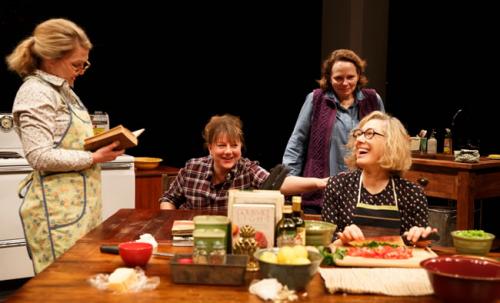 One of the few exceptions is Richard Nelson whose penetrating and subtle works often provide a double focus on the private and the public. From 2010 to 2013 he wrote a series of plays for the Public Theater featuring the same cast about the Apple family of his native Rhinebeck, New York. Each work took place on a significant day and reflected how the likes of Obama, Clinton, and Romney seeped into the Apples’ troubles with death, senility, and sibling rivalry. There wasn’t much “plot” in this quartet, just the family gathering, talking about current events, reading from old books and letters, and discoursing on the state of themselves and the country at large. Through arguments, anecdotes, and revelations on life, love, and work, Nelson captured the uneasy mood of an insecure and jittery America.

Nelson returns to this format with The Gabriels: Election Year in the Life of One Family, three works compressing his perspective in one political cycle from the primaries to election night. The first play in the trio, Hungry takes place on March 4 (also opening night). The larger event is the battle for Presidency—it’s the Friday after Super Tuesday—but the Gabriels are more concerned with a memorial for son, husband and brother Thomas, a novelist and playwright who died four months ago. In the kitchen, Thomas’s third wife Mary (a moving Maryann Plunkett) is suppressing her grief and rage as she prepares his favorite meal for the family and copes with the needy Karin (deceptively quiet Meg Gibson), Thomas’s first wife. (“There’s another wife in between, we both hate her,” Mary explains.) There’s also Thomas’s brother George (brilliantly simmering Jay O. Sanders) and sister Joyce (sarcastic Amy Warren), both struggling economically in low-paying jobs as is Hannah (warm Lynn Hawley), George’s wife. They are all concerned about the elderly mother Patricia (Roberta Maxwell in a sharp cameo) who is slowly losing her strength and memory.

As they discuss family difficulties, their disillusion with both political parties, and the loss of grace and elegance as exemplified by the dumbing-down of the nearby national park at the home of Franklin and Eleanor Roosevelt, the Gabriels become a microcosm of our unsettled society. Nelson’s writing and his direction is almost invisible. It feels as if we are listening in on private confabs, an effect enhanced by the intimate set by Susan HIlferty and Jason Ardizzone-West.

The gestures are small and concise. The tone of conversation is quiet. But there are reams of subtext in those hushed tones and half-completed movements. I look forward to joining the Gabriels again for the next play, set to open in September, and listening in on our national conversation.