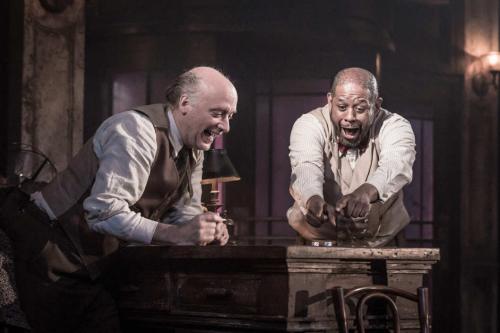 “Jesus, what a dead dump,” moans a melancholy Forest Whitaker as Erie Smith, the down-on-his-luck gambler assessing the seedy hotel he calls home in the revival of Eugene O’Neill’s 1942 one-act Hughie. Unfortunately Erie could be describing Michael Grandage’s lifeless production as well as Christopher Oram’s appropriately funereal set. Whitaker, an insightful and moving actor on screen in such films as The Crying Game, Bird, and The Last King of Scotland, is vague and removed, mistakenly playing a tentative character tentatively. He speaks haltingly, frequently pausing in odd places as if searching for the next line. There were reports of his being unsteady in delivery during previews and lurking by an onstage water cooler behind which a stage manager would feed him dialogue.

The star appears to have somewhat overcome the memorization problem, but he still hasn’t solidified a through line for his role. The brief play consists of a run-on monologue with Erie lamenting the unexpected death of the hotel’s night clerk, the titular Hughie who served as a combination lucky charm and sounding board. With Hughie gone, Erie has lost his confidence, hasn’t had a big win in weeks and is on the run from thugs out to collect his overdue losses. The only other character is the new desk jockey, an amiable cipher who occasionally responds to Erie’s ramblings and gradually takes his predecessor’s place as mascot. Like the pipe-dreaming drunks in O’Neill’s four-hour epic Iceman Cometh, Erie dissolves into despair when faced with the bleakness of his existence. Stripped of romantic delusions of money and Broadway glamour, he fears climbing the stairs to his empty hotel room. He recovers the false joy of living when the clerk takes on the role of a “sap” to listen to his daydreams of winning big stakes at racetracks and crap games.

It’s a potentially powerful short play, but Whitaker is so shaky and insubstantial that Erie’s desperate situation seems no more important than a toothache. The marvelous character actor Frank Wood manfully tries to bring life to the clerk but even his one flash of emotion expressing a desire to burn down the city, is weirdly muted. Grandage attempts to fill the gap by inserting dramatic shifts in Neil Austin’s noirish lighting and Adam Cork’s purple original music during pauses in the action. It’s like switching channels between a Humphrey Bogart flick on TCM and a live feed from the security camera in a fleabag hotel. If you need the lighting designer and the composer to supply the tension, your show is in serious trouble.

O’Neill wrote the piece as part of an unfinished series of playlets called “By Way of Obit,” focusing on characters dealing with the demise of close ones. It was not produced until after his death with a Swedish production. Subsequent stagings have starred Jason Robards, Al Pacino, Ben Gazzara, and Brian Dennehy. The latter two wisely paired it with a second short play. Running barely more than an hour, Hughie makes for less than a full evening of theater, particularly with this limp staging and especially not at steep Broadway prices. 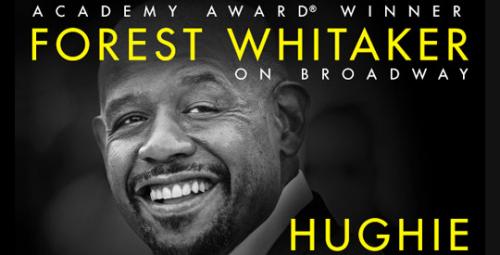