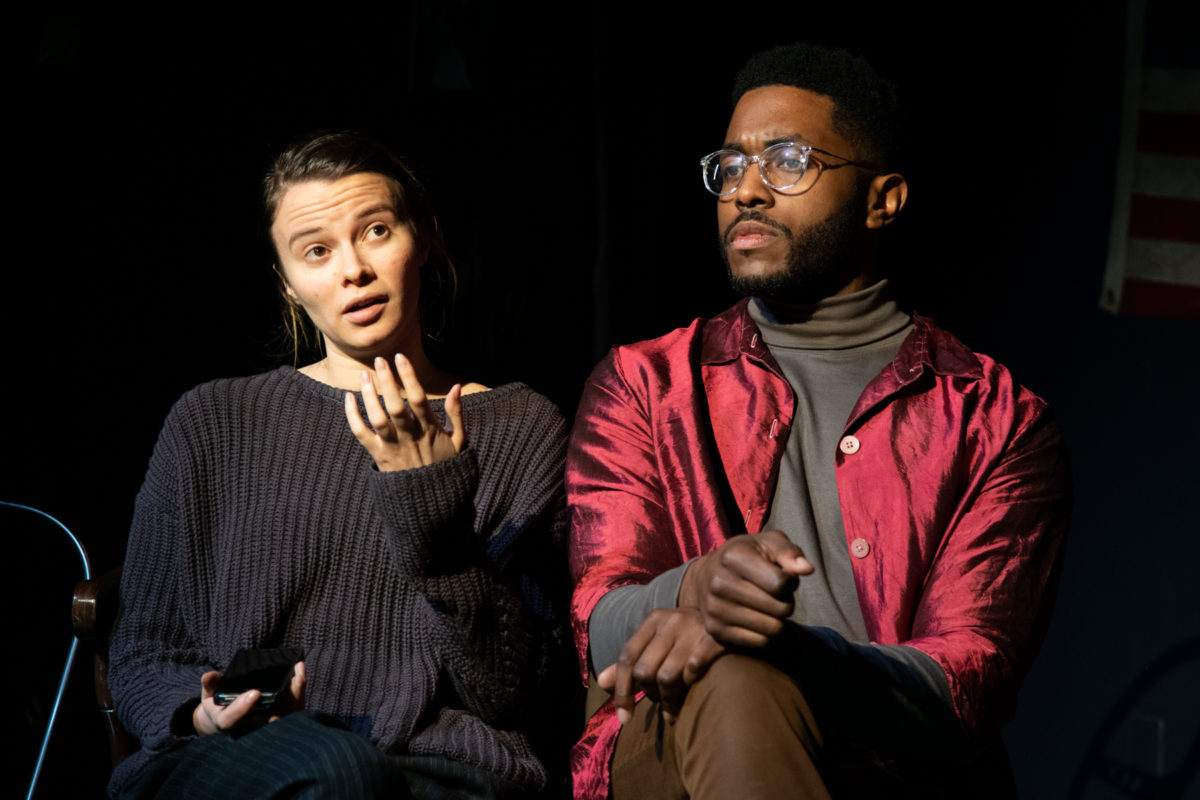 The ambitious challenger is actress-playwright Talene Monahon (Apologia), whose How to Load a Musket, presented by the Less Than Rent Theatre, takes the subject on in docudrama fashion. It’s stronger, I’m afraid, on the doc than on the drama.

Almost entirely edited from recorded interviews, it presents multiple people who get their kicks from taking part in large-scale re-enactments of Civil and Revolutionary War battles, like the Battle of Gettysburg or the Battle of the Hook. Enthusiasts like these spend bundles of U.S. currency for authentic costumes, guns, and accessories to relive such historical conflicts.

With its straight-from-the-shooters’ mouths methodology, How to Load a Musket thus provides a thorough look at the practice of historical re-enactments from the participants’ point of view. Monahon notes that she strove for a “neutral empathetic” approach in her interviews, suggesting she simply let her subjects express themselves without debate, an approach of whose validity she eventually seems uncertain.

Monahon’s play introduces 17 such persons, acted by seven actors. Aside from Adam Chanler-Berat, who covers four, each of the others (Ryan Spahn, Andy Taylor, Lucy Taylor, Richard Topol, Nicole Villamil, and David J. Cork) does two. An eighth, Carolyn Braver, who appears only in the final scene, plays one, Monahon herself, designated as TM.

Lawrence E. Moten III’s simply furnished, nondescript set, in 59E59’s tiny black box, Theater C, crowds 50 or so people around two sides of a space on whose two walls hang various period mementos and authentic costume pieces. These will be removed so they can be worn, but several actors remain mainly in contemporary clothing (Olivia Vaughn Hern is the designer), with the incorporation of things like soldier’s caps. Because the script is woven together from independent interviews, what we hear is almost entirely delivered as direct address, with the speakers telling their stories to us, as they were told, verbatim, to Monahan.

The few scenes involving dialogue focus on Jeffrey (Topol) and his mother, Jane (Villamil), whose specialty is playing George and Martha Washington, and between Dread (Cork), an African-American man, and TM, interviewing him on a New York subway train.

This general lack of interplay makes the many speeches, even when kept brief and interwoven with others, and supplemented with movement by director Jaki Bradley, more like those of a traditional talking-heads documentary than the dialogue of a conventional play. Except in a few instances, it also makes it difficult to know who we’re listening to at any one time, or to see them as three-dimensional people rather than talking points, interesting as they may be.

Despite the tedium this style occasionally creates, it doesn’t necessarily mean the content of the well-acted play isn’t absorbing. It can, indeed, be not only fascinating but provocative. As the re-enactors recite their experiences, we learn much of the nitty gritty of what’s involved in spending so much time pursuing these activities. But we also become sensitive to the political questions these events stir up.

Moreover, the speakers are all colorful enough to hold our interest and the play’s entertainment value is enhanced by both musical interpolations and theatricalized moments when lights (by Stacey Derosier) and sound (by Jim Petty) combine to hint at the excitement of re-enacted combat.

On a purely informational level, we learn, among other things, about the hobbyists’ expenses; the rationales behind their investments in time and money; their pride, ego, patriotism, and obsessiveness; what kind of people are attracted to the hobby; how re-enacting relates to theatrical acting; the range (from idolatrous to cynical) of public responses to these events; and how much knowledge, research, planning, and preparation is required.

We also hear of the fun and dangers encountered; the huge numbers of those involved; their respect for military discipline; how these temporary soldiers know who will die, be wounded, or survive; how people are cast across regional or national lines (Americans as Brits, Southerners as Northerners, etc.); and the nature of political rifts among the combatants. Even the play’s title reflects an actual lesson, as in:

And you make sure that your weapon’s half-cocked
And what do I mean by that?
Half-cock is when you can load and so forth
Full cock is when you’re ready to fire

Given that these folks are locked and loaded with historical knowledge, you’ll also get sizable chunks of historical information. Among the didactic takeaways, for example, is how black soldiers fit into those long-ago conflicts, or occasional facts, such as Abe Lincoln’s white-supremacist leanings.

As in Row after Row,much is made of the relative authenticity and fudging that goes on, each stratum of historical accuracy getting its own terminology. For instance, the lowest is “farbie,” here said to mean “far be it from authentic,” while “hardcore” re-enactors go so far as to eat rancid bacon and hardtack. At the same time, no one questions the presence of women playing male soldiers.

Monahon has constructed the material to morph from a focus on the lives and experiences of the re-enactors to an increasing preoccupation with its political implications, implications that—mainly in the case of the Civil War events—have increased exponentially in recent years, not least because of the 2016 election.

The legacy of slavery and racial animosities looms large, as does the issue of contemporary attitudes toward the preservation of Confederate symbols, like the flag and public statuary. We even hear a Southerner argue that the movement to eliminate such symbols is an act of genocide.

What was once a benign practice by fans of American history’s most famous homeland battles has become, like so much else in our nation today, a victim of a polarized population. So much so, in fact, that these historical re-enactments have become fearful of acts of terrorism by hate-spewing citizens.

How to Load a Musket may not be a conventional, or even a very good play, but it’s unlikely it will send you away half-cocked.