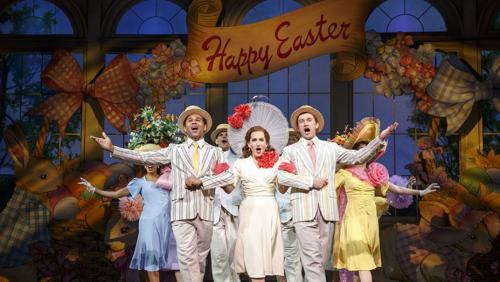 This new edition is pleasant enough, featuring a treasure trove of Irving Berlin tunes both from the original film (including the evergreen “White Christmas,” “Be Careful, It’s My Heart,” and the title song) and other sources (such as “It’s a Lovely Day Today” from Call Me Madame, “Heat Wave” from As Thousands Cheer, “Let’s Talk an Old Fashioned Walk from Miss Liberty, and “Cheek to Cheek” from Top Hat). All are delivered with charm by a smiling ensemble and directed with precision by Gordon Greenberg. But everyone is such a darned nice gal or fella, there’s no tension or sizzle. It’s like attending a long office Christmas party with an absence of gossip or backbiting.

The book by Greenberg and Chad Hodge retains the basic plotline of the movie. Song-and-dance pals Jim Hardy (Crosby) and Ted Hanover (Astaire) split over the female third of their act Lila Dixon. Jim longs to retire from the show-biz rat race and settle down on a Connecticut farm with Lila. Ted wants to keep chasing the big dream of Hollywood stardom and takes Lila with him. Unable to make a go of it financially, Jim converts his farmhouse into a nightclub open only on the holidays and Ted, ditched by Lila, makes the moves on Jim’s new romantic interest, Linda. The screenplay was basically an excuse for Crosby to croon and Astaire to hoof, but there was a friction between the two leads giving the slender story a snappy edge. Astaire’s Ted and Virginia Dale’s Lila were career-driven schemers pitted against Crosby’s soft-hearted Jim and Marjorie Reynolds’ ingenue Linda.

In the new version, all four leads are too goody-goody to be believed. Don’t get me wrong. Bryce Pinkham (Jim), Corbin Bleu (Ted), Lora Lee Gayer (Linda) and Megan Sikora (Lila) are fabulous musical performers—Bleu is a particularly exciting dancer. But  they have all been directed and written with no darkness to contrast the constant cheerful light. In addition, Greenberg and Hodge have thrown in a trio of cloyingly cute supporting characters—Megan Lawrence’s syrupy handywoman/housekeeper, Lee Wilkof’s lovable manager, and Morgan Gao’s smart-alecky messenger boy.

There are mildly enjoyable musical consolations, but the numbers don’t really take off until late in the first act with choreographer Denis Jones’ dazzlingly clever “Shaking the Blues Away” wherein the chorus goes crazy jumping rope with Christmas garlands. I also got a kick out of Alejo Vietti’s campy costumes. This tame Holiday eggnog could use a lot more spiking like that.

While the cheerful revelers of Holiday Inn are too nice, Gil Faizon and George St. Geegland of Oh Hello on Broadway are refreshingly crotchety. For those unfamiliar with these cantankerous oldsters—and I was among this number before seeing the show—Gil and George are bizarre creations of 30-something comics Nick Kroll and John Mulaney. Seen on Kroll’s Comedy Central series, in comedy clubs, and Off-Broadway last season, the pair of kvetching bachelors here holds forth on a variety of topics from theatrical cliches to dating raccoons to their blighted careers on the fringes of show biz. Gil is a “Tony Award viewing actor” and George is an unpublished writer whose magnum opus is a massive novel called Next Stop, Ronkonkoma (“a train ride told from 1,000 difference perspectives.”) 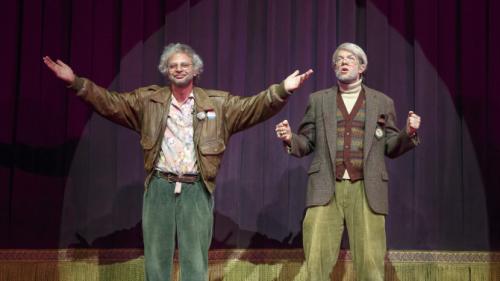 The structure of their two-man show is loosey-goosey. After some hilarious banter satirizing Broadway conventions, the duo perform a play-within-a-play about being evicted from their shared, rent-controlled Upper West Side apartment and reaching the heights of cable-access fame with their talk show Too Much Tuna. Guests are asked a series of non-sequitur questions, confronted with a towering fish sandwich, and requested to utter the titular catch phrase. The latter device allows for a different nightly visit from a celebrity. At the performance attended, the guest was Aubrey Plaza of Parks and Recreations who gamely went along with the stars’ improvisational madness.

Director Alex Timbers keeps the daffy duo on a relaxed leash, allowing them to romp and jump but not run out of control. Scott Pask’s set design is a riotous mash-up of left-over scenic elements. Like the show itself, it’s a weird, witty collage of cultural references and skewed observations. Anyone with a tasty for tangy humor should say Oh Hello, if you don’t mind too much sugar, check into Holiday Inn.