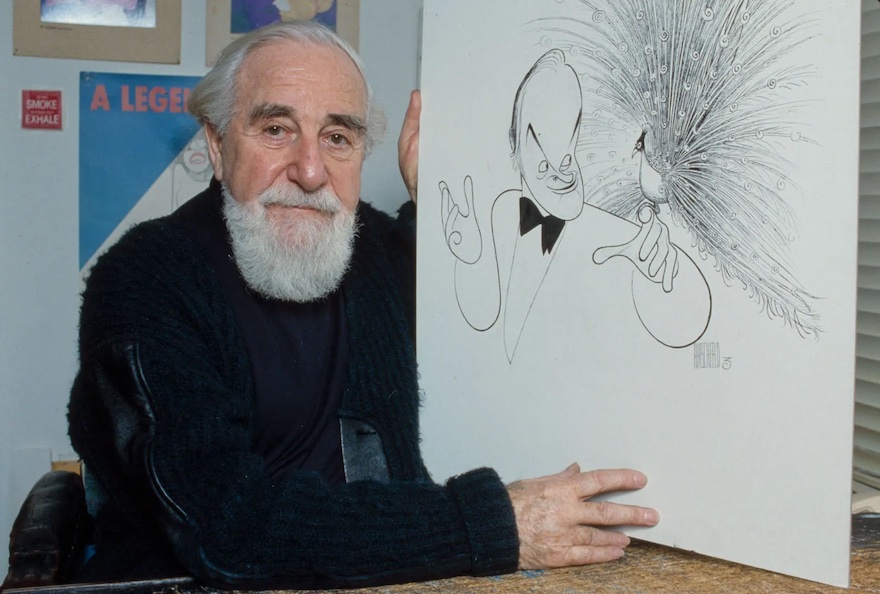 December 5, 2022: David Leopold first met Al Hirschfeld when he was 24 and Hirschfeld was 86. “But he treated me as an equal,” Leopold remembers. Over the years their friendship and professional relationship grew. And now Leopold is the Creative Director for the Al Hirschfeld Foundation, a nonprofit that promotes the theater and visual arts by supporting museums, libraries and theaters through grants and exhibitions of Hirschfeld’s art.

Leopold is also the editor of the Foundation’s new book, The American Theatre As Seen By Hirschfeld, 1962-2002. This simply gorgeous and lavishly illustrated volume features nearly 300 drawings, many of which were chosen by Hirschfeld himself before his death in 2003 at the age of 99. The drawings of each decade are prefaced by an essay written by one of Hirschfeld’s contemporaries. Thus, we read Brooks Atkinson describing Hirschfeld at 60: “ardent, chunky… with a scraggly gray beard and alert eyes.” Or Maureen Dowd’s impression of Hirschfeld at 77: “a benign leprechaun, with a long silver beard and twinkling brown eyes.”

An inaugural exhibition at the new Museum of Broadway, curated by Leopold, takes visitors through nine decades of Hirschfeld’s iconic images of theater. It features twenty-five drawings and prints from 1928 to 2002. Visitors will also be able to view Hirschfeld’s sketchbooks and portraits of theater luminaries such as Julie Andrews, Stephen Sondheim and Liza Minnelli, as well as two walls of posters, programs and album covers.

Hirschfeld famously created all his work while seated in an old white porcelain and red leather barber’s chair that could go up, down, swivel and lie flat (for a much-needed nap). A replica will allow visitors to picture the artist at work. And for us unfortunate souls who were never captured by Hirschfeld’s pen, a new app created exclusively for this exhibition will give visitors the chance to create a Hirschfeld portrait of themselves, using a palette of hair, eyes, ears, nose and mouth.

Leopold, who first got hooked on Hirschfeld as a young boy in central Pennsylvania when his parents taught him to search for the hidden “Nina,” possesses a wealth of information on Hirschfeld he will enthusiastically share.

“Hirschfeld was living in Paris when he first started drawing for movies to make extra money… On a trip to New York he met his friend, press agent Richard Maney, who suggested they see Sacha Guitry in the comedy Mozart… Hirschfeld doodled a likeness of Guitry and Maney said, ‘put it on a clean sheet and I’ll get a paper to print it.’” On Dec. 26, 1926, the illustration ran across six columns in the New York Herald Tribune.”

According to Leopold, until 1943, when Hirschfeld began working exclusively for The New York Times, his work appeared regularly in many papers, including The Brooklyn Eagle. His relationship with that paper came to an end in 1939, when Hirschfeld, who sided with the workers during a strike, drew an illustration of the publisher as a turkey. The strike was settled, but only on condition that Hirschfeld not be re-employed at the paper.

What made Hirschfeld so special? Leopold believes it was his “wide-eyed wonder at almost everything.”

“Hirschfeld liked people,” Leopold says. “He was interested in capturing characters. He exaggerated for emphasis, not to denigrate. He didn’t believe he was a caricaturist. He called himself a characterist.”

Hirschfeld taught himself to draw in the dark, while looking at the stage. And those sweeping lines are really a lot of little scratches. The result, says Leopold, is “simple and sophisticated.”

His drawings appeared in the Sunday papers before the shows opened, so he didn’t know if they would be successful. Nor did the many people who knew what was going on in theater because of his drawings, people who might never get the opportunity to see the show.

Hirschfeld knew everyone and everyone seemed to have a Hirschfeld story. “He was a beloved figure,” says Leopold “Everyone remembers his kindness and warmth. He didn’t like to talk about himself. His drawing spoke for him.” His drawings are timeless. “They never seem to happen in the past,” adds Leopold.

Leopold believes there are many theater artists today doing good work. But he also knows “There was no Hirschfeld before him, and there will be no Hirschfeld after him.”

Available exclusively online and at The Museum of Broadway starting November 15, The American Theatre as seen by Hirschfeld 1962-2002/

The American Theatre as Seen by Hirschfeld will be on display November 15, 2022 to March 15, 2023 Tickets for The Museum of Broadway can be purchased www.TheMuseumOfBroadway.com/Tickets. These timed tickets start at $39, and a portion of every ticket sold will be donated to Broadway Cares/Equity Fights AIDS.

Click to Read More on Hirshfeld Book on Theaterlife.com