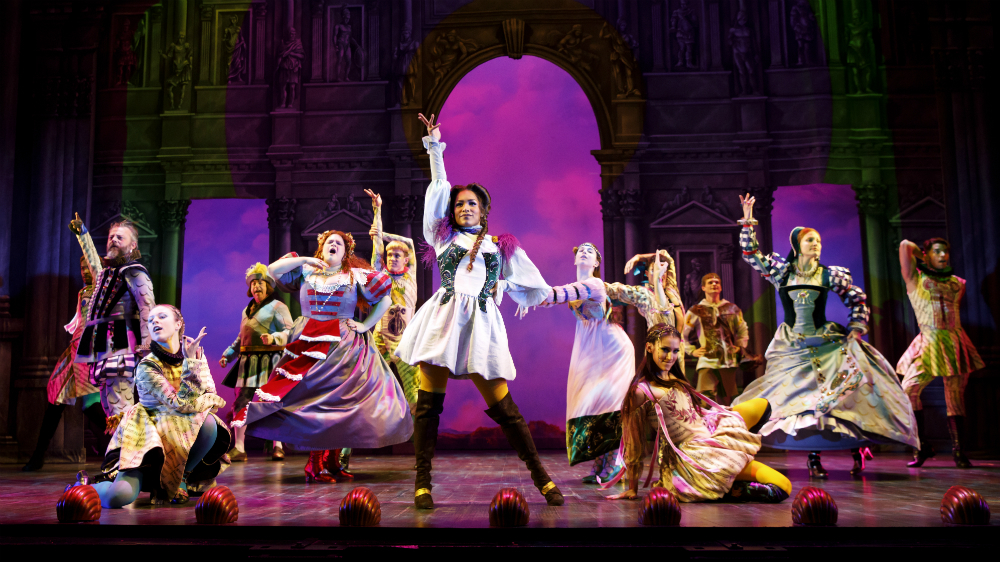 Head Over Heels could have been just another jukebox musical, but the clever book originally by Jeff Whitty and rewritten by James Magruder mixes Sir Philip Sidney’s 16th century prose work The Arcadia and with songs by the 1980s girl group The Go-Gos (along with tunes from the solo career of member Belinda Carlisle) for a surprisingly fun, silly joyride. The usual tangle of hidden loves and gender-bending disguises gets a 2018 twist with lesbian, transgender, and feminist themes interwoven.

The mythical kingdom of Arcadia, a weird collage of ancient Greek, Elizabethan and 1980s sensibilities (Julian Crouch designed the charming storybook sets), lives by the beat, a harmonious life rhythm and also a good excuse for the cast to open the show with “We Got the Beat,” the Go-Gos’ biggest hit, and dance Spencer Liff’s infectious choreography. The revelry is interrupted by a dire prophecy of doom delivered by Pythio, a sexually binary figure played by Drag Race contestant Peppermint. Chauvinist king Basilius (sturdy Jeremy Kushnier) leads his court into the woods to avoid the deadly predictions, much to the objections of his strong-minded queen Gynecia (diva-fierce Rachel York).

The Central Park Twelfth Night gives off similar vibes of inspired nuttiness and celebratory sexual ambiguity. The Bard’s perennially popular tale of separated boy and girl twins has previously been musicalized with the hit Your Own Thing and the flops Love and Let Love, Music Is, Play On!, and All Shook Up. This latest updating is as much fun as Heels and obliterates any memory of predecessors.

Like Heels’ Arcadia, Twelfth Night’s Illyria is an imaginary realm where identities blur and overlap. Director Kwame Kwei-Armah envisioned the setting as a gigantic block party with participation from local community groups when this production was done as a limited Public Works staging in 2016. Public Theater artistic director Oskar Eustis takes up the reigns for this renewed staging while Kwei-Armah fulfills his new position as artistic director of the New Vic in London.

The Delacorte stage literally overflows with people as Tony winners Nikki M. James and Shuler Hensley and other Broadway and Off-Broadway vets mix with nonprofessionals in a riotous configuration expertly controlled by Eustis with hip choreography by Lorin Latarro. In addition to the solid James and Hensley, Ato Blankson-Wood, Nanya-Akuki Goodrich, Daniel Hall, Andrew Kober, and Lori Brown-Niang prove capable clowns. Shaina Taub leads the orchestra with aplomb, plays the fool Feste with zip, and wrote the splendid songs which explore themes of gender switching and perspective. This infectious and fizzy spectacle rushes by in 90 minutes, a delicious summer cooler. What a pity it will gone soon. But that makes it all the more special. If the Public Theater attempts to transfer it to a commercial run they would have to scale back the size and trim its bubbling excess. It wouldn’t be the same indoors or smaller.

The National Yiddish Theatre Folksbiene production of Fiddler on the Roof performs a reverse operation—reducing the scale of a huge Broadway smash to a more intimate experience in the small auditorium at the Museum of Jewish Heritage. The result is not a diminishment. The production staged with love and professionalism by the Oscar-Tony-winning actor Joel Grey creates a sense of a community telling the story of a small village in Tsarist Russia rather than a series of star turns and showstoppers. The Yiddish-language adaptation by Shraga Friedman from the 1965 Israeli premiere further adds to the spirit of the setting since this is the language Sholom Aleichem’s characters would have spoken. (English and Russian translations are provided on screens on either side of the stage.) Grey’s staging and Stas Kmiec’s choreography convey the close connections within the village of Anatevka as its flinty inhabitants scrape out a living in the shadow of an oppressive anti-Semitic government. The horrors of the pogroms become frighteningly real as Beowulf Borritt’s simple set and a banner with Hebrew writing are ripped apart.

Steven Skybell leads the company as Tevye the long-suffering milkman with five daughters, a nagging wife, and a close relationship with God. Skybell, a New York theatre veteran with numerous Broadway and Off-Broadway credits, conveys the full range of Tevye’s reactions to the eroding of his beloved Old World traditions as they give way to 20th century shifts. Here is a father wrestling with challenges to his authority and love for his children instead of a comic delivering a big number or going for the laugh lines. Jennifer Babiak captures the rough edge of Tevye’s spouse Golde as well as her hidden tenderness. Each member of the company becomes a full-fleshed citizen of Anavetka from Jackie Hoffman’s kvetching matchmaker to every beggar, butcher, and ghost.

The same cannot be said for This Ain’t No Disco, a new musical from Atlantic Theater Company with major-name involvement, but minor impact. The self-described “rock opera” also attempts to depict a community—that of the late ’70s-’80s NYC club scene—but produces only stereotypes and derivative songs. This is a surprise since the score is by Stephen Trask and Peter Yankowitz who worked on Hedwig and the Angry Inch (Trask as composer and Yankowitz as the original drummer), the book is by Trask, Yankowitz and Rick Elice (co-author of Jersey Boys), and direction by Tony winner Darko Tresnjak (A Gentleman’s Guide to Love and Murder).

There are individual moments of excitement provided by Samantha Marie Ware as a troubled recording star, Chilina Kennedy as a smarmy publicist-turned-TV-personality and Will Connolly as an Andy Warhol clone. But the storyline is overly familiar with goodhearted Sammy (Ware) and Chad (sweet Peter Laprade) caught up in the phony milieu of Studio 54 and the Mudd Club. Instead of insightful commentary and portraiture of a bizarre and intoxicating era, we get warmed-over tropes of innocence corrupted accompanied by pedestrian tunes and lyrics, traffic-cop direction by Tresnjak, aerobic-class choreography by Camille A. Brown, and outrageous mugging by Theo Stockman as Steve Rubell, the real-life owner Studio 54.

You’ll have a joyful night at Head Over Heels, Twelfth Night, or Fiddler, but This Ain’t No Disco ain’t worth your time.