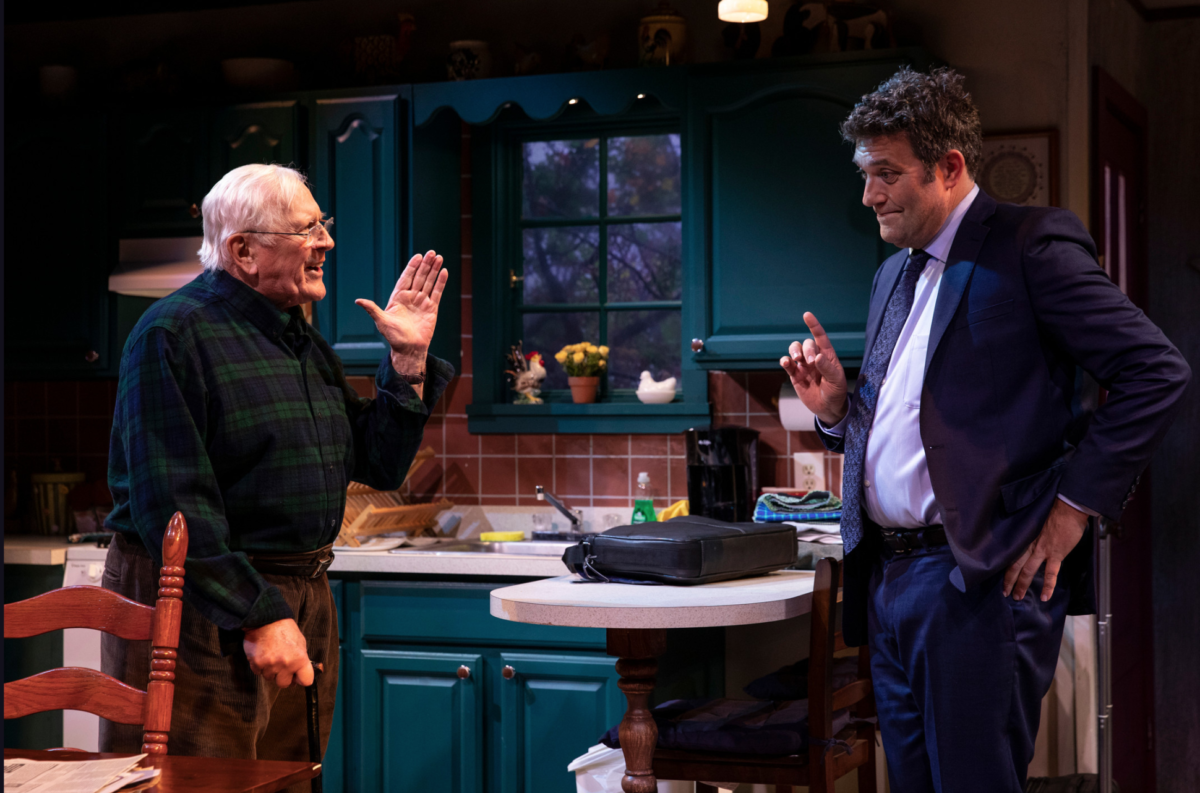 On a different note, a totally square and uplifting two-hander, Harry Townsend’s Last Stand at The Manhattan Theatre Club Stage II, makes for a charming relief from a tragic world. Written by George Eastman whose works have been produced primarily in regional theater, it’s as deft and loving a piece as one can find.

And it is something of a coup for Len Cariou, the titular Harry. No stranger to playing characters who are spinning out of control – he won the Tony Award for his portrayal of the cannibal butcher of Fleet Street, Sweeney Todd – Cariou carries off this sweet romantic tale with extraordinary finesse. And Harry isn’t easy, or laid back, or fair. He is 85 years old, and at best a bitter sweet kind of guy.

Just moments after his son who has not seen in years arrives, he’s on him. “How come you’re wearing a suit? You’re in Vermont, Son; you look like a stuffed shirt.”

Alan, in a dutifully underplayed performance by Craig Berko is on a mission to protect his old man in his old age. Harry, as we quickly discover is no longer capable of living alone, a predicament confounded by the fact that he is in total denial of his failing health, and his loss of memory.

Instead Cariou’s Harry rails against the dyeing of the light as selfishly as King Lear, behaves as contemptuously as Coriolanus and as manipulatively as Iago – all roles the Shakespearean actor is has played with great aplomb.

Talking to us like the guy next door, Harry is an ordinary man. His only want is to stay in the home where he raised his family, where his memories of his wife are alive, and where he feels safe.

As designed by Lauren Helpern, the Vermont chalet where Harry has retired is something of a museum to family history. An ancient pair of skies, a Shaker table that carries the marks and scratches of 3-plus decades of family life, and beyond the proscenium arch we imagine a lake where they had loved to swim. More recent acquisitions include the clutter of dishes, food and laundry which Harry can no longer manage.

For his son, the ageing country home where they spent their summers looks sad and faded. In spite of his good intentions, he turns into a storm of negativity and sarcasm when faced with his father’s blind intransigence. Even his best efforts to amuse the old man sound a bit cross, “You poke and jab around like a boxer until you find an opening to distract me,” he remarks. About his mother, he tells Harry, she “married loud and lascivious.”

The two actors have a wonderful rapport and great comic timing. As a story of father and son bonding, it doesn’t get much better or more loving or more deliciously sentimental than this. Even though very little happens in the course of these three acts, director Karen Carpenter builds the two-hander around the energy and commitment of these two engaging, charismatic actors.