April 17, 2022: Harmony, the long-gestating musical about the Comedian Harmonists, a real-life German singing group destroyed by the Nazis, isn’t exactly harmonious. There are several revelatory moments when Warren Carlyle’s inventive staging combines with the clever, moving score by pop icon Barry Manilow and Bruce Sussman to create new reactions to the oft-told tale of genocidal horror. But there are also some overbaked melodramatic turns. Fortunately, the startling and innovative outweighs the cliched in this tuneful and harrowing musical. 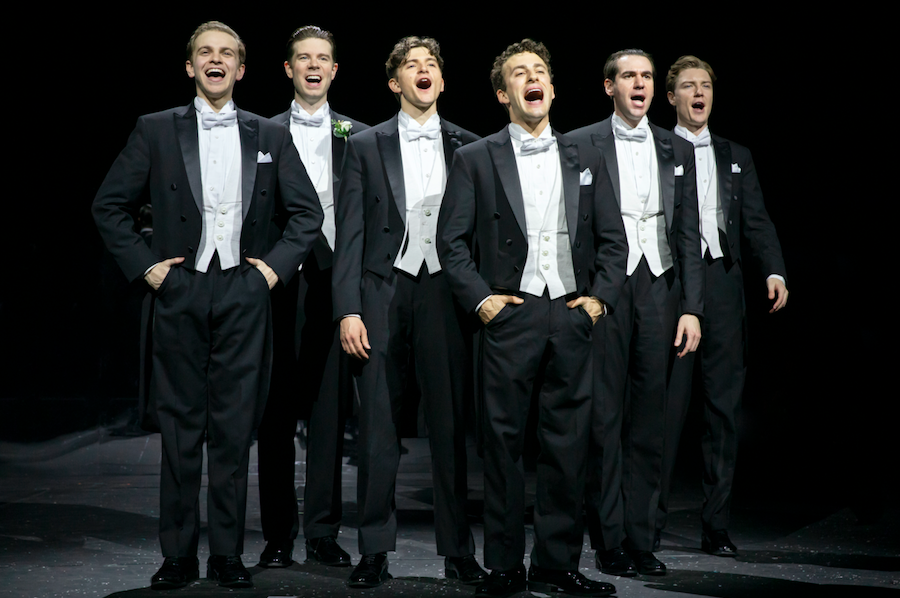 April 17, 2022: Harmony, the long-gestating musical about the Comedian Harmonists, a real-life German singing group destroyed by the Nazis, isn’t exactly harmonious. There are several revelatory moments when Warren Carlyle’s inventive staging combines with the clever, moving score by pop icon Barry Manilow and Bruce Sussman to create new reactions to the oft-told tale of genocidal horror. But there are also some overbaked melodramatic turns. Fortunately, the startling and innovative outweighs the cliched in this tuneful and harrowing musical.

The show has been around for quite a while, having premiered at the La Jolla Playhouse in 1997 and had productions in Atlanta and Los Angeles. The subject matter was also dramatized in a play with music by Susan Feldman called Band in Berlin which played Broadway in 1999. The current Off-Broadway production is from the National Yiddish Theater Folksbiene and plays in the Museum of Jewish Heritage where the Yiddish-language Fiddler on the Roof began life. The story is rife with possibilities. The Comedian Harmonists were a six-member troupe with diverse European backgrounds, specializing in imitating instruments, complex arrangements and satiric specialty numbers who shot to fame in the late 1920s to the early ’30s. They played Carnegie Hall and almost appeared in the Ziegfeld Follies, but opted to stay in Germany. After Hitler rose to power, the Nazi Ministry of Culture split up the group because three of its members were Jewish. Their films and records were destroyed, the Harmonists were scattered to the winds, some to perish, some to wander and ultimately survive to tell their tale.

The lone survivor into the 21st century, nicknamed Rabbi because of his previous religious position, serves as narrator in Sussman’s uneven book. Played with passion by Chip Zien, the older Rabbi leads us through the group’s tragic story, often assuming the persona of celebrities who figure in the history, including Albert Einstein, Richard Strauss, and, in comic drag turn, Marlene Dietrich. The libretto in the first act is sluggish and slow, enlivening only by director-choreographer Carlyle’s zippy staging and the rapturous specialty numbers arranged by Manilow and John O’Neill. The character songs feature lush haunting melodies by Manilow and some smart lyrics by Sussman. But the second act picks up incredibly, taking us into the kind of disturbing Brechtian milieu that distinguished Harold Prince’s original staging of Cabaret, Bob Fosse’s film version and the acclaimed revival by Sam Mendes and Rob Marshall.

After the intermission, the group has tragically chosen to return to Europe rather than remain in the US following a successful tour, thinking the Third Reich will soon “blow over.” The second act opens with “We’re Goin’ Loco!,” a wildly entertaining camp hoot starring the Parisian bombshell Josephine Baker (an irresistible Ana Hoffman) with the Harmonists playing bongo drums held by the chorus boys. It’s a funny pastiche of Baker’s notorious banana dance with a wink to Carmen Miranda’s movie madness. Suddenly in the midst of all this gaiety, a gangplank descends and a ship’s whistle blows, signaling the return to the Deutschland and certain doom. Musical hijinks clash with stark reality into a stunning coup de theatre. In another devastating piece of stagecraft, the group attaches long red elastic bands to their arms and become puppets extolling the joys of the fatherland under the Fuhrer. Ironically, at the performance attended, one of the long red bands remained dangling from the flies like a noose and a reminder of the group’s ultimate tragedy.

The second half has its share of excessive melodrama such as a scene on a train when Hitler himself crosses paths with the Harmonists and the young Rabbi contemplates grabbing a pistol and assassinating the dictator. The program notes state this meeting actually occurred, but it’s staged like a Tom Cruise action film. Then the elder Rabbi launches into an overlong musical scream of regret for his inaction. Much more effective and more movingly delivered by Zien is a later spoken monologue where the narrator simply and directly details the final fate of each of his colleagues and their families.

Despite the missteps, Harmony is ultimately effective in conveying the colossal waste of talent and the monstrous injustice suffered by the characters and the whole of Europe and the world itself. The Harmonists are given dramatic and musical life by the amazing Danny Kornfeld, Sean Bell, Zal Owen, Steven Telsey, Blake Roman, and Eric Peters. Sierra Boggess and Jessie Davidson are respectively tenderly empathic and boldly conflicted as the wives of two of the members.

Carlyle’s staging and dance direction flow seamlessly, complemented by the flexible set by Beowulf Boritt, the sensitive lighting by Jules Fisher and Peggy Eisenhauer, and the context-creating projections and videos by batwin + robin productions. Though it has its flaws, Harmony is a strangely beautiful and sad production. Thanks to that and Manilow’s star power, it might transfer to Broadway.