March 12, 2022: Despite the fact that I was born and raised Jewish and have heard more stories of the Holocaust than I can remember, I knew nothing about the Comedian Harmonists until I saw Harmony, a not-so-new but wonderful musical The National Yiddish Theatre Folksbiene is presenting at Museum of Jewish Heritage — A Living Memorial to the Holocaust. 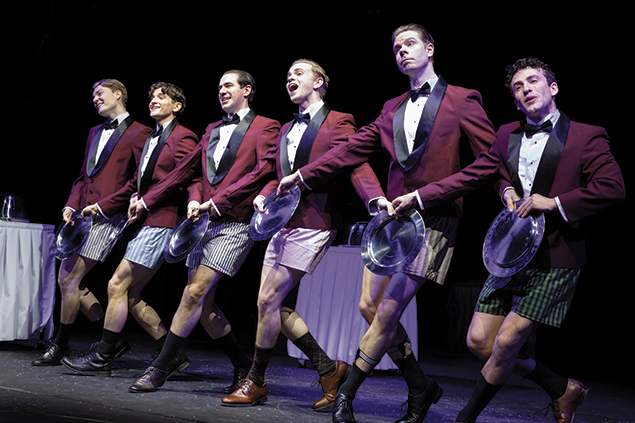 March 12, 2022: Despite the fact that I was born and raised Jewish and have heard more stories of the Holocaust than I can remember, I knew nothing about the Comedian Harmonists until I saw Harmony, a not-so-new but wonderful musical The National Yiddish Theatre Folksbiene is presenting at Museum of Jewish Heritage — A Living Memorial to the Holocaust.

The Comedian Harmonists were an all-male German singing ensemble that specialized in close harmonies. The group performed between the wars to international audiences. But problems arose after Hitler took over Germany because three of the group’s members were Jewish and one was married to a Jew. In 1935, the Nazis finally prohibited them from performing, after making their professional lives progressively more difficult.

Harmony, with music by Barry Manilow and book and lyrics by Bruce Sussman, premiered at the La Jolla Playhouse in 1997 and was presented at the Alliance Theater in Atlanta in 2013 before it moved to the Ahmanson Theater in Los Angeles. Now, the musical is thriving right here in NYC under the direction of Warren Carlyle.

Harmony starts out with the group’s brilliant performance at Carnegie Hall in December 1933. Soon we move to the past, and with the help of narrator Chip Zien, who plays the older, last surviving member, Roman Cycowski (aka “Rabbi”) we learn how the group formed, rose to international fame and eventually disbanded.

It all began when Harry Frommermann (Zal Owen) took out a newspaper ad asking for singers. He ends up with Erwin Bootz (Blake Roman), nicknamed Chopin because of his skills at the piano, until now on display at a local brothel; Ari Leschnikoff (Steven Telsey), a Bulgarian tenor whose nickname is Lesh; Erich Collin (Eric Peters), a wealthy medical student who has all the right contacts (including Albert Einstein and Richard Strauss – all played by Zien); Bobby Biberti (Sean Bell) a bass with a biting sense of humor; and Roman Cycowski (Danny Kornfeld)), son of a cantor and former rabbinical student, who is tired of all those songs in minor keys.

All these introductions slow down the action somewhat, but the actors are so likable and their music so enjoyable most people won’t mind, even if they notice. More problematic, the book does not tell us enough about the individual characters to make us care about them as people and not just members of a terrific singing group. Happily, all this is corrected in the second act.

Now, with Germany under the racist Nazi regime, every member of the group has to make difficult decisions. Should they remain together, or should they split? Should they defy the Nazis? Should they submit? Despite the obvious risks, the group denounces Hitler and the Nazis in the satiric “Come to the Fatherland,” in which the Comedian Harmonists become human marionettes controlled by long red ribbons. One can’t help but think of songs like “If You Could See Her,” and “The Money Song” in Kander and Ebb’s Cabaret.

And how about the two wives? Mary (Sierra Boggess) is a gentile woman married to Rabbi, a Jewish man, and Ruth (Jessie Davidson) is a Jewish woman married to a gentile man. Both are in danger. But while Mary, recalling the words of Naomi in the Book of Ruth, refuses to leave Rabbi, Ruth must face the frightening and sad reality that Chopin’s fear of the Nazis is stronger than his love for her. Ruth and Mary’s “Where You Go” is a beautiful ballad that raises the stakes considerably.

Harmony is not a Broadway extravaganza. Carlyle, who also choreographs, set designer Beowulf Boritt and costume designers Linda Cho and Ricky Lurie are all, no doubt, working with fewer resources than they are used to. But the entire creative team uses what they have so well it’s hard to imagine any more elaborate details would do anything but take away from the pristine sincerity of this production.

Harmony runs through May 15 at Museum of Jewish Heritage – A Living Memorial to the Holocaust, 36 Battery Place.
Photography: Julieta Cervantes