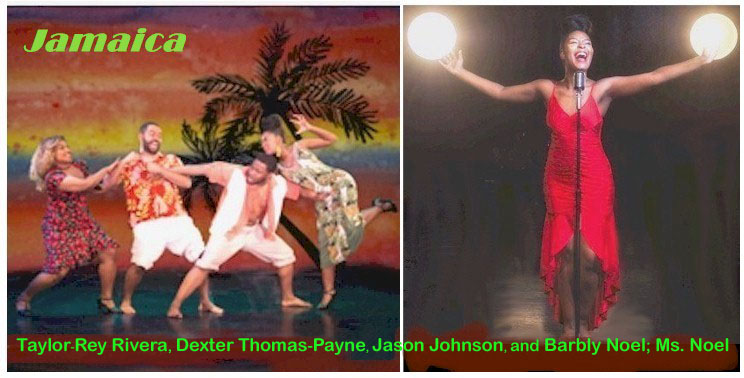 The production continues HRT’s revival of shows with Harburg lyrics. This began in 2009 with Flahooley, continued with The Wizard of Oz last year, and with Finian’s Rainbow (music by Burton Lane), and Bloomer Girl (music by Arlen) in 2018 and 2019.

Jamaica, with book by Harburg and Saidy, is set on Pigeon Island off the Jamaican coast. It tells about a small community fighting to avoid being overrun by American commercialism. A young romantic, Savannah, however, dreams of escaping to New York for a better life and where she hopes to find true love. A business man from New York proposes marriage and Savannah is ready to depart for greener pastures. When a poor fisherman, Koli, saves her brother’s life during a powerful hurricane, she opts to remain on the island, and with him.

The score of 17 tunes, many in the Calypso style, with themes ranging from everyday Jamaican life, love, and evolution to nuclear energy, includes “Pretty to Walk With,” “Push de Button,” “Incompatibility,” “Cocoanut Sweet,” “Yankee Dollar,” “What Good Does It Do?“, “Ain’t It the Truth,” “Leave the Atom Alone,” and “I Don’t Think I’ll End It all Today.”

Harburg and Saidy’s socially conscious satire Jamaica, which introduced an interracial cast in lead roles to 1957 Broadway, was co-written by Harburg when he was a victim of Senator Joseph McCarthy’s Hollywood Blacklists and communist witch hunts. Since he couldn’t find work in Hollywood, he focused his talents on Broadway.

The show’s powerful political themes (racism, classism, and capitalism) resonate today as they did in 1959 when this groundbreaking musical opened on Broadway. Production dramaturge Deena Harburg, daughter-in-law of the late lyricist [married to son Ernie], worked closely with her father-in-law. She’s the founding chair of the NYU Tisch Graduate Musical Theater Writing Program, and author of Fascinating Rhythm: The Collaboration of George and Ira Gershwin.

She notes that Harburg was famous for some not-too-subtle progressing thinking in the books, co-written by Saidy. This isn’t surprising since Harburg was known as the “social conscience of Broadway” – his anti-racist, anti-capitalist songs in Finian’s Rainbow are blatantly progressive. He was lyricist of the Depression anthem “Brother Can You Spare a Dime?”

Ms. Harburg has sanctioned the book for the HRT production and the
“fresh, new perspective” by Art Perlman, who adapted the Broadway script for the Tony-nominated 2009 revival of Finian’s Rainbow.

Grant is staging the musical “environmentally with the actors, singers, and dancers performing throughout the performance space only inches away from the audience.”

There are 18 performances of Jamaica currently set,  all
Saturday nights at 7 P.M., once a month to start and then two and three Saturdays monthly. For specific dates, visit  www.harlemrepertorytheatre.com. Tickets are $25, general admission; $50, premium seating; and $15 for students/seniors (plus $2 per ticket service charge). To purchase, call Smarttix at (212) 868-4444 or buy online at www.smarttix.com. Call (917) 697-3555 for reservations or group rates. There is secure underground parking for $10 at East 122nd Street, between Second and Third Avenues.

Visit the site for performance information and tickets for HRT’s revival of Lorraine Hansberry’s A Raisin in the Sun; and Lynn-Manuel Miranda’s In the Heights.

Arlen’s music parodies Calypso, which was very much in vogue in the 50s,
largely due to the popularity of Harry Belafonte. Jamaica was tailored to capitalize on his charisma and success as a recording artist; and the beauty and singing chops of Lena Horne, a top-selling recording artist and rising film star at M-G-M.

The musical, produced by David Merrick, had troubled pre-Broadway try-outs. During the Philadelphia run, Merrick grew to despise the script and demanded changes. Harburg and Saidy, with the mega success of Finian’s Rainbow under their belt, refused. Merrick threatened to close the show. Joseph Stein [later, the Tony-winning book writer of Fiddler on the Roof] was brought in to rewrite. In the process, Horne and husband Lenny Hayton, also Horne’s music director and manager, raised the specter of her recording success and burgeoning movie career. Suddenly the show became a showcase for her, and with an ever-growing list of demands. Just as suddenly, Belafonte feigned illness and withdrew. Film star Ricardo Montalban became the male lead.

Then, there was the matter of musical director musical chairs. Waving the baton before a 25-piece orchestra [with four musicians handpicked by Ms. Horne, who were told to follow her tempo and hers alone], was esteemed conductor and arranger Lehman Engel, who stepped aside when, as has been reported by Steve Cohen (The Cultural Critic), Arlen wanted his brother Jerry to conduct. However, Ms. Horne refused to work with him. His replacement, veteran conductor Jay Blackton, barely made it to the Boston tryout before clashing with Ms. Horne. He was fired.

Rumors ran amok in New York. To avoid disaster, Merrick cajoled Engel to reluctantly return. Easygoing Engel didn’t like Ms. Horne running rough shod over every aspect of the production, including director Robert Lewis, and couldn’t wait for a replacement to be brought it. Ms. Horne proposed Sherman Frank, and, needless to say, he got the job. [Though he endured numerous clashes with Ms. Horne and Layton, he somehow managed to stay on for a year.]

With the dust settled, Jamaica opened on Broadway October 31,1957. In addition to Montalban as Koli, the show co-starred Adelaide Hall (cast in the original Shuffle Along), Josephine Premice, Ossie Davis, and 26-year-old Alvin Ailey (lead dancer). The choreographer was Hollywood/Broadway’s brilliant Jack Cole.