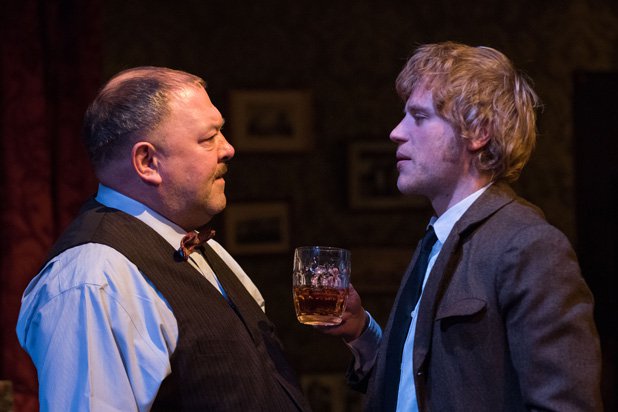 Like so many plays written by the Irish, Hangmen is set mostly in a pub, this time in the northern English town of Oldham. But it begins with an execution, not of an Irish revolutionary, but a young man (Gilles Geary) convicted of rape. This unfortunate man, resists putting his neck into the noose by refusing to let go of the bed in his cell. The hangman looks on while his blundering assistant, Syd (Reece Shearsmith), pries him loose.

The rest of the play is part mystery (was the hanged man guilty?), part suspenseful drama (will another, similar crime be committed?) and part farce (these characters are just too ridiculous to take seriously).

Now, two  years later, we find out the hangman, Harry (Mark Addy), is a pompous, self-aggrandizing pub owner who’s known as the second-best hangman in England and aspires to be the first best. The problem is England is about to abolish hanging and many of the locals are not exactly pleased. These sycophants come into the pub to voice their complaints, but even more to get into Harry’s good graces.

Along with these locals arrives Clegg (Owen Campbell), a young reporter who gets Harry to give him an ill-advised personal interview. More ominous is a suspicious character named Mooney (Johnny Flynn), who hails from London and wants to rent a room from Harry and his wife Alice (Sally Rogers).

Even more threatening, Mooney takes a special interest in Shirley (Gaby French), Harry and Alice’s chubby, awkward daughter who mopes perpetually around the pub serving the customers with nary a smile.

The many unexpected twists that embellish McDonagh’s story are better left undisclosed for the benefit of those who will hopefully go see the show. But surely this is a nail-biter that has enough macabre humor to keep most people in the audience laughing between bites.

Although the thick accents make the dialogue sometimes difficult to understand, especially at the beginning, as the play progresses the accents seems less and less of an impediment. This is partly due to the excellent writing but also thanks to the uniformly fine acting.

Addy ensures that Harry is a recognizable big fish in a small pond. Yet he is not unlikable. The play demands Harry be a good father and husband, and in some ways a lovable rogue. Mooney, on the other hand, is as despicable as he is mysterious. And as crazy as he is despicable. Is he a prankster playing on everyone’s fear or is he a murderer taking advantage of their naïveté? Flynn keeps us guessing.

Mooney certainly knows how to toy with both the shrewd Alice and her innocent daughter. And he seems to instinctively understands their complicated relationship: Rogers gives Alice a feisty sensuality that’s sure to make her morose daughter uncomfortable, and French, traipsing about the pub, takes every opportunity to show Shirley’s displeasure.

It would be easy to assume McDonagh wrote Hangmen as a protest against capital punishment if it weren’t so obvious he’s having so much fun. On the other hand, it well may be he’s having that fun by taking a jab at the kind of people who believe it’s okay for the state to take a life, even the life of a criminal.