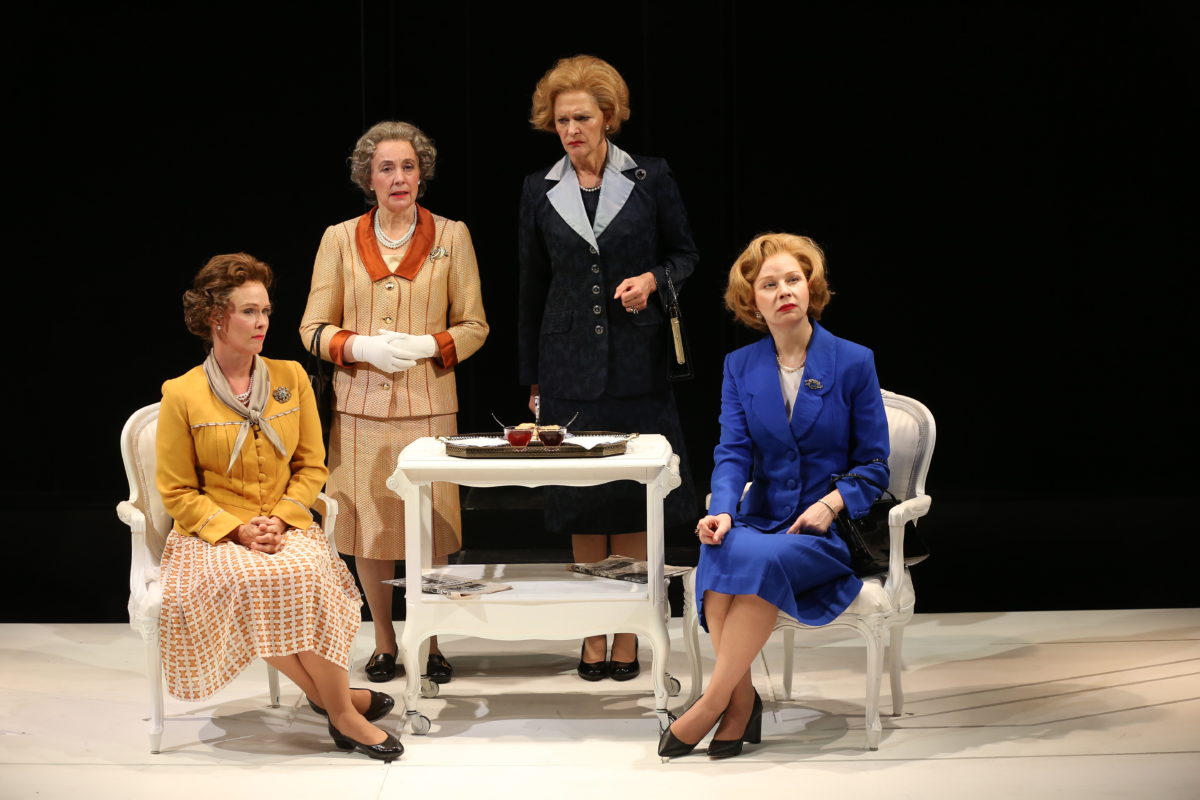 Smartly written, succinctly expressed, and satirically pointed, if referentially overstuffed, it’s a welcome addition to 59E59 Theater’s current Brits Off Broadway season. On the other hand, if you have little or no knowledge of British politics and personalities during Thatcher’s three consecutive terms, from 1979-1990, about all that will likely keep you awake is the razor-sharp direction and superb acting.

Handbagged, helmed by Indhu Rubasingham, comes to us from London’s Round House Theater, with a splendidly cast ensemble of six, four of whom play two roles. The other two, called Actor 1 (Cody Leroy Wilson) and Actor 2 (John Lescault), play eight and nine, respectively. Each of the leads is split into a younger and older version. The younger queen is Liz (Beth Hylton), the older one is Q (Anita Carey), while the younger PM is Mags (Susan Lynskey) and her older version is T (Kate Fahy).

Everyone takes full cognizance of the audience’s presence, speaking many of the lines directly to it. Actors 1 and 2 go so far as to discuss their jobs, including which roles each is playing, even suggesting a friendly rivalry for the juicier ones.

Handbagged is a chronicle of the major political issues roiling the British empire during Thatcher’s decade-long tenure as PM, during which her political tenacity and strict adherence to ultraconservative positions gave her the nickname, “the Iron Lady.” She was a politician who claimed, according to the play: “Socialism is the philosophy of failure, the creed of ignorance, and the gospel of envy.”

The queen, given the limited opportunities provided a British monarch to address such issues, comes off as far more liberal, especially with regard to the distribution of wealth between the rich and poor. Ironically, she herself is described by Thatcher as the richest woman in the world as well as someone who paid no taxes until 1993.

As we learn of Thatcher’s personal background, her education, and her political ideology (those famous “trickle-down economics”), we’re forced to ponder the significance of the British monarchy in the face of the multiple international and national events dealt with during the Thatcher years, developments that made the PM fear for the decline of the beloved empire.

Packed into the play’s two hours, almost to bursting, are discussions dealing with the transformation of Rhodesia into Zimbabwe, IRA terrorism, President Reagan’s visit to England and Thatcher’s relationship with him, mass protests against racism and poverty, Princess Diana’s marriage to Prince Charles, the invasion of the Falklands, the end of the Cold War, a crippling miners’ strike, the Brighton hotel bombing during a Conservative party conference, Indira Gandhi’s assassination, the controversy surrounding US forces being permitted to fly missions from British bases, South African apartheid, Thatcher’s disastrous poll tax (which contributed to her ultimate defeat), and so on. It’s a hell of a lot to digest, especially, I imagine, for those unfamiliar with the allusions.

Both Q and T, especially the latter, excellently bewigged (by Dori Beau Seigneur) and costumed (by Richard Kent, who also did the set), are convincing avatars of Elizabeth and Margaret, particularly the latter. Although Liz and Mags look less like their originals, they’re both exceptionally good—as are the actresses playing T and Q—at conveying their characters’ well-known physical and vocal mannerisms, notably those fluty, snooty accents. The monarch comes off as appealingly sweet-natured, chipper, and humane, while the politician is all patronizing deference and steely hauteur.

Staged in a three-walled, black box with a white floor and several pieces of white furniture, the play is a metatheatrical exercise (we keep being reminded we’re in a theatre watching a play) built around the imagined conversations of the queen and the PM during their regular meetings for tea and biscuits. There also are reminiscences of their visits with one another at other locations, like the queen’s ancestral residence at the dismal (to visitors, if not the queen) Balmoral.

Typically, Liz and Mags converse in chairs on either side of a tea service while their senior selves range about nearby, standing with formal grace, their handbags hanging in the crook of their arms, commenting on the comments of their junior selves. Often, they interject casually to deny that they said what we’ve just heard. Some of the conversation is humorously gossipy, even catty. Occasionally, subtextual reflections of Donald Trump arise, including a reminder of how British politics in the 80s caused friends and family members to stop speaking to each other.

Meanwhile, multiple historical figures from the passing years appear as Actors 1 and 2 represent them with the help of either small costume changes, like a pair of spectacles, or substantial ones, like the red dress donned when the goateed, ponytailed Actor 2 plays Nancy Reagan. Familiar individuals, each clearly delineated, like Nancy’s cowboy-hatted husband, IRA leader Gerry Adams, Rupert Murdoch (think Ink and “freedom of the press”), and Prince Philip pop in and out along with less recognizable personages, for most Americans, like Peter Carrington, Enoch Powell, Neil Kinnock, Michael Shea, Geoffrey Howe, Denis Thatcher (Margaret’s husband), and everymen like a footman and a protester.

It’s hard to watch Handbagged without contemplating an American equivalent, especially one that revels in our current political situation. Who would you like to see one day set off against each other in a dramatic confrontation? Right now, I’d vote for Pelosi and Trump.