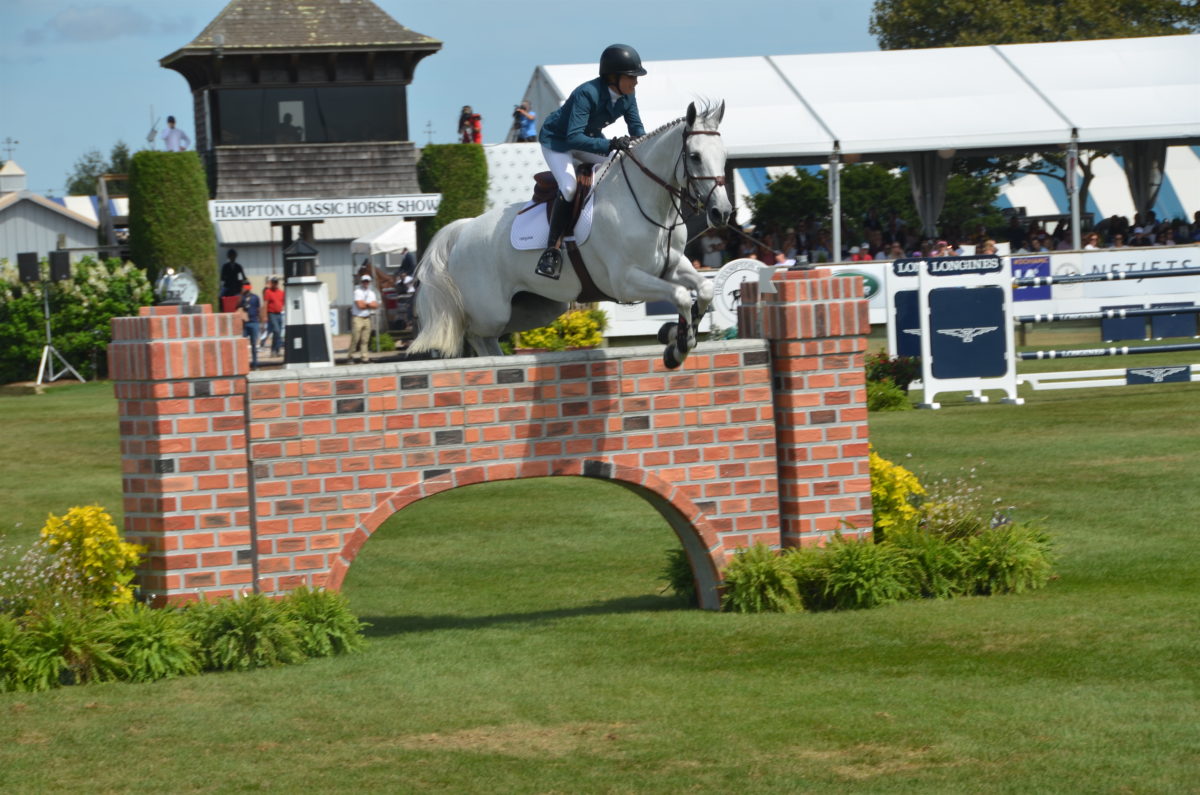 An annual tradition signaling the end of summer and the famed Hamptons social season, the Classic hosts every level of horse and rider from the smallest lead-line competitor up to World Cup, World and Olympic champions.

The Deslauriers family will have extra celebrating to do after this particular win. Mario’s daughter, Lucy, who just returned from being part of the U.S. bronze-medal winning team at the Pan American Games, had a stellar week at the Classic.  She followed a win on Friday in the $75,000 Douglas Elliman Grand Prix Qualifier with a second-place finish in Sunday’s marquee event. Lisa Deslauriers (wife of Mario and mother of Lucy,) a past Grand Prix and USET competitor, is Chairman of the Board of the Hampton Classic.

Course Designer Michel Vaillancourt built a challenging course at the maximum height of 1.60m, including a triple combination which took the competitors nearly the entire length of the packed VIP tent The tough course was a true test of ability, resulting in just three of 39 combinations progressing to a jump-off round.

The start order for the class was determined by the final placings in Friday’s $75,000 Douglas Elliman Grand Prix Qualifier, which meant the better you did Friday, the later in the order you went on Sunday. Lucy Deslauriers had the luxury of being the final rider to go in the jump-off; American team gold medalist from the 2018 World Equestrian Games, Devin Ryan with his WEG mount Eddie Blue went first, sandwiching Mario Deslauriers in the middle.

The jump-off course consisted of eight jumping efforts, in a series of S-curves across the ring from side to side, and a long gallop down to the last fence headed toward the in-gate. Ryan misjudged the striding to the second fence and Eddie Blue had it down. They were able to hold it to just the four faults, crossing the timers in 42.66 seconds.

Next to go, the senior Deslauriers executed a masterful pivot turn with Bardolina from the third fence in front of the VIP tents, to cross in front of the open water, cutting across the field to the Hermès oxer at fence four. They were slightly off Ryan’s time, but more importantly they kept the jumps up to finish on a clean score in 4282 seconds.

Last to go, Deslauriers’s 20-year-old daughter also took the inside turn with long-time partner Hester, and with his effortless galloping stride they easily had the best time, finishing in 39.60. However, in a heartbreaking turn, they pulled the top rail on the final fence, to finish second on a score of four faults.

“I got a little excited,” admitted Deslauriers as she recounted her jump-off round. “If I had it to do over again, I should have pulled a little harder to the last fence.”

When asked what he was thinking as he watched Lucy follow himin the jump-off, knowing that if she had a rail, he would win the class, Mario replied: “Lucy won on Friday so today was my turn! Seriously, she and Hester make a great pair, and I know they are very quick. I did what I had to do to put a little pressure on her.”

Mario Deslauriers received beautiful new timepieces courtesy of LONGINES for his win, as well as a check for $99,000.00 and a beautiful award of a large-format bottle of Whispering Angel wine from Chateau D’Esclans. Lucy’s check was for $60,000, but she had to ask her mom to carry her wine – she’s not old enough to drink yet!

For each of the seven years the $30,000 LONGINES Leading Rider Challenge has been in place, it has been won by an Irish rider, going back and forth between Sweetnam and countryman Richie Moloney. With his consistent results this week, Shane Sweetnam secured another win, amassing 364 points to finish on top for an incredible third year. He received the $30,000 prize as well as a lovely new timepiece courtesy of LONGINES.

The 44thHampton Classic featured over 200 classes in six beautifully manicured show rings. One of the most spectacular equestrian events in the nation showcasing the highest levels of hunter-jumper competition, the world-class event hosts hundreds of top riders and horses from all over the nation and world.