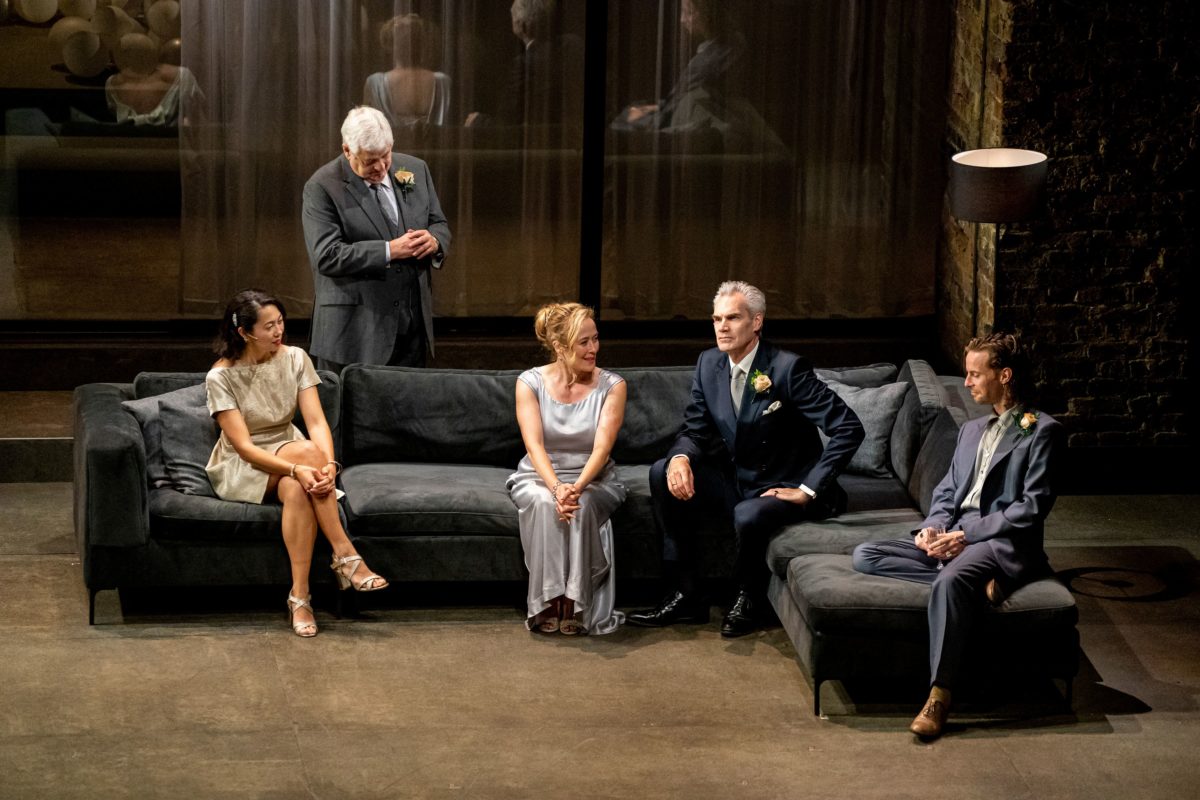 Hildegarde Bechtler’s expansive, sparely furnished platform stage, tastefully lit by Natasha Chivers, is on two principal levels. The lower, main one resembles a living room and contains a sectional sofa at one side and a chair and lamp table at the other, regardless of what takes place in it (it serves, for example, as Gertrude’s “closet”). The slightly higher, upstage one is separated from downstage by large, sliding glass doors or sheer curtains, acting somewhat like the “inner below” of Shakespeare’s Globe. This being a multimedia production, large video screens appear overhead as needed (Tal Yarden did the video design), along with two monitors at either side. The color scheme, like many of Ms. Bechtler’s costumes, tends toward black and white. And Tom Gibbons provides an ominous sound design, interspersed with half a dozen Bob Dylan songs, their lyrics vaguely aligning with the themes.

Icke’s production, three hours and 40 minutes long, with two intermissions (one would’ve been enough), includes considerable video. For example, the Ghost’s initial appearances on the battlement are viewed on grainy security camera transmissions. Another instance shows CNN-like news footage of events, like the advance of Fortinbras’s army, with Danish chirons even though everyone speaks English. (The clips, of course, remind us at once of Russia’s invasion of Ukraine.)

There also are live images. “The Mousetrap,” the play-within-the play, is performed by having Hamlet, Claudius, Gertrude, et al., sit on folding chairs between the stage and the first audience row, watching like everyone else in the theatre. Their reactions, though, are presented in close-ups above the action, so we watch both them and the Players. Another example comes when Gertrude, having drunk poison, lies writhing on the floor and the court videographer—for what else might we call him?—records her final moments for us all to see. Ivo van Hove—with whose Amsterdam theatre Icke is an artist-in-residence—has done this kind of thing to death and it’s time for it to R.I.P.

Despite its length, this isn’t an uncut Hamlet. Material is clipped, altered, or transposed from its original place throughout. Characters are missing as well, there being only one gravedigger [Ross Walton), and absolutely no Osric. A valuable New Yorker article explains that Icke has sometimes updated the language, collated material from the Quarto and Folio versions, and ignored the punctuation, among other things, so purists will not necessarily hear the Hamlet with which they’re most familiar. Even the dropping of a single, tiny word can trigger discomfort. Thus, where Hamlet, considering killing the king while he’s at prayer, typically says “Now might I do it pat,” “pat” gets left behind. This jumped out largely because I’ve never forgotten a semi-humorous discourse on the line in Bernard Grebanier’s wonderful book, The Heart of Hamlet, which has influenced my response to the play ever since I took his Shakespeare course 60 years ago. (There’s even an unrelated reference—I think—to the line in that New Yorker article.)

Aside from some video comments from Fortinbras (Nikesh Patel) at the end, the play concludes with Horatio’s “Good night, sweet prince” speech over Hamlet’s dead body. Given the clarity with which Fortinbras’ imminent invasion is presented earlier as part of the play’s political dynamic, this ending seems anticlimactic.

Except for the Hamlet-Laertes duel scene, played in white uniforms and masks as a classic fencing match, the modern-dress approach justifies the use of firearms, so pistols, like the one Hamlet uses to whack Polonius in the closet scene, are primary weapons. One of a number of odd moments comes when Hamlet wields his gun very near Claudius during the latter’s inconsequential prayer scene; he practically hovers over the king, Claudius even seeming to see him.

There are numerous other eyebrow-raising bits and pieces—like Guildenstern (Tia Bannon) being a young woman who seems to have had a schoolgirl flirtation with the prince—but there are also things to appreciate. The non-hurried, deliberate pacing helps the actors express their thoughts in remarkably clear, precise intonations, milking the lines for all their pregnant meanings. It doesn’t always happen, but, when it does, it makes this one of the most verbally accessible renditions of Hamlet I can recall.

Angus Wright’s perfect enunciation and rich voice as the scheming Claudius are among the greatest contributions. Peter Wight also stands out as the officious, yet never too foolish, Polonius. In a scene where he tests out Hamlet’s intentions, he makes excellent use of one of Icke’s cleverer gimmicks, delivering his reactions into his lapel as if he had a hidden mic there. On the other hand, the usually wonderful Jennifer Ehle’s Gertrude seems a bit weaker than her colleagues, possibly because she maintains her American speech (everyone else is British); despite its excellence, it has a flat affect in this otherwise posh context.

Luke Treadaway makes a solid Laertes, sturdy and straightforward, and Kirsty Rider does well enough as Ophelia, despite some of the unusual things required of her. David Rintoul, who brings Patrick Stewart to mind, makes a strong impression as both the Ghost and the Player King, but the production design doesn’t always help him distinguish one from the other.

What most distinctively rattles this Hamlet is 27-year-old Alex Lawther’s Prince (Andrew Scott, 20 years older, played it in London). Slight, androgynous, and floppy-haired, his Hamlet looks and sounds, with his persistently grief-edged, whiny delivery, more like a neurasthenic adolescent rock star than a depressed but potentially heroic figure. Modern casting practices, of course, have opened the door for physically unconventional Hamlets and other leading characters; that doesn’t mean one has to like it. Here, when Hamlet self-deprecatingly says Claudius is “my father’s brother but no more like my father than I to Hercules,” you may actually hear a titter or two. Having him take off his shirt later in the play only rubs salt in the wound.

Directors have long played fast and loose with Hamlet and done even more radical things with it than Icke. What ultimately counts is the final result and how it affects you. As Icke told the New Yorker, “the most authentic thing that exists is the relationship between the actor and the audience.” So, for reasons that go beyond textual variations and directorial innovations, it’s up to you, the audience, to determine if this relationship is to be or not to be.