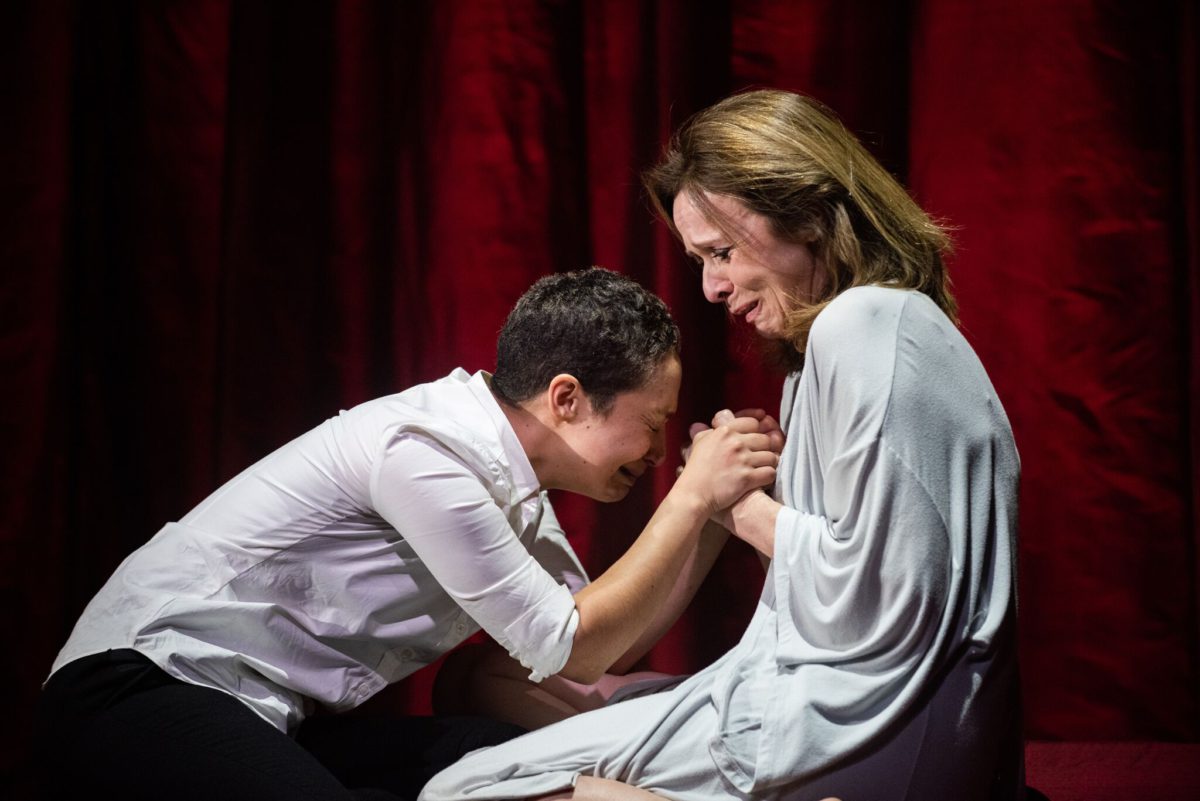 February 16, 2020: There’s a moment in the Gate Theatre of Dublin’s production of Hamlet (at St. Ann’s Warehouse in Brooklyn through March 8) when one realizes there are some very different, very unorthodox, things going on in this play. No, it’s not the appearance of a woman (Ruth Negga) playing the titular role—that’s been done, and we’ll get to that later. Rather, it’s the beginning of the scene when Hamlet visits his mother, Queen Gertrude, in her bedroom, to discuss his madness. Gertrude (Fiona Bell) is wheeled onto the stage on a blood red bed tilted at a 45 degree angle in a pose that can only be described as Christ on the Cross. There’s no mistaking it. But why? Is she being sacrificed for the sins of her unkind men? At the very least, the staging is befuddling, and certainly out of the realm of the play’s original intent or any known stage directions from the Bard himself. It’s just one of several incongruities in this production of Hamlet that is nonetheless quite enjoyable.

To be clear, director Yaël Farber (who directed last year’s unusual Mies Julie at CSC) doesn’t deviate from the script, but there are edits (several scenes are cut and blended together and some famous speeches appear considerably earlier in the play than they’re supposed to) and staging that unequivocally announce an interpretation. This is a play about a character bent on righting a wrong, and making others understand what he’s doing and why. In the bedroom scene, upon coming down from her cross, Gertrude seems to be ready, readier than in most productions, to take Hamlet as his word. And by the play’s denouement, she doesn’t need any more convincing. Her usual (and famous) stunned words, “Hamlet, the drink, the drink!” which she utters as she realizes she’s been poisoned, are eliminated here; rather, she drinks what she knows to be poison instead of continuing to be complicit in her second husband’s great crime.

Despite the play’s contemporary setting (reminiscent of the filmed version of the Royal Shakespeare Company’s 2009 version starring David Tenant), featuring characters in contemporary dress—tie-less dark suits with collarless nehru-style shirts, the occasional bowler hat and 50s or 60s style dresses for the women—it is darkly Scandinavian and foreboding, relying on John Torres’ moody and powerful lighting to create innumerable extra dimensions on Susan Hilferty’s set (she also was responsible for the simple, elegant costumes) which consists of a wall of dark doors (this has been done before) representing perhaps the myriad directions these characters lives could go, depending on which they choose to open . . . “To be, or not to be.“

Perhaps this production’s greatest asset is the flawless acting and terrific casting. Laertes (Gavin Drea) is swashbuckling and handsome, a bit of a remove from his father Polonius (Nick Dunning), who is here not such a fool as he’s often portrayed. Ophelia (Aoife Duffin) is convincingly vulnerable (with a thicker Irish brogue than others, perhaps identifying her as a lower class level than the royals with whom she consorts) and then broken, particularly once she realizes her relationship with Hamlet is over and simultaneously her reputation is destroyed. When she comes unglued, she seems to feel that she may as well seduce anyone who comes along because all will see her as promiscuous anyway. Upon handing out symbolic flowers to all those witnessing her breakdown, she makes sure to hand rue to Gertrude, playing with the double meaning of “regret” and the flower’s noted use at the time for causing miscarriages, or abortions. She knows both she and Gertrude have made very bad mistakes in their choice of men.

King Claudius (Owen Roe)—jowly and scowling, walking a delicate line between libertine old goat and evil traitor—is ideally cast. As are the three actors who play both The Players and a trio of ominous Gravediggers (Will Irvine, Ger Kelly, Gerard Walsh), sharing the (usually reserved for one character) famous banter with Hamlet during the “Alas poor Yorick” scene, which is both poignant and effectively hilarious here.

But it’s perhaps one of the best performances of the bunch, Negga’s Hamlet, that is the one unfortunate casting choice. Negga is powerful, delivering the seven soliloquies with depth and meaning, but also effectively demonstrating her rage against her uncle, Ophelia or her mother as adeptly as she engages in sword fighting in the final scene. But she doesn’t come across as *Hamlet*. Gender isn’t the issue. Many women have played Hamlet quite successfully in the past, starting over a hundred years ago with the great Sarah Bernhardt. But Negga is a small woman with a rather high voice who comes across as a pre-adolescent boy, something of a mashup of PeeWee Herman and Ellen DeGeneres. That’s not at all who Hamlet is. This isn’t a commentary on Negga’s acting, which was absolutely stunning. She’d have been better cast as, say, Romeo. Or Richard II. Even Prince Hal. But Hamlet she’s not. Either way, her performance is riveting. But Farber has made it Hamlet’s play, so it should have been better cast. There’s no “Goodnight sweet prince” from Horatio, or the arrival of Norway’s army to take control of Denmark. That’s all been cut. Instead, Hamlet (and Negga) get the last word. The rest, truly, is silence.

But outside any Shakespeare purists’ objections to liberties being taken with the play’s interpretation, Farber and company have produced an outstanding, fast-paced and gripping Hamlet—one that will re-inspire audiences’ love for the play. In a season with a dwindling number of major Shakespeare productions (so far Theater for a New Audience’s Timon of Athens has been the only other), this is raw meat to hungry lions. And it’s certainly not to be missed.