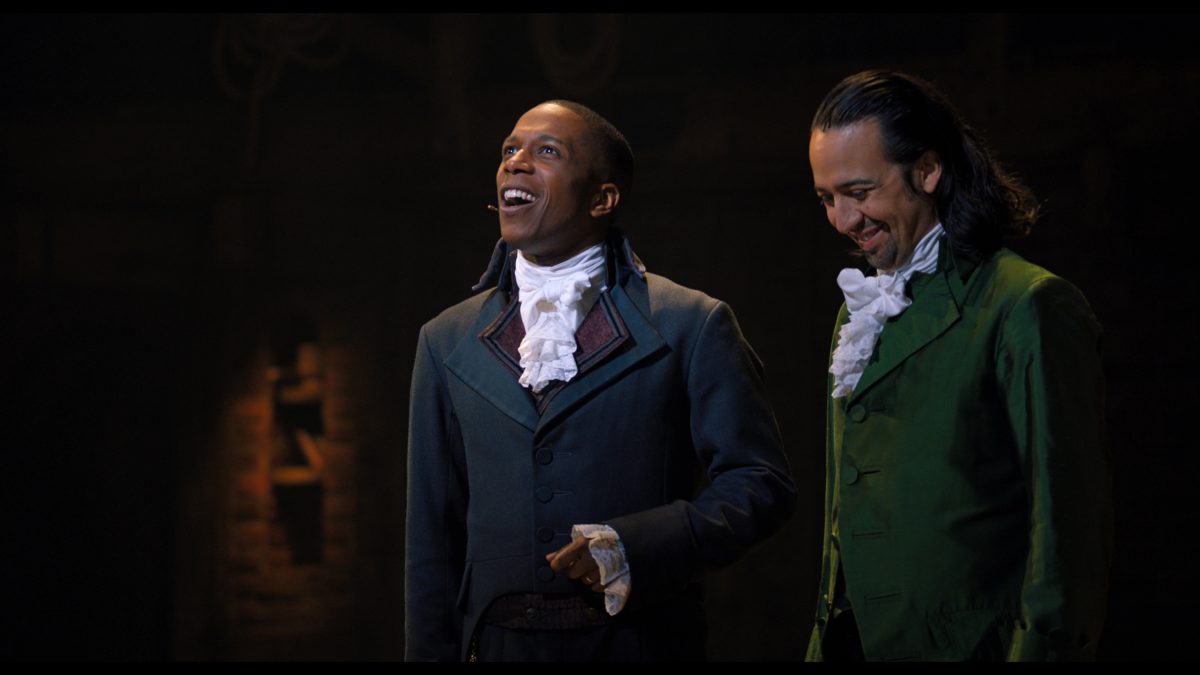 Lin-Manuel Miranda is Alexander Hamilton and Leslie Odom, Jr. is Aaron Burr in HAMILTON, the filmed version of the original Broadway production.

The Disney+ premiere will not be a film adaptation but rather a filmed performance of the award-winning musical by its original Broadway cast at the Richard Rodgers Theatre. This does not mean a single-angle recording of a stage show that looks like old VHS tapes of your high school musicals. The musical was filmed by up to 15 cameras, with one camera built into the upstage set and one camera overhead, as well as steadicams and cameras mounted on cranes. Hamilton on Disney+ will be an experience almost as good as being in ‘the room where it happens.’

Before making popcorn and settling down to enjoy this imaginative take on the life and times of the man on the ten dollar-bill, let’s take a look at the path Lin Manuel Miranda and the Public Theater took in creating this musical and turning it into a cultural phenomenon.

Hamilton’s meteoric rise relies heavily on Lin Manuel’s flowing rap skills and imagination, and the journey was helped along by In The Heights producers Jeffrey Seller, Jill Furman and Sander Jacobs. An early interest in Hamilton was taken by The Public Theater’s artistic director Oskar Eutis and executive director Patrick Willingham. The pair were stung by the failure of a previous attempt at a musical based on a historical American figure to catch on with mainstream Broadway audiences, Bloody Bloody Andrew Jackson.

In the summer of 2007, the interim between the off-Broadway and Broadway runs of Miranda’s In the Heights, Miranda grabbed a copy of Chernow’s book for some vacation reading. “I picked up the book thinking maybe I’ll get a funny song out of it,” he said.

What started as a summer read evolved into a full-blown obsession. Miranda was inspired by Hamilton’s belief in the power of words and the struggles of wit between Hamilton and fellow founding fathers Thomas Jefferson and John Adams over what form their young nation’s government would take. He became convinced that a man of such eloquent oratory could be brought to life by the power of rap.

By February 2008, In the Heights had concluded its Broadway run, and Miranda’s early image of Hamilton had formed as a rap concept album. According to Miranda, the rivalries and revelries of America’s first leaders brought the great rap grudges of Tupac and Biggie Smalls to mind.

Three months later, Miranda was invited to the White House by President Barack Obama. Although he was invited to perform selections from In the Heights, Miranda instead performed the now familiar opening number from Hamilton, in a clever maneuver of self-promotion. He would spend the better part of the next year perfecting another song from the show, My Shot.

By January 2010, Miranda had refined his vision of Hamilton to a “hip-hop song cycle” named The Hamilton Mixtape. He presented a preview of the songs at Lincoln Center’s American Songbook Series on Alexander Hamilton’s 225th birthday.

It wouldn’t be until summer 2013 that Miranda’s Hamilton project would begin to resemble the show we recognize today, reuniting his creative team from In the Heights, director Thomas Kail, choreographer Andy Blankenbuehler and musical director Alex Lacamoire. The Hamilton Mixtape was presented as a musical for the first time as a workshop production at Vassar College, the production includes the entirety of Act I and three songs from Act II.

On March 6, 2014, the Public Theater announced it would be producing the musical, now renamed Hamilton. The show made its premiere on Feb. 17, 2015.

After only a week Off-Broadway, Hamilton’s producers announced the show would transfer to Broadway later that summer. It was no great surprise that a show from the creative team behind In The Heights was always bound for Broadway, though no one could have predicted the depths to which Hamilton would pierce the cultural zeitgeist. Hamilton’s Off-Broadway run would conclude on May 3rd 2015.

On August 6, 2015, after some minor rewrites and cuts, Hamilton opened in Broadway’s Richard Rodgers Theatre. This staging would be filmed by a sophisticated multi-camera setup and locked away for eventual release in theaters. Disney had paid handsomely for the distribution rights to this live capture, in light of the recent Covid-19 Pandemic, Disney has decided to forgo an October 15, 2021 cinema release and bring Hamilton to Disney+.