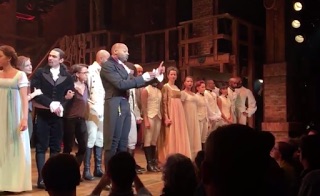 The tempest in a teapot over the speech delivered by
Hamilton cast member Brandon Victor Dixon to audience member and
Vice-President-elect Mike Pence appears to have finally died down. It has
elicited a firestorm of comments on both sides of the political aisle. The
hashtag #BoycottHamilton trended on Twitter, but it appears the box office has
not been significantly affected. A pro-Trump audience member get rowdy at a
Chicago performance, but there have not other reports of a major backlash. On a
public bus I was standing right next to a group of young people talking about
Broadway in general and how difficult it is to get tickets to the hip-hop Tony
winning show. “But it may be easier now because some people are calling
for a boycott because of the lecture they delivered,” said the young man.

“It wasn’t a lecture,” I snapped without thinking. I don’t think I was being
rude. It didn’t say it in a nasty way and the group smiled at me and went back
to their conversation. I reacted so quickly because it enraged me to have
Dixon’s remarks which were reportedly partially written by the show’s author
Lin-Manuel Miranda, characterized as a lecture. Dixon was unfailingly polite in
his delivery, even calling on the audience not to boo Pence and expressed
genuine concerns about the Trump administration’s racist (or at best race-baiting)
rhetoric during the campaign. The cast were asking the future VP to remember
ALL Americans should be treated equally and to think about the founding of our
country as depicted in the show they had just performed for him.

In a piece for the website Times Square Chronicles which she co-owns and publishes, Suzanna Bowling labelled the speech “bullying” and cast Pence as a victim of the mean old cast members. This I have a problem with. We can debate if the speech was condescending, elitist, or a lecture, but I don’t see how you can call it bullying. I was
bullied all through elementary and high school and I know what bullying is.
It’s being threatened with physical violence by someone much bigger, stronger,
and more powerful than you. When it’s used as a verb, the dictionary defines
bullying as to be intimidating or domineering someone weaker. How can the cast
of a Broadway show threaten or intimidate the second most powerful man in the
free world, surrounded by Secret Service agents and NYC police?  What were
they threatening him with? A few moments of slight discomfort? Disapproval? Bad
seats? Pointing out his own bigotry and homophobia?

Bowling also points out the event was covered by
television crews as if the media had been tipped off about the speech and they
were laying a trap to embarrass Pence. The new Vice-President who campaigned
with a racist agenda attending a show celebrating American diversity is big
news, so of course they would film it. I’m pretty sure there were photographers
and camera crews when Obama attended Hamilton, A Raisin in the Sun, and Joe
Turner’s Come and Gone. BTW, when Hillary attended Hamilton, she got booed
too–and some cheers as did Pence.

I guess what really irks me most about Bowling’s
calling the Hamilton cast bullies is that Trump is biggest bully going. He set
the combative tone by threatening those who disagreed with him during his
rallies, making personal insults his default response against opponents rather
than offering constructive alternative opinions, and generally being a
harassing jerk. Trump is the dictionary definition of a bully. And his
mouthpieces like Kellyanne Conway, Pence, and Paul Ryan have the gall to call
him “refreshing” and that he “tells it like it is.”

Bowling wrote a follow-up piece in which she
defended her characterization of the event and cast her critics as bullies for
daring to have a different view than the stereotypical liberal New York one.
She states she has lost friends because of her stance and that people are
vilifying her because she is in the minority among the theater crowd. Bowling
has a right to her opinion and to express it in whatever terms she choses. I,
in turn, have the right to criticize her use of the word “bullying”
and call into the question the right’s twisting and warping of language and to
point out that theater is not necessarily a “safe space” for elected
officials and public figures.

Art and theater have always dared to
be speak truth to power, or at any rate they should. Eartha Kitt spoke out
about the Vietnam War and the poor conditions of African-American youth when
she was invited to the Johnson White House. LBJ was satirized by Barbara Garson in
a parody called MacBird. Gore Vidal skewered Tricky Dick in his play An Evening
with Richard Nixon as did Peter Ustinov in a comedy called Who’s Who in Hell.
No doubt there will be satires aplenty on the Trump administration. Will that
be considered bullying? 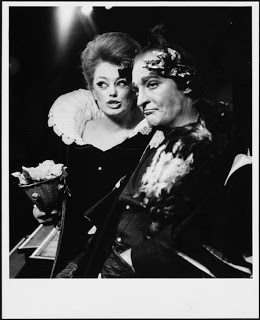 Pence has stated he was not offended by Dixon’s remarks and did not need an apology. Although I disagree with everything Pence stands for, he at least has, acted like a mature adult while his boss has behaved like a spoiled child, twitter-ranting about the Hamilton speech and whining about SNL mocking him. How would Trump have handled an audience  booing him? Probably he’d have cried like a baby on Twitter. That’s how bullies are, they can dish it out but they can’t take it.