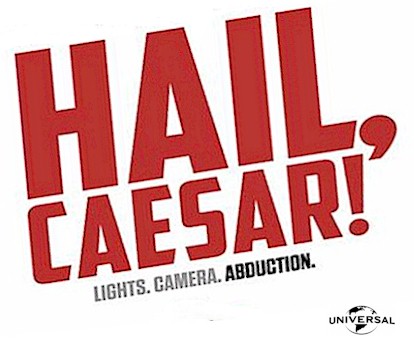 Joel and Nathan Coen co-wrote and co-directed Hail, Caesar!, a color homage to the B&W film noirs of Hollywood’s Golden Age. Its backdrop are the dirty deeds of the [U.S.] House] of Representatives Un-American Activities Committee [HUAC] “Commie” hunt and production of a religious epic: Hail, Caesar: A Tale of the Christ – a sort of homage to 1959’s film adaptation of Lew Wallace’s novel Ben-Hur: A Tale of the Christ.

There’re comedy and farce opportunities among its motley stars – more than there are in the heavens [M-G-M’s boast] – and creatives. However, since little is developed, what there is mostly lands with a dud. Sadly, for the majority of moviegoers, the box office for Hail, Caesar! may be hell no!

After the holiday glut of movies released in time to net award nominations, audiences always hope for that rare January/February treat: a great film – similar to two years ago when Wes Anderson’s inspired The Grand Budapest Hotel hit theatres.

There are filmmakers with huge followings: Quentin Tarantino, say, and Joel and Ethan Coen. Jaded audiences look forward to their films. Until the release of Hail, Caesar!, Tarrantino’s ultra-violent massacre The Hateful Eight was the film hyped to the nth degree. Both have met mixed critical and moviegoer interest.

Eight, not exactly holiday season-appropriate, opened to a dismal $4.6-million box office; but has gone on to gross $52.4-million stateside [about $10-million shy of its budget]. So, if Hail, Caesar can find rabid gun lobbyists to fill cineplex seats, there’s hope for it. As it is, with some positive critical response if not exactly a box office crush, its opening weekend was over $11.4-million. Will it stick?

The premise is interesting; the execution, superb. What’s missing is heart and story development. An hour and 46 minutes isn’t time enough time to establish plot and depth for audiences to care about that heaven-full of stars billed above the title – some with the best moments, appear ever-so-briefly.

This is not to say there’s much to admire. It’s a clapping-with-one-hand experience. There’s excellent period detail, some dazzling choreography by Christopher Gattelli (The King and I, Newsies), and stunning cinematography shot on film by Coens veteran Roger Deakins. 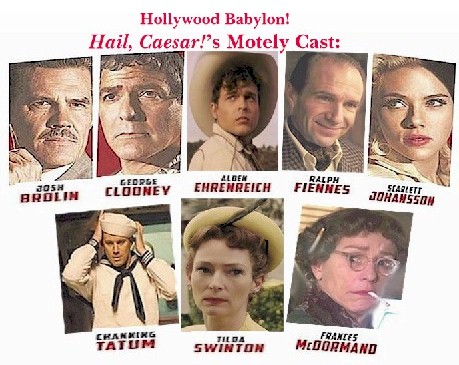 Though he has enough screen time not to be considered playing a cameo, George Clooney, as a Centurion at thecrucifixion of Christ, is a stand-in for Robert Taylor in Quo Vadis and Victor Mature in The Robe, isn’t the film’s star.

It belongs to Josh Brolin as Mannix, looking like a combination of tough-jawed Brokerick Crawford and macho Charles Bronson who’s conflicted about a job where he’s constantly surrounded by chaos. Production is halted when it’s revealed the studio king Baird Whitlock isn’t on some bender but has been kidnapped – held for $100,000 ransom.

However, the show must go on. On another soundstage, there’s a hilarious dance sequence with on-leave sailors that could have come right out of On the Town,hoofed by Channing Tatum in tribute to hoofer extraordinaire Gene Kelly — doing dazzling footwork and (maybe) crooning. With depictions of same-sex butt-rubbing and patting rear ends, they could be a bit light-in-the- loafers [a way back then term for homosexuals]. While very quick and hilarious, that sort of horseplay would either happen after the director yelled “Cut!” or would be cut due to Hays Code (censors of the day) demands to protect public morals. Tatum, as we later discover, is active in a cartel and hiding another secret.

The movie is stolen outright by Alden Ehrenreich (last year’s Running Wild; 2013’s Beautiful Creatures) as a singing cowboy ala Gene Autry and Roy Rogers who’s never had elocution lessons; and the barely-recognized Frances McDormand as a chain-smoking editor dealing with flammable film.

Now, for the cameos. Wayne Knight (who had numerous roles on Broadway and worked Off at the Public before Seinfeld and Jurassic Park),who mugs as a lyre-playing Roman slave, is a kidnapper. Then, there’re former Tarzan Christopher Lambert, Dolph Lundgren, Allison Pill, and Fisher Stevens.

For two screen veteran and lover of films, there’re two huge blunders. Since the film revolves around the HUAC hearings that resulted in the blacklisting of writers/directors/actors—the so-called “Hollywood 10” [though there were many more whose lives were ruined] – thought to be “Reds,” the year would logically be 1947 [depicted in last year’s Trumbo]. Westerns in the 40s into the 50s were almost always shot in B&W; and Cinemascope didn’t widen those square screens until1953.

The Coens get many aspects right, but Hail, Caesar! is never the sum of its parts.