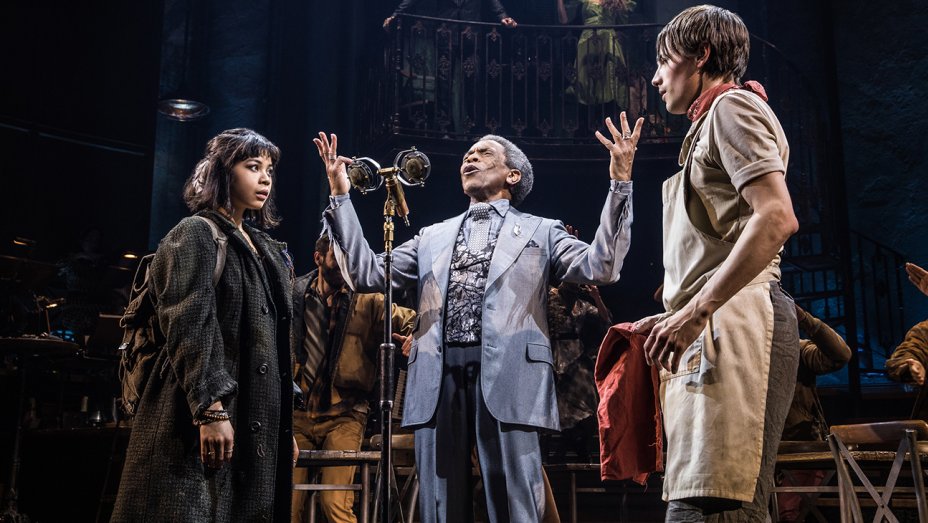 Embodying the mythical god, Hades, Patrick Page speaks and sings deep in the lower ranges. At times his guttural sound evokes the existential croonings of Leonard Cohen, but Hades’ rants are truly exposes on evil. As he puts it, “You hear that heavy metal sound? The symphony of Hadestown, and in this symphony of mine are power chords and power lines”.

In contrast, Eurydice, as portrayed by Eva Noblezada, is a pixyish young woman, with the wispy voice of a balladeer. We first meet her hanging out in a café with a bunch of folks, singing about hard times. Eurydice complaining of hunger and homelessness. In spite of herself, she falls in love with Orpheus, a poor boy with a gift.  “He could make you see how the world could be in spite of the way that it is”.

But such gifts pale in the presence of the mighty King Hades who arrives, under the gathering storm of Eurydice’s despair and deprivation, luring her into the underworld with false promises. The rest is the same “old tale from way back when.” Try as Orpheus does to alter the tragic ending to their romance, and beyond that to take what is wrong, and right it, he fails.

In this role, Reeve Carney (Spider-Man Turn Off the Dark) demonstrates a superhero’s instinct. Even though his physical appearance is tragically frail, his poetic and musical soul elevates him in our minds.

Hades, on the other hand prevails, building walls to protect his city and keep him free. “The wall keeps out the enemy,” he sings. Explaining that the enemy are the “have nots,” who threaten him because they want the wealth he so greedily possesses.

Written and composed by Anais Mitchell, Hadestown is an ineffable kind of storytelling that challenges where our stories come from, if not from ourselves. As Hermes, the god who is light of foot, the septuagenarian Andre De Shields reminds us, we can’t alter the old story, revise the archetypes, or deny the truth told in fiction. What is within our means, is the ability to change our lives based on the knowledge we’ve now obtained from listening to the story.

Directed by Rachel Chavkin this musical is something of an epic undertaking, as it takes us on the railroad from earth to Hades, morphing mythology with contemporary life. It’s beautifully conceived, executed, and staged in a most unusual way.