The first London production to be seen for 40 years, Jonathan Kent’s production of Gypsy, with book by Arthur Laurents, originated at the Chichester Festival Theatre
before moving to the West End’s Savoy. Kent was Tony-nominated as director of
last season’s Roundabout’s Tony and Drama Desk-nominated revival of O’Neill’s Long
Day’s Journey into Night.

In addition to the OBE-dubbed Staunton as Rose, Lara Pulver co-stars in the
title role, with Peter Davison as Herbie. The show was a record-breaking
sellout during its run and won five Oliviers – including Best
Musical Revival, Best Actress, Musical, and Best Actress in a Supporting Role,
Musical.

Critics were unanimous in their praise of Staunton, with one stating she gave
“one of the greatest performances ever seen in musical theater.”

Laurents’ book was suggested by the memoirs of  vaudeville star and exotic
dancer Gypsy Rose Lee, who rebelled from her mother’s act where she played
ingénues. She went from trekking cross country in juvenile roles, appearing
opposite her sister June [Havoc], to playing the burlesque circuit, where she
achieved international stardom and went on to appear in film.


The score features songs that have become standards: “Everything’s Coming Up Roses,”  “Some People,” “You’ll Never Get Away from Me,”  “If Momma Was Married,”
“Together, Wherever We Go,” “Let May Me Entertain You,” and, the finale of
finales, “Rose’s Turn.

Staunton received Oliviers for two 1985 productions, Alan Ayckbourn’s A Chorus
of Disapproval and Emlyn Williams’ The Corn Is Green; and, in 1991, for Sondheim’s Into the Woods. Her amazing body of work onstage, in film, and on TV includes the West End Sweeney Todd, co-starred with Michael Ball and directed by Kent. Films include Sense and Sensibility with Dame Emma Thompson and Kate Winslet, opposite Gwyneth Paltrow in Shakespeare in Love, her Oscar-nominated performance in Vera
Drake,  Harry Potter and the Order of the Phoenix, Harry Potter and
the Deathly Hallows (Part 1), and Maleficent, opposite Angelina Jolie.

Gypsy, which premiered in 1959, was Tony-nominated for Best Musical,
with nods also to Ethel Merman, in one of her most notable performances, and
Sandra Church. The late Jack Klugman was also nominated. It played 702
performances. It’s considered the penultimate  show business musical.

Gypsy was taped by Lonny Price for Ellen M. Krass Productions, Serpent
Productions, and Shout! Factory,  in association with the BBC. 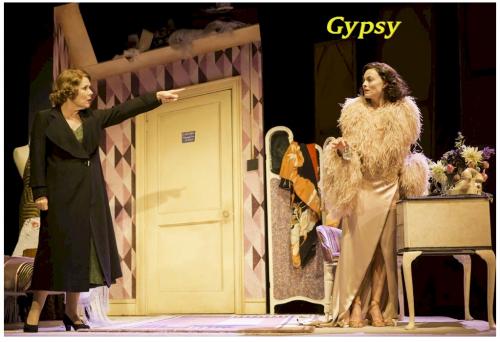