The future and past of musical theater are being triumphantly celebrated this week on Broadway with two exhilarating new productions. Groundhog Day, based on the 1993 film comedy starring Bill Murray, combines an innovative premise with a fresh, eclectic score influenced by many genres, while Hello, Dolly! is a sterling example of the Golden Age of Tuners employing a familiar template and tropes so well that it seems brand new. 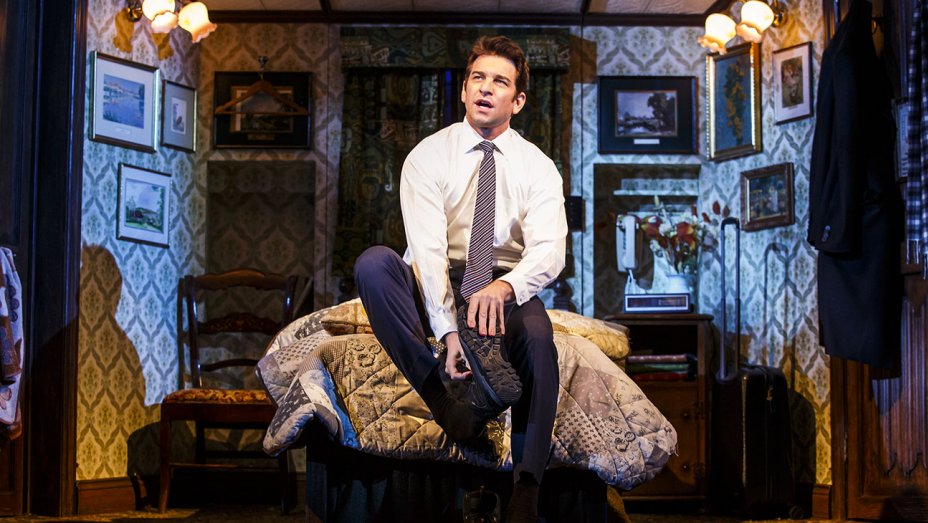 The future and past of musical theater are being triumphantly celebrated this week on Broadway with two exhilarating new productions. Groundhog Day, based on the 1993 film comedy starring Bill Murray, combines an innovative premise with a fresh, eclectic score influenced by many genres, while Hello, Dolly! is a sterling example of the Golden Age of Tuners employing a familiar template and tropes so well that it seems brand new.  At the center of both are outsize lead performances. One is a surprising turn by a steadily-working pro breaking out of the ranks of the reliable into stardom and the other is a highly anticipated outing by an established megastar which confirms her status as a world-class entertainer. Andy Karl rockets into the stratosphere in Groundhog Day and Bette Midler soars even higher in Hello Dolly! Ironically both have had trouble during preview performances. Karl suffered a knee injury which put him out of a few showings and Midler had a coughing fit, briefly delaying her big Act One finishing number during an evening show. As of this writing, Karl has returned to the show and Midler has had not further reported interruptions.

The devastatingly handsome Karl has played supporting roles in such shows as Legally Blonde, 9 to 5, The Mystery of Edwin Drood, and On the Twentieth Century. He played the title role in the relatively short-lived Rocky, but his work as Phil Connors, a smug weatherman with a deja vu problem has earned him an Olivier Award for the London production and will grab a basketful of nominations and prizes for the American premiere. The plot conceit of book-writer Danny Rubin, who also penned the original screenplay, is devastatingly simple. Connors is stuck in a time-loop, endlessly reliving the same excuriatingly dull 24 hours when he must cover Groundhog Day festivities in a tiny Pennsylvania hamlet. Without imitating Murray, Karl captures Phil’s gigantic egotism, his dizzying descent into despair and madness, and incremental attempts to become a better person as he adjusts to this hellish repetitive cycle. He flavors Phil’s narcissism with just the right hint of charm so we don’t find him a beast and his gradual transformation to decency is believable. He’s equally credible and fun as a snide lout, a drunken lech, or a budding humanitarian, plus his vocals and physical movement skills are top notch.

The surrounding production, inventively staged by Matthew Warchus and designed by Rob Howell, is a feast of the imagination. Variations on the same segments of time are played out from different angles and perspectives, achieving an almost cinematic quality (Hugh Vanstone’s lighting aides immeasurably.) Set pieces fly apart, revolve, and reassemble like a giant jigsaw puzzle. Tim Minchin’s multi-leveled score and witty lyrics push the story along and provide character insight. As noted, the musical vocabulary extends beyond Broadway to rock and country.

Barrett Doss makes an appealing leading lady as Rita, Phil’s news producer and object of affection, matching Karl’s snark with spunk. Rebecca Faulkenberry, John Sanders, Andrew Call, and Raymond J. Lee have individual moments to shine in smaller roles. So this is not a one-man show, but Andy Karl is the brightest spot in Groundhog Day.

While Karl is getting his first taste of unqualified, above-the-title stardom in a major hit (no counting Rocky), Bette Midler is reasserting her claim as a combination supernova and goddess in the ultimate “big-lady” musical, Jerry Herman’s Hello, Dolly! Incredibly, this is the Divine Miss M’s Broadway acting debut in a leading musical role. She did play one of Tevye’s daughters in a replacement company of the original Fiddler on the Roof, headlined two concert productions, and played legendary agent Sue Mengers in the solo show I’ll Eat You Last. She brings all of her considerable talents to bear in this scintillating revival. You would think after Carol Channing’s numerous returns in the show, there would be nothing new to be found in this war horse. But director Jerry Zaks, Midler, and a superb company breath new life into the old gal.

Zaks and choreographer Warren Carlyle give the show speed and youthful energy and Santo Loquasto has created Easter Egg-bright sets and costumes, while Midler injects her own style of raucous comedy into the role, plus she unabashedly plays to her adoring fans—just about everyone in the civilized world—and establishes a personal connection. Though her voice is limited, she brings reams of subtext to each number, even playing off her supposed exhaustion by leaning against the proscenium arch (But she wisely keeps such schtick to a minimum.) From the first moment when she peaks out from behind a newspaper with impish eyes aglow to her grand entrance in Loquasto’s stunning red gown down that stairway for the big title number, Midler takes command of the stage, implicitly saying to the audience, “Look, I know this show is kinda corny, but let’s have some fun with it, kids.” Even a coughing attack just as she began “Before the Parade Passes By” at the performance attended did not stop her from wrapping the entire Shubert Theater around her little finger. She made a joke of her hacking, plowed right on after co-star Gavin Creel brought her a cup of water, and deservedly received the first of three standing ovations.

David Hyde-Pierce’s ultra-stuffy Horace Vandergelder is the perfect foil for Midler’s life-embracing Dolly. Gavin Creel and Kate Baldwin are a gorgeous couple as Cornelius and Irene while Beanie Feldstein and Jennifer Simard steals their scenes as Minnie and Ernestina. This joyous Hello, Dolly! is a loving salute to a past tradition while Groundhog Day shows us its dazzling future.