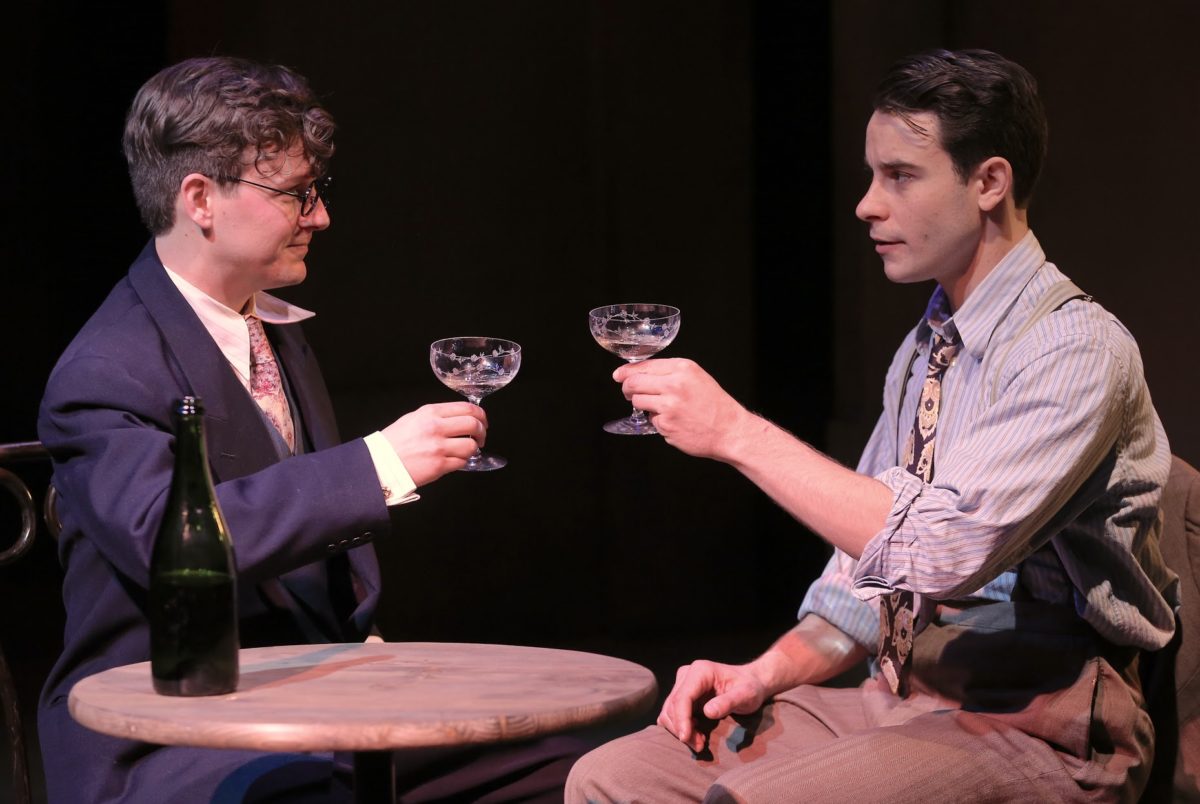 There have been many others since then, both on and Off Broadway, and around the world, as this list reveals, often with titles of which most of us have never heard. Two I’ve covered in the past few years include Wiesenthal, about the eponymous Nazi hunter,and Terezin, about that particular concentration camp (a.k.a. Theresienstadt).And, of course, countless movies and TV dramas have dealt with this tragic period.

Yet such works keep coming, often with unfamiliar historical information that further demonstrates the horrors, heroism, and hatred of the times. Such works, no matter how many, are necessary to prevent us from forgetting a historical catastrophe that is rapidly slipping into a forgotten past, especially at a time of rising anti-Semitism. That, indeed, is the avowed intention of Ira Fuchs, whose play Vilna, at the Theatre at Clement’s, deals with the impact of the Holocaust on the Lithuanian city of that name (a.k.a. Vilnius).

Fuchs, 67, had begun writing plays when he was 21, then enjoyed a career as an entrepreneur in computer technology, returning to playwriting in 2016 after he retired. According to a piece in Jewish Week,his instructor in a course at Hollins University asked for a play based on a current news article.

The one he chose, from the New York Times, was based on the recent archaeological discovery of an escape tunnel dug with their hands by Jews in 1943 working on a mass execution and burial site in the Ponar Forest, near Vilna. It’s fascinating and you can read about it here. This source gives a different number than Fuchs for how many died and how many survived; Fuchs says that 80 made the effort, 12 survived, and 11 lived past the war. Regardless, one was Mordecai (Motke) Zeidel, Vilna’s principal character, who, before he died at 85, told his story in a video at Yad Vashem, Jerusalem’s Holocaust museum.

Although the escape was Fuchs’s motivation for writing the play, we must first watch 35 scenes in a panoramic, episodic drama mingling fact and fiction to outline Motke and Yudi’s lives from 1926 to 1943, when they carried out what is depicted as Yudi’s plan. The play is framed by a prologue and epilogue featuring Motke’s ghost (Mark Jacoby). He introduces what we’re going to see and then, after the last three scenes have shown the planning and beginning of the escape, returns to tell us of how it turned out.

Until then we watch an informative but rather static drama of how Motke (Sean Hudock), Jewish, and Yudi (Seamus Mulcahy), the orphaned child of a Jewish mother and non-Jewish German father, became friends at age 11 in 1926. (This seems to be a chronological liberty, given that Jewish Week says Motke was born in 1925). We learn about how the Jews made Vilna—a city whose sovereignty bounced back and forth among Lithuania, Russia, and Poland—a beacon of culture, but also of the oppression they suffered in countless ways.

Much of this is expressed through the experiences of Motke’s parents, his physician mother, Dr. Naiomi Zeidel (Carey Van Driest), and his glove manufacturer father, Josef Zeidel (Mark Jacoby). As the scenes flash by, with projections of the years (1926, 1927, 1928 . . . 1943) and, sometimes the specific months, we see the travails of living under authoritarian, anti-Semitic rule, and the arrival of the Russians and then the Nazis.

Twenty-one characters played by 11 actors create a panoply of events depicting life under these conditions. Because of his background and German fluency, Yudi is taken in by Motke’s parents, takes over Joseph’s business (because of legal restrictions placed on the Jews), and becomes a civil engineer responsible for designing Nazi death camps (he vomits when he realizes what the required shower heads are for). He resolves this moral quandary by deliberately introducing structural flaws, although this later leads to trouble.

The multipronged drama throws its net far too wide, describing how the Nazis packed into the Vilna ghetto thousands more people than it could safely hold, yet watched it not only avoid serious outbreaks of disease but thrive commercially; how a beautiful chanteuse, Chayale Rosenthal (Sophia Blum), came into Motke and Yudi’s lives; and how Jewish leaders were organized into the Judenrat, a civil council to oversee Jewish life on behalf of the German occupiers.

We observe how these people, under hospital director Jacob Gens (Nathan Kaufman), were forced to confront the moral dilemma of having to select other Jews for extermination, beginning with the infirm; how a resistance movement was led by poet Abba Kovner (Tom Morin); how Motke, Chayale, and Yudi were assigned to extermination site duties; and, among other things, how a poor, Gentile friend named Pietr (also Tom Morin), figured a bit too coincidentally in the events depicted.

Naturally, much time is spent on the villainous Nazis, specifically, three cruel, sadistic officers, each based on real ones, Martin Weiss (Brian Cade), Einsatzgruppe, Humbert Achamer-Pifrader (James Michael Reilly), also Einsatzgruppe, and Bruno Kittel (Paul Cooper), Oberscharführer of the Einsatzagruppe. Fuchs gives Weiss, for example, some bone-chilling lines, spoken with mathematical objectivity, about how best to pile bodies in a burial pit, while Kittel’s atrocious behavior has him dangling Yudi from a noose.

Yes, some of this is strong stuff. But the effect is more momentary than cumulative because the events are stretched out over so long a period of time. This robs the play of more than temporary intensity, as scene follows scene, with actors, under Joseph Discher’s direction, dutifully carrying furniture on and off as quickly as possible while we wait for the next scene to begin. Eventually, the dramatic tension decreases instead of the opposite, with occasional spikes only during the more brutal scenes. And when we begin looking at our watches, we know the two hour and 15-minute play is on a slippery slope.

Vilna’s many scenes are enacted on Brittany Vasta’s unit setting, not unlike the arrangement of an Elizabethan stage, with central archway, and doors to either side. Harry Feiner’s lighting creates the appropriate moods, Devon Parker’s civilian and military costumes are period-detailed, and Jane Shaw’s sound design ties the scenes together with German radio pronouncements (Hitler, perhaps?) and period songs, most of which sound, to my un-German ears, to be in that tongue.

The company ranges from adequate to fine, with the weakest performance belonging to the miscast Mulcahy and the strongest to Tony Nominee Mark Jacoby, especially when he speaks as Motke’s ghost. In those scenes, his face, voice, and bearing take on a striking resemblance to Christopher Plummer’s.

Vilna is a noble effort but it needs compression, not expansion, to make its points, and might have been more powerful starting later in Motke and Yudi’s life. Fuchs believes the theatre can inform better than other mediums. Perhaps, but Vilna might not be the best example of that. As so often, seriousness of subject matter, thorough research, and emotional intention are no substitute for dramaturgic skill.