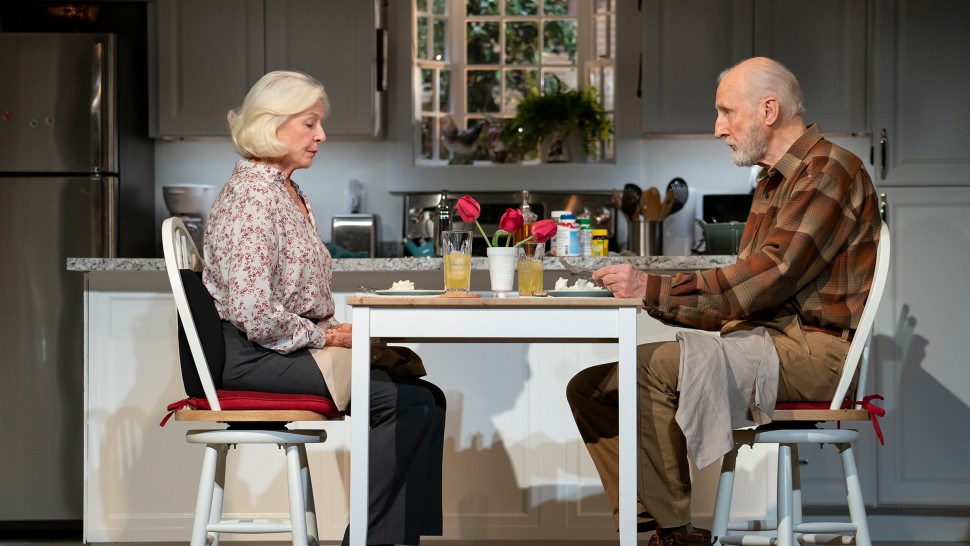 Indeed, the satiric edge and simply drawn characters feel like they’re at a different cross road in society – one that isn’t burdened by the political state of things. No mention of such things here, you can be sure.

That the characters are easy to understand and feel so recognizable is highlighted by the well-known actors who inhabit them. Jane Alexander portrays the scorned and scornful wife, James Cromwell (Babe) her philandering husband, Priscilla Lopez (A Chorus Line) his love interest and Michael Urie is the gay son. They’re joined by Ben McKenzie the couple’s older son and his pregnant wife played by Ashley Park.

Clint Ramos’ townhouse is unimaginatively square with a white interior, copper Jell-O molds lining the kitchen wall, and bright red handles all around for less mobile senior residents. The curtain gives us the Google map view of the community – little houses on a flat terrain, ticky tacky houses that look all the same. Similarly, Linda Cho’s costume designs resemble the new arrivals rack at TJ Maxx.

Directed by Leigh Silverman, the comedy is aimed at the older generation, ageing parents soon to be grandparents. However, Nancy (Jane Alexander) is a wife and mother who missed every wave of feminism, never having had even a bank account in her own name. And her husband Bill (James Cromwell) is a lame duck whose idea of adventure falls shockingly and benignly short. In spite of Brian’s (Michael Urie’s) need to be the loyal son, his efforts land adorably off color.

With such regular kinds of characters propelling the story, Priscilla Lopez stands out for her heightened characterization of a woman on the make. Her high-pitched personality is enough to push the story over the edge. And Ben McKenzie, a sublimely slick businessman finds himself sandwiched between his ageing parents and his pregnant wife.

It’s a refreshing production that resonates with playwright Bess Wohl’s award-winning earlier works. Among them, Small Mouth Sounds and American Hero, the latter also produced by Second Stage and directed by Silverman.

Here again, we meet sympathetic characters, seeking connection and dealing with the problems of an ever-changing world.  It’s a gentle comedy finished with Hollywood gloss.