By: David Sheward
Two new, effective Off-Broadway shows defy expectations, but in different ways. Branden Jacobs-Jenkins’ Gloria starts out as a fairly conventional office comedy with a bunch of 20somethings bitching about their nowhere editorial-assistant jobs but then takes a bizarre turn and veers into uncharted territory. 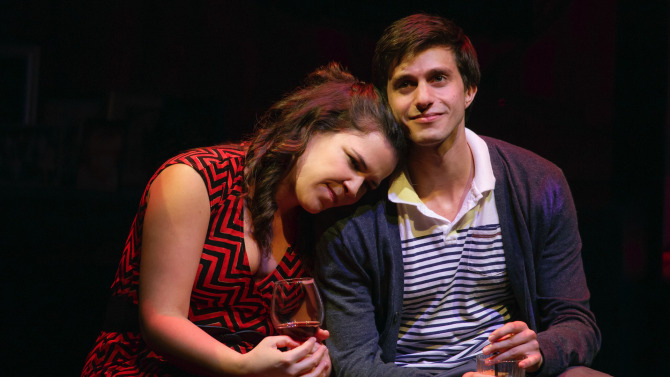 By: David Sheward
Two new, effective Off-Broadway shows defy expectations, but in different ways. Branden Jacobs-Jenkins’ Gloria starts out as a fairly conventional office comedy with a bunch of 20somethings bitching about their nowhere editorial-assistant jobs but then takes a bizarre turn and veers into uncharted territory. Joshua Harmon’s Significant Other  with Jacobs-Jenkins, we’ve come to expect the unexpected. He turned racial clichés and tired theatrical templates inside out in his Obie-winning plays An Octoroon and Appropriate. The path Gloria takes is similarly twisted. We begin in the confining cubicles of a quartet of diverse drones at a major magazine. Their complaints detail the sagging fate of mass media over the past few decades. As the internet overwhelms print, three of the four find themselves stuck at unfulfilling assistant positions; the fourth is a smiling college intern with no clear goals. The two main catalysts for action involve the early suicide death of a once-popular singer and the pathetic housewarming party of the longtime, gloomy copy editor (the titular Gloria). Just as you think the author can’t develop his premise any further than the end of the first act, a shocking event changes everything and we are taken in a totally different direction.t Roundabout’s Laura Pels space, also covers the familiar ground of young people bemoaning their lack of purpose. In this case, the cri de coeur revolves around romance rather than career and, unlike Jacobs-Jenkins, Harmon has no great surprises up his sleeve.
But he charts the protagonist’s journey through the urban landscape of loneliness with such compassion and wit that the play becomes a compelling portrait of yearning youth.

The show’s press agent has requested critics not relieve what that event is, but it allows the brilliant Jacobs-Jenkins to ruminate on several issues roiling throughout modern America. These include the corrosive effect of the web on mass culture, the pervasiveness of violence and its traumatic afterburn on victims, and the cannibalistic nature of film, TV, and what’s left of the publishing industry. Evan Cabnet directs with just the right amount of understatement and the versatile six-person cast is nasty and moving in equal measure. Jeanine Serralles is particularly memorable as the Eeyore-like titular character and when she gives a stunning monologue describing the explosive act which changes everyone’s lives. Gloria is an insightful and thought-provoking portrait of how we live now.

Joshua Harmon is another young playwright with an impressive resume. His Significant Other is not as challenging as his acidic Bad Jews, a smash hit at the Laura Pels a few seasons back, but the new play is a tender and fun evening though the set-up is a familiar one. His hero Jordan is a cute, engaging and clever gay young man in search of a boyfriend. He feels abandoned as all three of his female BFFs march down the aisle. With marriage equality now the law of the land, Jordan’s kvetching could have come across as whining, but Harmon largely sidesteps the victim trope and emphasizes the universality of the difficulties of finding a soul mate. Although he does give Jordan a hissy-fit monologue late in the second act pointing out the ridiculous excesses of the hetero wedding industry.

Jordan could easily have become an entitled obnoxious neurotic, but Harmon’s dialogue is so fresh and snappy, Trip Cullman’s direction so compassionate and well-paced and Gideon Glick’s performance so endearing and layered we weep and laugh along with him. Lindsay Mendez, Carra Patterson, and Sas Goldberg are a riot as the trio of girlfriends while Barbara Barrie is luminous as Jordan’s loving grandmother, an embodiment of Jordan’s family.

The Tempest **
June 16-July 5. The Public Theater/Shakespeare in the Park at the Delacorte Theater, Central Park at W. 81st St., NYC. Tue.-Sun., 8 p.m.
Running time: two hours and 45 mins. including one intermission. Free. www.publictheater.org.
Originally Published on June 28, 2015 in ArtsinNY.com