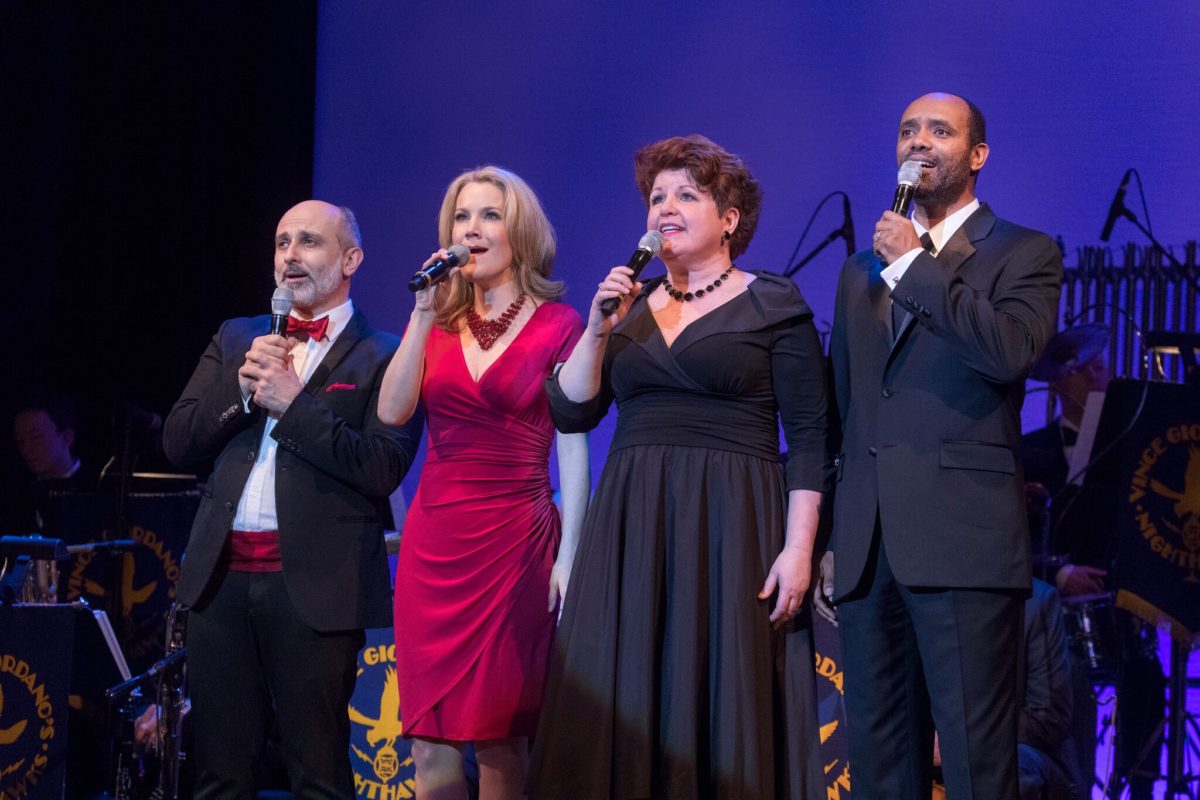 The 92nd Street Y opened the season of Lyrics & Lyricists with a tribute called “Harold Arlen, The Early Years” concentrating on the songs he composed in 1930’s. One of the most prolific and remarkable songwriters of the last century, Arlen is considered in the same category of greats such as Jerome Kern, Irving Berlin, Coe Porter, The Gershwins, and Rodgers & Hart.  Born Hyman Arluck in Buffalo, NY in 1905, his cantor father Samuel saw his early promise for music as a pianist, composer and arranger. By the age of 15, Arlen was working in a band and later played for an 11-man group called the Buffalodians. It was wonderful to see a vintage clip of this band from 1926 with Arlen at the piano playing “Buffalo Rhythm.”

The special treat of the concert was that everyone was backed up by the fabulous Vince Giordano and the Nighthawks whose period arrangements were played as written from Vince’s amazing collection. He served as co-artistic director along with Peter Yarin as co-music director on piano. The other co-artistic directors were historian Robert Kimball and Klea Blackhurst who also sang and hosted in her charming manner.  The other members of the talented cast were Stephen DeRosa, Erin Dilly, Catherine Russell and Nathaniel Stampley and all smoothly directed by Gary Griffin.

Arlen’s ambition was to be a singer and was hired in 1929 by Vincent Youman’s to sing in his show Great Day. However, fate intervened when he met lyricist Ted Koehler and they began writing songs together. When Ruth Etting introduced “Get Happy” in a short-lived Revue, the team was rocketed to fame and his career as a songwriter was launched. The show opened with the cast singing this lively standard.  Many of Arlen’s hits from the 1930’s came from songs he wrote for the fashionable uptown Cotton Club with Ted Koehler such as “I’ve Got The World on a String” beautifully sung by Erin, the fun “Happy as The Day is Long” sung by Stephen, “Ill Wind” the haunting ballad performed by Catherine Russell along with the standard “Stormy Weather.” Nate’s beautiful voice did justice to “As Long As I Live.”

There were so many hits from that era and most were covered such as the brilliant “It’s Only a Paper Moon” sung by Klea that Arlen wrote with E.Y. Harburg and “Let’s Fall In Love” that Erin sang from the 1934 film of the same name.  Songs from the revue “Life Begins at 8:40” written with Ira Gershwin and E.Y. Harburg was also featured as in the segment with Erin and Stephen “You’re a Builder-Upper,” Let’s Take a Walk Around the Block” and “Fun to be Fooled.”  Catherine’s version of “I Gotta Right To Sing the Blues” was right on as well as Nate’s “Last Night When we Were Young.” Stephen sang a rousing rendition of “Lydia, The Tattooed Lady” that Groucho introduced in the 1939 film At The Circus.

Robert Kimball came on stage to talk about Harold Arlen’s later years when he suffered from depression after the death of his wife Anya in 1970. Arlen died in 1986 at the age of 81. Arlen and Harburg’s masterpiece was the score from the brilliant film The Wizard of Oz that continues to thrill generations today.  “Over The Rainbow” was voted the 20th Century’s best song by MTV. To close, the entire cast sang a medley of songs from that film that continues to bring joy to millions. A popular feature of L & L is the audience sing-a-long and we all joined in to sing, “It’s Only a Paper Moon” as the lyrics flashed upon the screen.  Kudos to everyone involved in paying tribute to this accomplished composer’s early years and whose brilliant melodies will live on forever.

On a Personal Note:

I began The Singing Experience in 1977 and in the beginning the workshop performances were in my home where I had a large living room and a stage.  In the winter of 1980 I put together a show of Arlen songs for my students and invited him to come and amazingly he accepted. Arlen wasn’t feeling particularly well that night and it was a snowy evening, but he did show up and seemed pleased by the songs we had chosen. All I kept thinking was “Harold Arlen is here in my home!”  I had my children, then only 4 and 6, sing a medley of songs from The Wizard of Oz and my daughter said from the stage, “I can’t believe that we are singing in front of the man who wrote the music to my favorite film!” Then we all surrounded Harold Arlen to sing “Over the Rainbow” and he was very moved and in tears.  He thanked me profusely for a wonderful evening and it remains one of the most memorable nights of my life!

The Sensational Songs of Cole Porter

Dorothy Fields and the women of the American Songbook

May 6-8 SONGBOOK CLASSIC BY UNSUNG LYRICISTS

JUNE 3-5 FROM CAMELOT TO CALIFORNIA:

The Worlds of Lerner & Loewe