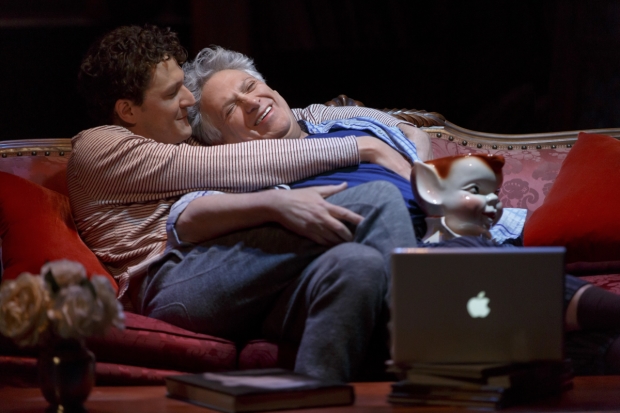 Gabriel Ebert and Harvey Fierstein in “Gently Down the Stream”

The show, directed by Sean Mathias, features the inimitable Harvey Fierstein (who was probably created for this role, if the role was not created for him) as Beau, an aging gay man who tickles the ivories at a piano bar in London. A native of Louisiana (Fierstein’s accent, as noted, is part Brooklyn part bayou), Beau has known many of the great artists of the 20th century, including the cabaret singer, Mabel Mercer. In fact, he was at one time her accompanist.

An online dating site brings Beau a young lawyer, Rufus (Gabriel Ebert), who arrives hoping to have sex and to satisfy his curiosity about the gay demimonde of the sixties. In the end, Rufus is so intrigued he decides to stay.

Set in the Beau’s messy, book-filled London apartment (scenic design by Derek McLane), the play traces the sometimes rocky always poignant relationship the two men develop. Beau knows he is too old for Rufus. He sees the future and it does not look good. Rufus, on the other hand, is filled with youthful optimism, despite his occasional bouts of depression brought on by bipolar disorder. He wants to enjoy the relationship and not worry about the future. He wants to get married.

One of the most telling scenes happens when Beau says let’s talk about children. He means let’s discuss our age difference. Rufus thinks he wants to talk about adopting.

For Rufus, the struggles of gay men are history. He wants Beau to document his life and times on tape. This gives Fierstein the chance to deliver a series of faultless monologues in his foghorn voice, chronicling Beau’s often tragic experiences with other lovers, in other places. But this does not save their relationship.

As the play progresses, it becomes apparent that what really separates the two men is not only age but their different attitudes towards themselves as gay men. Beau is stuck in the days when gay men made the best of living in the closet, and sometimes even basked in living on the fringe. Rufus is convinced he can enjoy a life without trauma.

In addition to impressive writing, what makes Gently down the Stream work is the dramatic chemistry between Fierstein and Ebert. Feinstein lumbers. Ebert dances. When they come together it’s like an elephant and a butterfly – and surprisingly lovely to behold.

Christopher Sears, who makes a late appearance as a performance artist named Harry, adds a new element of charm and normalcy. So that what might be a triangle ends up being a trinity.

Gently Down the Stream runs through May 21 at The Public Theater, 425 Lafayette St., www.publictheater.org.