Like our Bette Davis, she never knew the meaning of holding back. She erupted like Etna, Stromboli, and Vesuvius with unvarnished naturalism, earthy humor, and emotional intensity. When she emoted in breathtaking close ups with tears streaming down her ragged face, there were no dry eyes in theatres. And when trod upon or jilted, her wrath soared through the screen and up into the gods. That and her every-woman quality made her an Italian National Treasure and the symbol of postwar Italian cinema.

Magnani helped introduce the Italian neorealist movement to U.S. audiences. She skyrocketed to superstardom with her indelible turn in Roberto Rossellini’s Rome, Open City.  For U.S. audiences,accustomed to movie-star glamour, she delivered something startlingly new: explosive for cein all its raw, gritty glory naturalism, and emotional intensity. Though she had the ability to move audiences to tears, she was a brilliant comedienne and a competent singer.

In a legendary and illustrious international career, from 1928 and almost until her death in 1973, Magnani gave stellar performances for the top directors of her generation: De Sica, Fellini, Pasolini, Rossellini, Renoir, and Visconti and Americans Cukor. Dieterle, Kramer, Lumet, and Mann. Renoir stated, “Anna Magnani is probably the greatest actress I have ever worked with. She is the complete animal—an animal created completely for the stage and screen.”

Highlights of the 24-film tribute (Italian with subtitles and projected in 35mm except where noted) noted:

1870 (D: Alfredo Giannetti; 1972) – Magnani’s only pairing with Italian great Marcello Mastroianni. In this historical drama, they are caught up in the political upheaval of the Italian unification. Score by incomparable Ennio Morricone. 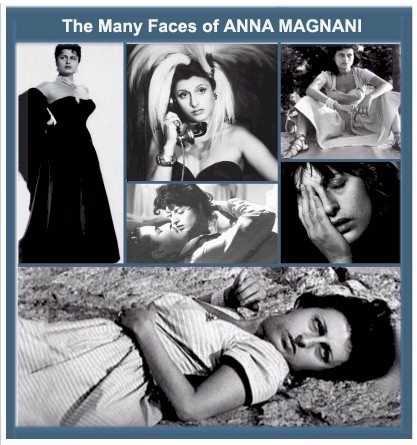 L’amore  (D: Roberto Rossellini; 1948) – The acclaimed neorealist director, mentor and lover to the star, secured two powerhouse performances from Magnani.  “Una Voce Umana / The Human Voice,” is based on a 1930 Cocteau play;  “Il Miracolo / The Miracle,” is written by Rossellini and Federico Fellini. In Part One, Magnani is a jilted lover hanging desperately on the telephone to salvage a relationship [a sequence memorialized in numerous films]; in Part Two,  deemed anti-Catholic and condemned by the Church, “Saint Joseph” (Fellini) rapes and impregnates young Nanni, a peasant who believes she’s the Virgin Mary and is giving birth to Jesus.

The film opened, and due to controversy over “The Miracle,” was pulled. After two years of battles over artistic freedom/free speech and a landmark Supreme Court ruling, “The Miracle” resurfaced — as part of a three-parter. Restored here as originally seen. Magnani won Italy’s Silver Ribbon.

… And the Wild Women / Nella Cuttá l’Inferno (D: Renato Castellani; 1959; Italy/France) – Sparks fly as Magnani plays opposite another Italian cinema legend, Giulietta Masina—in this drama set in a women’s prison. Young Masina is wrongly convicted, with Magnani in an electrifying tour-de-force as a hardened con who corrupts her. Each shine, but Magnani gets the best moments; one such is when she shimmies down a cellblock shouting “rock and roll!”  One of Italian cinema most acclaimed character actors, Renato Salvatori (Rocco and His Brothers, Big Deal on Madonna Street), now mostly forgotten, is featured.

The Bandit (D:Alberto Lattuada; 1946) – Magnani is a fierce femme fatale who ensnares an ex-POW in her crime ring in this shadowy, fatalistic neorealist noir. Veteran director Lattuada (who wrote Variety Lights as well as this film), a pillar of Italian cinema conservation who gave Fellini his first job, imbues this crime saga with a shadowy, foreboding style. A memorable sequence is the nightclub robbery set to a stark drum solo composed by his father Felice.

The Fugitive Kind (D:Sidney Lumet; 1960; U.S.) – Brando meets his match, and they spar! Fire meets fire as Magnani’s sex-starved Lady Torrance, whose husband is dying, ignites strumming drifter Brando, wearing a snazzy snakeskin jacket, in this torrid Tennessee Williams psychodrama, adapted from Orpheus Descending, of lost souls and raging passions. Joanne Woodward simmers. Oscar, Tony winner, and a Williams favorite Maureen Stapleton, who starred as Lady Torrance on Broadway (as she did in The Rose Tattoo), is featured.

Full Speed / Tempo Massimo (D: Mario Mattoli; 1934) – This frenetic, frivolous comic musical charmer is a sparkling example of the Italy’s pre-WWII sophisticated entertainment. Dora, portrayed by Milly, one of Italy’s most treasured singers (and sister of acclaimed Italian nobleman and National Treasure Totò) who went on to star in drama (the drugged, depraved mother in Bertolucci’s The Conformist), TV, clubs, and onstage (including Broadway), falls from heaven via parachute to tempt a forlorn professor, Victorio De Sica (who sings), off his feet. A highlight: the bicycle race. Magnani, in her second credited role, is a vivacious, scheming maid.
If the ending appears familiar it’s what inspired Mike Nichols’ bride-snatching finale in The Graduate.

The Golden Coach / La Carrosse D’or (D:Jean Renoir; 1952; France/Italy) – One of the acclaimed directors’ An exquisite love letter in stunning color to the magic of the theater, which Truffaut called “the noblest and most refined film ever made,” —stars Magnani as a performer in a commedia dell’arte troupe traveling through 18th-century Peru. She’s torn between three lovers, one of whom woos her with the gift of a gold coach. The score features selections from Vivaldi.

Mamma Roma (D:Pier Paolo Pasolini; 1962) – In one of her defining roles, Magnani is a coarse ex-streetwalker who strives for a better life by buying a fruit stand to build a better life for her son. This landmark film, which pushed neorealism in a bold new direction, is a shattering working-class tragedy. With a subversive mix of the sacred and the profane, it’s pure Pasolini. Venice Film Festival nomination for the director and a Best Actress win for Magnani.

The Peddler and the Lady / Campo de’ Fiori (D: Mario Bonnard; 1943) – In the first of her earthy everywoman roles, Magnani is a brash fruit seller in Rome’s famed Campo de’ Fiori marketplace who pulls a humble fishmonger, Rome, Open City’s Aldo Fabrizi, back down to earth only to entangle him in romance way out of his league. Great chemistry between Magnani and Fabrizi, which nets a nimble balance humor and heartstring-plucking poignancy.

Rome, Open City (D: Roberto Rossellini; 1945) – Classic introducing Italian neorealism and Magnani as major forces in international cinema, is a devastating look by the legendary director at life in Nazi-occupied Rome as a resistance leader (Marcello Pgliero) seeks refuge and the help of pregnant war widow, Magnani, who’s about to marry. The film, especially its devastating ending, sent worldwide shock waves through the world. More than 70 years later, it retains its power. Aldo Fabrizi (The Peddler and the Lady) is the priest. Oscar-nominated screenplay. Grand Prize at Cannes.

The Rose Tattoo (D: Daniel Mann; 1955; USA) – In her first U.S. film, Magnani , as Tennessee Williams’ New Orleans seamstress Serafina, seethes with fiery emotion and dramatic fireworks – which won her the Best Actress Oscar, after her truck driver smuggler husband with that chest tattoo desserts her. She meets handsome truck driver, Burt Lancaster [looking not at all Italian] as she’s deals with the sexual awakening of her daughter (Marisa Pavan). Jo Van Fleet, a year prior to winning her East of Eden Oscar, has a showy confrontation with Serafina.

The Secret of Santa Vittoria (D: Stanley Kramer; 1969; USA) – Satire, adapted from Robert Crichton novel, of Italian life under WWII Nazi occupation. Magnani is the strong-willed wife of bumbling town drunk (Anthony Quinn, their second pairing), who becomes mayor and scrambles to hide a million bottles of vino. Virna Lisi and Sergio Franchi are featured. Ernest Gold’s score was Oscar-nominated. Golden Globe Best Picture/Comedy or Musical, with a nod to Magnani for Best Actress. Kramer was often referee between Magnani and Quinn, who grew to despise each other.

Tre Donne – La Sciantosa (D: Alfredo Giannetti; 1971 TV movie) – Magnani dazzles in the tour-de-force role of a washed-up cabaret star on WWI front lines. Her status as the living symbol of her country is concretized in her powerful, tear-stained rendition of a  Neapolitan ballad. Score by Ennio Morricone.

Volcano (William Dieterle; 1950) – A blend of raw neorealism, violence, and romantic trysts and twists. Magnani, a prostitute banished from Naples by police to a volcanic island (Salina, off Sicily) of her youth, erupts with the explosive lava of a woman scorned. Under veteran Oscar-nominee Dieterie (Life of Emile Zola, Juarez, Hunchback of Notre Dame, Kismet, Portrait of Jenny, many later films in native Germany) this was Magnani’s answer to ex-lover Roberto Rossellini’s Stromboli [being shot nearby], starring his new love, Ingrid Bergman. Memorable volcanic ending. Co-starring Rossana Brazzi as the much-desired deep-sea diver; and Geraldine Brooks as Magnani’s sister. Heavily censored for U.S., and finally released here in 1953. The 2012 War of the Volcanoes was an Italian documentary about the filming of Volcano and Stromboli.

Wild Is the Wind (D: George Cukor, 1957; USA; 16mm) – This torrid tale of lust and betrayal, based on the novel by Nino Novarese [sanitized for the screen], plays out against the backdrop of Nevada’s great outdoors. Magnani (Oscar nod) is the explosive second wife, ignored by the jealously of immigrant rancher, Anthony Quinn (Oscar nod), who takes for her lover, Anthony Franciosa (fourth film and immediately after his Oscar nod for A Hatful of Rain. Score by legendary Dimitri Tiomkin. Magnani sings! Title song, lyrics by Ned Washington, was Oscar-nominated. Magnani and Quinn tangled with Cukor. Dolores Hart, then 19, is featured.

La Magnani is organized by Florence Almozini and Dan Sullivan, the Film Society; and by Camilla Cormanni and Paola Ruggiero, Luce Cinecittà. The series is presented in association with the Ministry of Culture of Italy.​

Admission for La Magnani is $14, $9 FSLC member; $11 seniors/students. Save with a 3+ Film Package and the $125 All Access Pass. Purchase at www.fslc.org and Walter Reade box office. For more information on the films and screening schedule, visit the website.