July 8, 2021: It’s appropriate that the first indoor production with live actors I’m reviewing since the COVID pandemic shut down all NYC stages over a year ago is a celebration of theater and how it can heal communities and create families. E. Dale Smith’s Fruma-Sarah (Waiting in the Wings) is such a celebration but this backstage comedy is flawed, and somewhat forced. Fortunately, that prickly comedienne Jackie Hoffman makes it fly. 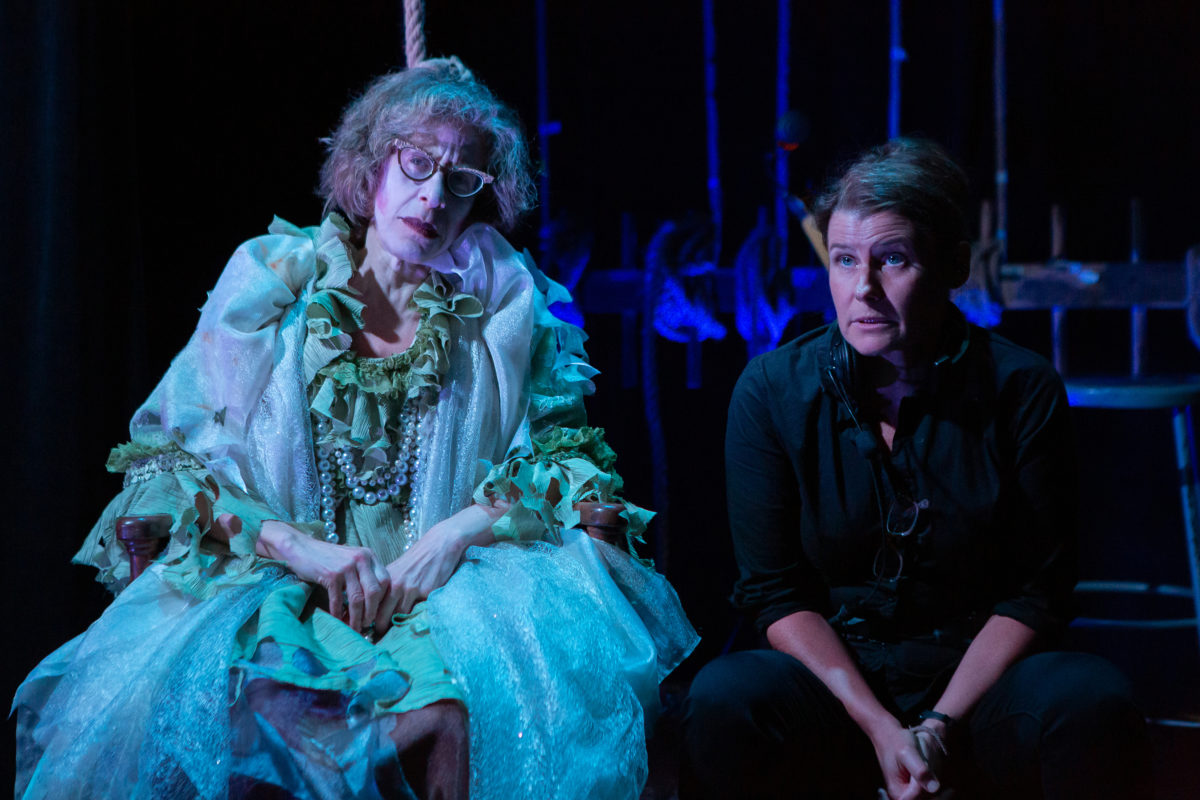 July 8, 2021: It’s appropriate that the first indoor production with live actors I’m reviewing since the COVID pandemic shut down all NYC stages over a year ago is a celebration of theater and how it can heal communities and create families. E. Dale Smith’s Fruma-Sarah (Waiting in the Wings) is such a celebration but this backstage comedy is flawed, and somewhat forced. Fortunately, that prickly comedienne Jackie Hoffman makes it fly.

As indicated by the title, this tidy little sketch focuses on the flying ghost conjured up by Tevye the hero of the beloved musical Fiddler on the Roof, or rather, the actress playing her in a community theater production in suburban New Jersey. Ariana Russo is depressed, alcoholic, and isolated with a gay ex-husband, an alienated daughter, and a nowhere real estate job. But she’s also got a quick tongue and a razor-sharp wit. While waiting for her entrance for her brief role in the dream sequence, she pours her heart out to Margo, the replacement fly-rigging operator, in between sips from a flask. Margo has issues of her own including a rebellious teenage son and an attractive offer for a touring stage manager job, at the risk of losing her secure office gig.

This intimate two-hander’s 75 minutes is mostly taken up with Ariana grousing about her poor life choices and the dwindling size of her parts in the community theater, the only source of joy in an otherwise dreary existence. There are also several funny cracks which will be hilarious to theater people but will probably produce head scratching among civilians. For instance, the avant-garde director of this Fiddler has cast the Jewish peasants as contemporary urban hipsters and the oppressive Russian cossacks as Trump supporters. The company’s next show is the teen musical Assassins Junior, followed by the children’s musical Goldilocks Behind Bars (“It is cute! It’s like Mother Goose Meets Orange Is the New Black without all the lesbian stuff,” announces the group’s artistic director at the top of the show.) Smith’s script is peppered with such inside-baseball jibes, but too much of the remainder of the show is taken up with overly familiar soap operatics. Ariana even goes so far as to attempt to strangle herself with the flying rope. We’re also led to believe Ariana and Margo would be having a full-volume heart-to-heart only inches for a performance.

Luckily, grudge collector Ariana is played by the mistress of misery, Jackie Hoffman, whose perfect timing and expert sneer have enlivened the FX mini-series Feud, Broadway musicals like Hairspray, On the Town, and Charlie and the Chocolate Factory, and even an under-five walk-on in the movie Birdman. With her constant kvetching, Ariana could have easier turned into a bore, but Hoffman emphasizes Ariana’s slashing wit and her fun side, playing down the melodramatics. Her performance is a tour de force of bitchery, yet she also conveys Ariana’s desperate loneliness without indulging in self-pity. As Margo, Kelly Kinsella has the difficult task of playing straight woman and feeding cues to Hoffman. But she manages to maintain an even-handed authority and create a credible through-line for her character—Get Ariana under control and get this show on the road with a minimum of damage. Braden M. Burns is credited with “original concept and direction” and instills the right balance and pace to keep the action variable in Rodrigo Escalante’s tiny backstage set tucked into the postage-stamp-sized cell theater. Bobby Goodrich created the garish, ghostly costume for Fruma-Sarah.

This may not be the wham-bang extravaganza to mark the return to live theater, but it’s light summer fun and good for a pleasant giggle.