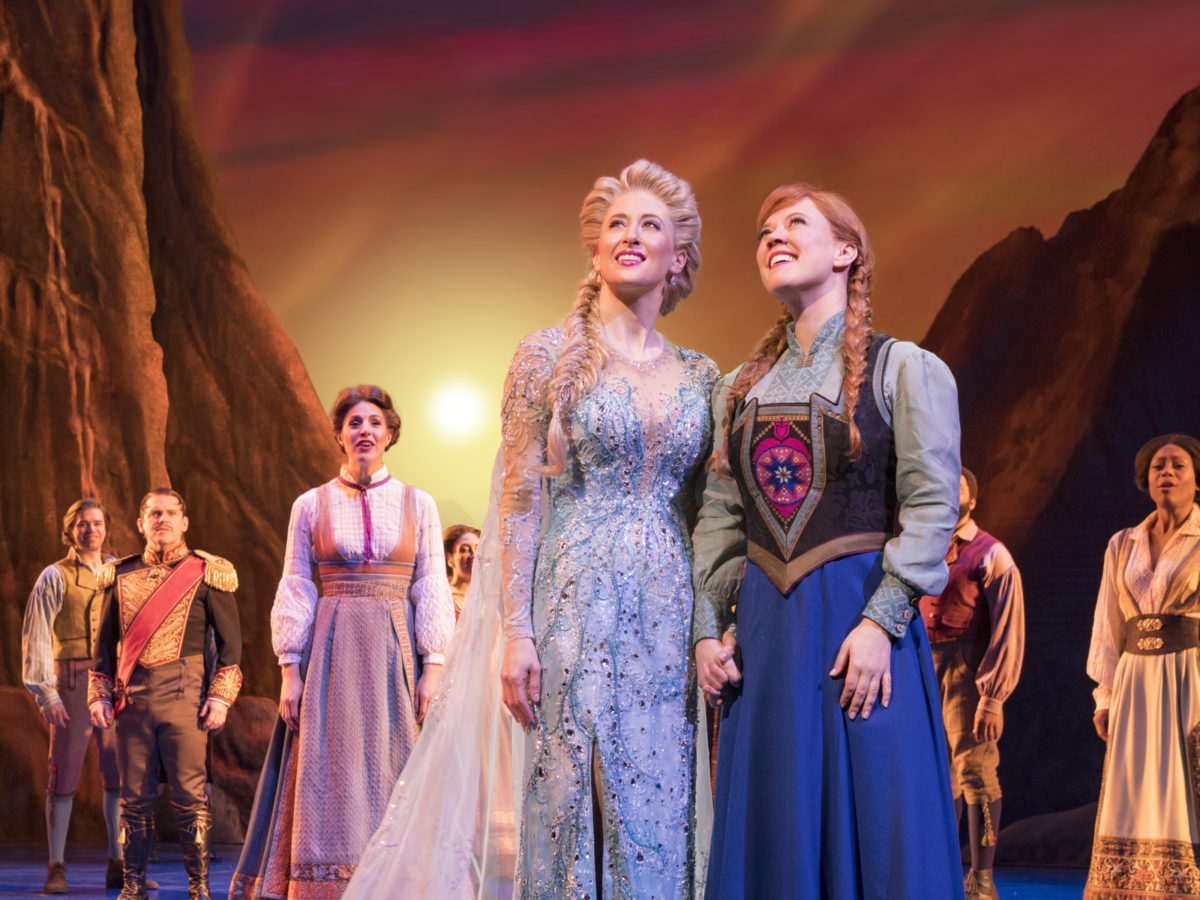 Caissie Levy as Elsa, Patti Murin as Anna and the cast of “Frozen”

Though it’s difficult to imagine how certain feats could have been accomplished by director Michael Grandage (but on a Disney budget, isn’t anything possible?), it’s sad to see cherished components abbreviated, altered and eliminated, such as the talking boulder trolls (now dark, Norwegian, cavemen-like Hidden Folk) and the snow giant Marshmallow, who sadly didn’t survive edits. Instead, audiences are offered many ballads that emphasize backstory (“Hans of the Southern Isles”) and inner turmoil (“Monster,” “True Love”). Effective, yes. Engaging? Not really.

Surprisingly, it’s Kristen Anderson-Lopez and Robert Lopez’s more superficial new numbers that instill a sense of uplifting magic that is needed in this darker take on the film. It’s pure joy witnessing Anna (Patti Murin) and Kristoff (Jelani Alladin) literally fall for one another high above the stage on one of Christopher Oram’s stunning set pieces in “What Do You Know About Love?” Though Act II’s opener, “Hygge,” is in no way integral to Frozen, Kevin Del Aguila’s comical delivery of outpost owner Oaken’s ditty about the Danish term for unwinding in long winters is certainly fitting and memorable in its show-stopping humor.

Any qualms that might be had over the music can be forgiven upon experiencing other key magical moments of the theatre. Sven, Kristoff’s lovable reindeer, is brought to life so realistically by Andrew Pirozzi (and at certain performances by Adam Jepsen) that at one performance a 6 year-old could be heard inquiring as to whether or not it was a real animal. It may not be an actual mammal, but the puppetry from designer Michael Curry is certainly a breathtaking beast of a character in and of itself. Olaf, played with great adorability by Greg Hildreth, is less of a trick for the eye than the wonder that is Sven, but the puppet, maneuvered and brought to life by the seasoned actor, is warm, fuzzy and functional in its intricate design. It’s only a shame that Olaf was not given a new number for his Broadway debut. Sadly, Weselton suffers the same fate; portrayed by theatre’s brilliantly versatile Robert Creighton, the character with the famously silly name and small stature is ironically given far too little stage time. He too should have enjoyed his own song and dance.

Caissie Levy provides little soul for Elsa, who performs her huge Act I closer, “Let It Go” with arms raised theatrically high, reaching for heights at which her notes will never quite  hit in strength. (Note: The icy projections that lazily follow her gestures are also a slight disappointment when it comes to spectacle, a detriment to Levy’s already lackluster delivery.) However, everything else about this Elsa is enchanting. It would be impossible to find an audience member, young or old, who is not blown away when Elsa’s gown transforms with the blink of an eye. Costume designer Oram also chooses to have Elsa ditch a dress for the latter part of Act II, proving a heroine can wear pants. Patti Murin is the true star in the universe of Arendelle; the actress is congenial when she is demonstrating Anna’s hopefulness, and delightful as she flirts naively with Hans (in a courtship that takes cleverly mature turns). Murin embodies a well-rounded Anna, more so than her two-dimensional, animated counterpart. Alladin’s Kristoff and John Riddle’s Hans are uninteresting. “Fixer Upper” contains so much humor, much of which is lost in Alladin’s ordinary delivery. The crowd cheers a bit too loudly when Anna finally punches Hans in the face at the end of Act II.

As a package, Frozen is enjoyable. Audiences are going to pay exorbitant prices for the hottest seats since Hamilton because they want spectacle. Luckily, they will be getting it in the beauty of the giant icicles thrusting from the center of the stage. They will be getting it when Elsa accidentally attacks Anna in fits of emotion, sending captivated audiences into a startled sense of awe. They will be getting it with Rob Ashford’s intricately choreographed dance numbers (even if some of them lose a bit of poignancy due to Natasha Katz’s somewhat dark lighting design). They will be getting what they paid for when they take part in the excitement of seeing their favorite characters and story come to life. Frozen theatergoers are willing to take any of the musical’s theatrical missteps and, well…let them go.