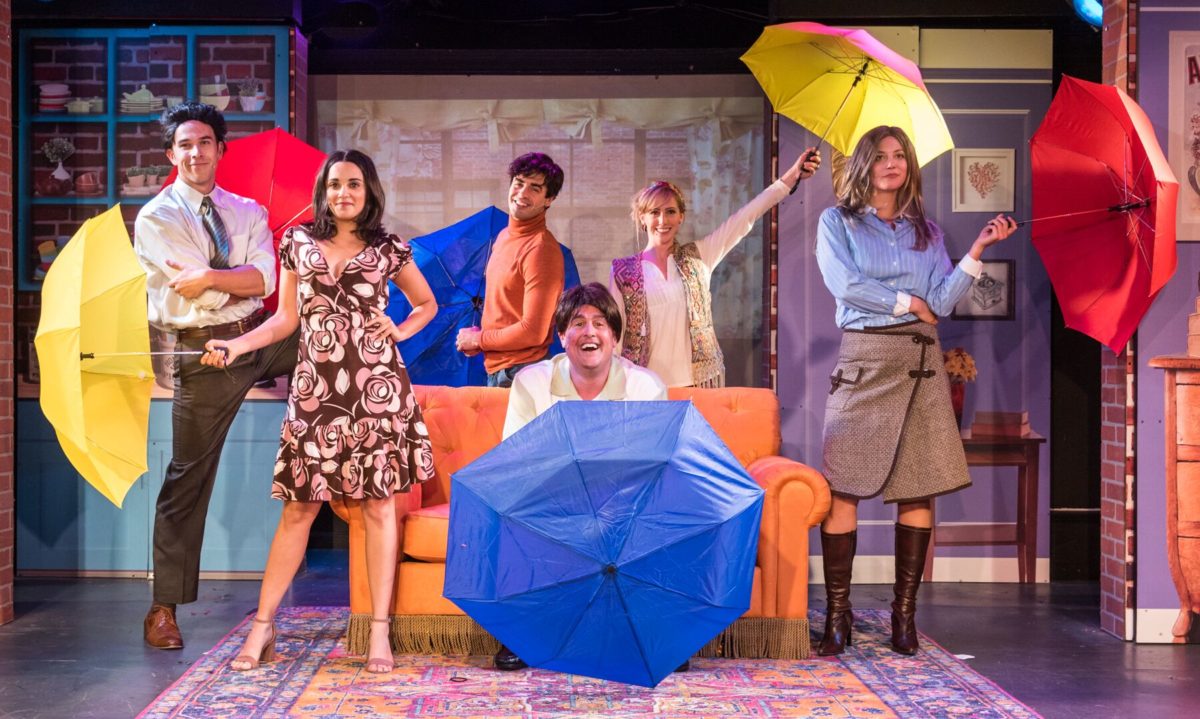 There is so much material from which to pull that one might think the musical would get mired down in its attempts to cover such emblematic plot points as Ross and Rachel’s eponymous “break,” Monica and Rachel’s egregiously unexplained palace of an apartment, and the iconic Central Perk, the coffee-shop home to platinum blonde Gunther (played here with great aplomb by co-writer Bob McSmith), giant coffee cups, and Phoebe’s terrible songs; this lampoon proves doubters wrong. The show’s greatest attribute is its ability to hit on series favorites quickly and memorably, with every jab impressionable and accessible to each member of the audience. For the most part, the McSmith team smartly stayed away from creating a cloying, original plotline for the musical, instead choosing to focus on the wealth of spoofable moments at their fingertips. That being said, this is no recreation of a sitcom; Friends! is a cleverly precise poke at what made the show’s comedy so funny in the first place. With fast, smart lyrics such as, “What a classic sitcom situation, manipulation and flirtation, all from miscommunication, leading to anger and frustration,” the McSmiths move the piece along far less haphazardly than Rachel, Ross and Chandler trying to move a couch.

Director Paul Stancato’s direction and choreography with an enormously energetic group of actors in Josh Iacovelli’s terrifically designed space is smart and intuitive. His performers are aces at impressions, enunciating the best and worst of characters in stupendously hysterical ways. Landon Zwick’s Ross is a spectacular standout, relaying every cock of the head and doofish “Come on guys!” with flawless inflection and humor. Seth Blum, the hardest working McSmith show-stopper since taking on Tori (Bayside! The Musical), Kimmy Gibler (Full House! The Musical) and Andrea Zuckerman (90210! The Musical), amongst dozens of other characters, now plays quadruple-plus duty again as Chandler, nasal nutcase Janice, and a slew of other famous guests that are better left a surprise. If there is one number not to miss on the New York stage this season, it is “Oh. My God. It’s Janice,” a rip-roaring rap that would be reckless in anyone but Blum’s hands. His mastery of asinine, go-for broke comedy is so original and gut-busting that it will someday be thought of in the same vein as physical comedy greats Steve Martin, Jim Carrey and Rodney Dangerfield. Patricia Sabulis’ Rachel is undeniably expert, getting every one of her exquisite hair flips and “Aw huns!” exactly right. Joey’s “How You Doin’?” (not just a pick-up line, but an entire number about how to pick up chicks) is perfectly sleazy and oafish in Alan Trinca’s hands and eyes (the actors’ brows are so engaging they should be given their own billing in the program). Katie Johantgen is fun as she makes much of clueless Phoebe, waving her hands listlessly in the air, while the humor in Monica is in the riffs written about her character, and not so much in Lisa Graye’s forgettable portrayal of her.

Perhaps one of the most delightful aspects of Friends! is how it magnifies inane aspects of the series that many audiences didn’t perceive as parodic. In hindsight, of course these aspects of the show were ridiculous, and the McSmiths bring you in on the jokes that were certainly not at the forefront of the series. Though Assaf Gleizner’s music is a bit forgettable, the lyrics accompanying it will leave their mark. Was the fact that Phoebe was carrying her brother’s babies incestuous? Did Joey get dumber as the series progressed? Was it obvious to the rest of the world that Carol was a lesbian…and that her name being Carol should have been our first hint? Was Rachel ever allowed to eat? Why didn’t these characters ever have to pay for their coffee at Central Perk? There are no answers provided here, but the questions sure are hysterical.

There are so many reasons to catch this spitfire of a show. See it to imagine how Joey’s pet duck and chick turn out to be demonic emissaries. See it to marvel at Monica’s fat suit one more time. See it to admire the replicas of the sextet’s attire in the pilot (for which costume designer David Rigler did a swell job). See it to laugh at how the writers manage to allude to “Smelly Cat” without having Phoebe actually sing it (a fun twist brings copyright infringement in on the joke). See it because when it hasn’t been your day, your week, your month or even your year, Friends! The Musical Parody will make you laugh so hard your face will hurt, your eyes will tear, and you’ll be ready to come back and see it over and over again.