The interplay of childhood fantasy and harsh adult reality is the subject of two current Off-Broadway plays. Sarah Ruhl’s To Peter Pan on Her 70th Birthday at Playwrights Horizons is a melancholy meditation on death, age, and the constant cycle of life while Frederick Stroppel’s Small World at 59E59 Theaters is a shallow sketch attempting to address big themes but producing only occasional chuckles and mild nods of recognition. 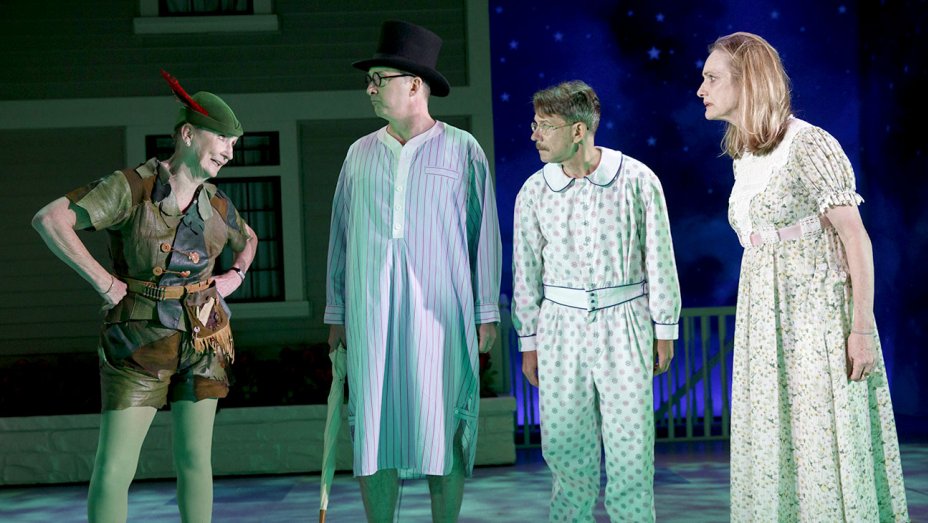 The interplay of childhood fantasy and harsh adult reality is the subject of two current Off-Broadway plays. Sarah Ruhl’s For Peter Pan on Her 70th Birthday at Playwrights Horizons is a melancholy meditation on death, age, and the constant cycle of life while Frederick Stroppel’s Small World at 59E59 Theaters is a shallow sketch attempting to address big themes but producing only occasional chuckles and mild nods of recognition.

Both works have flaws, but Ruhl’s is a vivd tapestry of a family undergoing universal changes. This weird play centers on Ann and her four late-middle-aged siblings as they deal with their father’s death. Like Ruhl’s own mother, Ann played the Boy Who Wouldn’t Grow Up in a community theater production in the 1950s Davenport, Iowa, and she fondly recalls her theatrical flights to Never Land as she contemplates mortality. The structure is unconventional to say the least. We open with Ann addressing the audience reminiscing (Kathleen Chalfant is delightfully endearing here, reliving Ann’s teenage triumph as Peter and getting to meet Mary Martin, the actress forever identified with the role.) She hints there is some trouble in her life and then the curtain part to reveal David Zinn’s charming set combining a hospital room and the family home. The unnamed father is tied to a jungle of tubes and wires and the five almost-elderly children are seated in a row. In a long, protracted sequence full of naturalistic pauses and small talk, Ann, her sister Wendy and brothers John, Jim, and Michael discuss family history, politics, and their joys and regrets.

Then Ruhl takes a wild left turn from this painfully naturalistic milieu and we head off for Never Land with Ann donning her green tights, the arch-conservative Jim camping it up as Captain Hook and the remaining sibs cavorting in pajamas as the Darling kiddies. The symbolism is pretty heavy (“Captain Hook is Death! Kill Death,” cries Ann-as-Peter during a pretend battle) and the Never Land segment runs out of steam before it finishes, but Ruhl still paints a heartbreaking and insightful portrait of adult passages. Les Waters, who also staged the play at the Actors Theater of Louisville’s Humana Festival, skillfully balances the disparate styles. A compassionate cast led by the exquisite Chalfant as Anna and Lisa Emery as Wendy establish Ruhl’s duality of detailed naturalism and metaphor-laden dreamscape. The pain of enduring change and facing maturity’s burdens are feelingly rendered. Chalfant’s brief monologue describing the death of the family dog is so real, I was almost in tears when the canine (played by the marvelous Macy) actually appears as a ghost-memory.

Peter Pan was one of many iconic childhood characters brought to animated life by Walt Disney and Frederick Stroppel takes us behind the scenes at the great cartoonist’s dream factory in the slight two-hander Small World at 59e59 Theaters. The premise is intriguing: Disney is meeting with legendary Russian composer Igor Stravinsky to discuss adapting the latter’s masterwork The Rite of Spring for the groundbreaking feature Fantasia (1940). The expected high-art-versus-pop-culture arguments erupt as Stravinsky rails at Disney for rearranging his score and employing battling dinosaurs rather than his original plot of Slavic tribes sacrificing a maiden. In the second scene, the roles are reversed and the Russian composer has gone completely Hollywood and attempts to persuade the financially-strapped studio head to film his opera based on the Faust legend (it later becomes his stage work The Rake’s Progress.) The final meeting in this 80-minute work takes place in heaven where the two meet for a final collaboration. Stephen D’Ambrose (Stravinsky) and Mark Shannan (Disney) give competent impersonations of the great figures and Joe Brancato delivers a neat staging, but there’s nothing new here. Deep art doesn’t sell as well as pleasant cartoons. Geniuses can be temperamental bastards. Quel surprise!

Ruhl’s Peter Pan isn’t bursting with startling new insights either (Growing old sucks!Again, not a news flash). But it’s presented with commitment and compassion, and soars above the pedestrian Small World.

Originaly Published on ArtsinNY on September 26, 2017