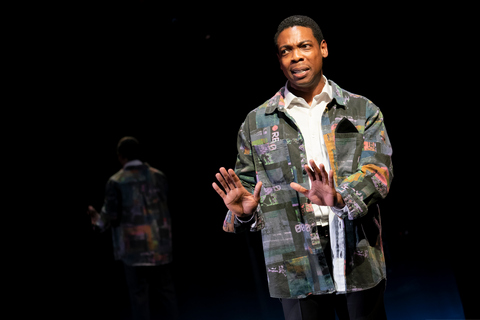 Currently at the Signature Theatre, her early work Fires in The Mirror (1992), is getting a noteworthy revival. It’s significant, among other reasons, because it’s the first major production of Smith’s work in which she doesn’t appear. In her stead, the gifted, and charismatic actor Michael Benjamin Washington transforms into the 20-plus characters she interviewed for this piece. To watch the show with another actor playing these roles validates her depth as the creator and writer.

About the 1991 incident in Crown Heights, Brooklyn, this docudrama recounts that a Hasidic man driving a car, jumped the curb, murdering a young African American boy, and injuring his sister. In the violent clash that ensued journalists were beaten by cops, and blacks. Finally, a visiting rabbinical student stabbed to death by black youths, exacerbated the already tense racial atmosphere in the city. Fueling the rage, were rumors that the Hasidim involved in the car accident were given medical attention before the black children.

Beyond mere reportage, Smith’s docudrama delves into the search for identity in the black community. Here an adorable teenage girl tells us how she knows she’s black. So, do Al Sharpton, and George C. Wolfe.

Washington creates these quick character sketches through his deftness with psychological gesture. With one hand, his young African American girl bites off a white girl’s affect by touching her hair. And his portrayal of Angela Davis resonates with supreme authority, and stillness.  None of these characters would live fully, however, were it not for Washington’s strong voice, his range, and impressive diction.

He is especially resonant portraying a character with whom he has visibly less in common, the feminist journalist, Letty Pogrebin.  Her commentary also speaks to the play’s message most directly. “I think it’s about rank frustration,” she opines loudly, confidently, “the old story that you pick a scapegoat/ that’s much more, I mean Jews and Blacks, / that’s manageable, / because we’re near, / we’re still near enough to each other to reach! / I mean, what can you do about the people who voted for David Duke? / Are Blacks going to go there and deal with that?”

Indeed, Fire is an affecting emotional drama, and one that stands as dramatic testimony to America’s ongoing racial tensions. Through Washington’s mastery of the piece, we’re moved to notice how impactful Smith’s stylistic innovations are.

Clearly, her work has influenced some remarkable theater pieces, Moises Kaufman’s, The Laramie Project among them. Along withLynn Nottage’s Pulitzer Prize winning dramas, Ruined, and Sweat.