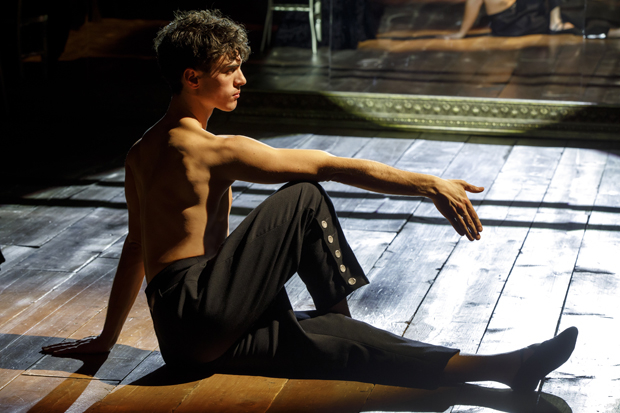 At the center of the drama, stands an unruly, narcissistic, cruel and egotistical man, Sergei Pavlovich Diaghilev (Douglas Hodge), the impresario who created Ballet Russes. Through his love affairs with his much younger lead dancers, Nijinsky (James Cusati-Moyer) and later Leonide Massine (Jay Armstrong Johnson) we learn about his artistry, and sense of showmanship, as well as his personal demons.

In light of recent revelations, however, the scenes of doting affection between the master and his young dancers, come across as fodder for #metoo and #timesup. In that regard, Diaghilev appears just as exploitative as Harvey Weinstein, or Kevin Spacey.

Clearly, McNally has been kinder to his protagonists in earlier works. Think what you may about the caustic character of Maria Callas in his play, Master Class, but the diva still basks in the light of the writer’s admiration, and respect. Certainly, the historical characters in his musical Ragtime achieve saintliness, regardless of their flaws. And watching Chita Rivera in The Dancer’s Life is like reaching heaven.

But Hodge’s Diaghilev is something of an outcast to the world of civil behavior. One would have liked to see him in an orange comb over (J. Jared Janas, designer) to ease our pain in observing his discoveries. Be that as it may, there is little here to redeem the ballet master.

Directed by John Doyle, the young dancers come to life in a vivid way. More than merely beautiful to look at, Cusati-Moyer as Nijinsky and Johnson as Massine, plumb the depths of their own prostitution with intense objectivity.

Bringing Hodge, the 2010 Tony Award-winning star of La Cage Aux Folles, back to the New York stage is a gift to audiences. His showmanship is the spectacle around which this production is built.

That Marsha Mason portrays Diaghelev’s maid, is something of a comic footnote, given her popularity as a screen idol. But then everyone is a small player next to the ballet master. Indeed, both John Glover (Dima), and Marin Mazzie (Misia) cope well as window dressing for Diaghelev’s demagoguery.

John Doyle and David L. Arsenault’s scenic design with two enormous gold framed mirrors, are succinct statements about art, and how we see ourselves. Although sometimes, as we see here, it can be quite distorted.

X, or Betty Shabazz vs The Nation

Staged as a courtroom drama, Marcus Gardley’s historical play reenacts the assassination of Malcom X – the events that led to it, and the motives behind it.  The action is framed by a narrator, Bootblack (William Sturdivant), who also portrays Elijah Muhammad. In the hands of Sturdivant, however, that transformation is so complete that we don’t recognize the actor from one role to the next.

Sturdivant’s Elijah, the leader of the Nation of Islam, appears as a physically crooked character. Bent over a cane, he makes his way to the courtroom stage. As presented here, he is ultimately the man responsible for the murder of Malcolm X.

Adeptly directed by Ian Belknap, the production brings the key issues surrounding the political assassination, into focus.  It elucidates Malcom’s trajectory, focusing on his role as a loyal minister of the Nation of Islam, and finally his defection, and subsequent demise.

Among the highlights, Malcolm’s belief that President Kennedy’s “murder was a reaction to the climate of hate in this country” elucidates the nature of the conflict between Malcom’s emerging beliefs and the Nation of Islam. Fundamentally, that conflict was about the civil rights movement, which Malcolm came to embrace. Indeed, it was he who opined that it was racism, and not the white race, that was the problem.

But the beauty of this production is in the portrayal of these historical events in a fashion that demonstrates the influence of classical Greek drama. Flagging the audience with “applause” signs, and engaging us as judge and jury, we become live participants in the ongoing events.

More importantly, the political goings on are filtered through the personal motives of these historical characters, as well as some fictional ones. To that end, the Nation of Islam would have us believe that Malcolm was the victim of his own hubris.

But what is on trial here is more than an assassination. Indeed, the production asks us to weigh the challenges of governing. Overreaching as well as the realities of political timing are on trial here, too. And so are matters of violence, loyalty, racial strife, and political conviction.

An absolutely brilliant ensemble of actors carries the show. In addition, to Jimonn Cole as Malcom X, Joshua David Robinson as his body guard and double timing best friend is remarkable. As Betty Shabazz, Rosyln Ruff perseveres as Malcolm’s loyal wife, in spite of his obvious infidelities.

The minimalist black set, by Lee Savage, is an open arena which morphs from court room, to Malcolm’s home, to his room in the Shepheard Hotel in Cairo, to the scene of the crime. Byron Easley’s choreography, with the actors’ pounding feet in the stadium, makes a powerful statement.

Celebrating the legacy of Malcolm X, who was murdered on February 21, 1965, this production by the Acting Company at St Clements runs through February 25th.