March 9, 2019: Broadway producer turned playwright Kathleen K. Johnson’s Fiercely Independent, now at the Soho Playhouse,is a mundane drama of marital discord. Something of a defanged Strindberg (or Albee) exercise, with its venom drained and its character insights and local color washed away, it’s set in a conventional hotel room (designed by William E. Cotton, who also did the lights), equipped with twin beds. 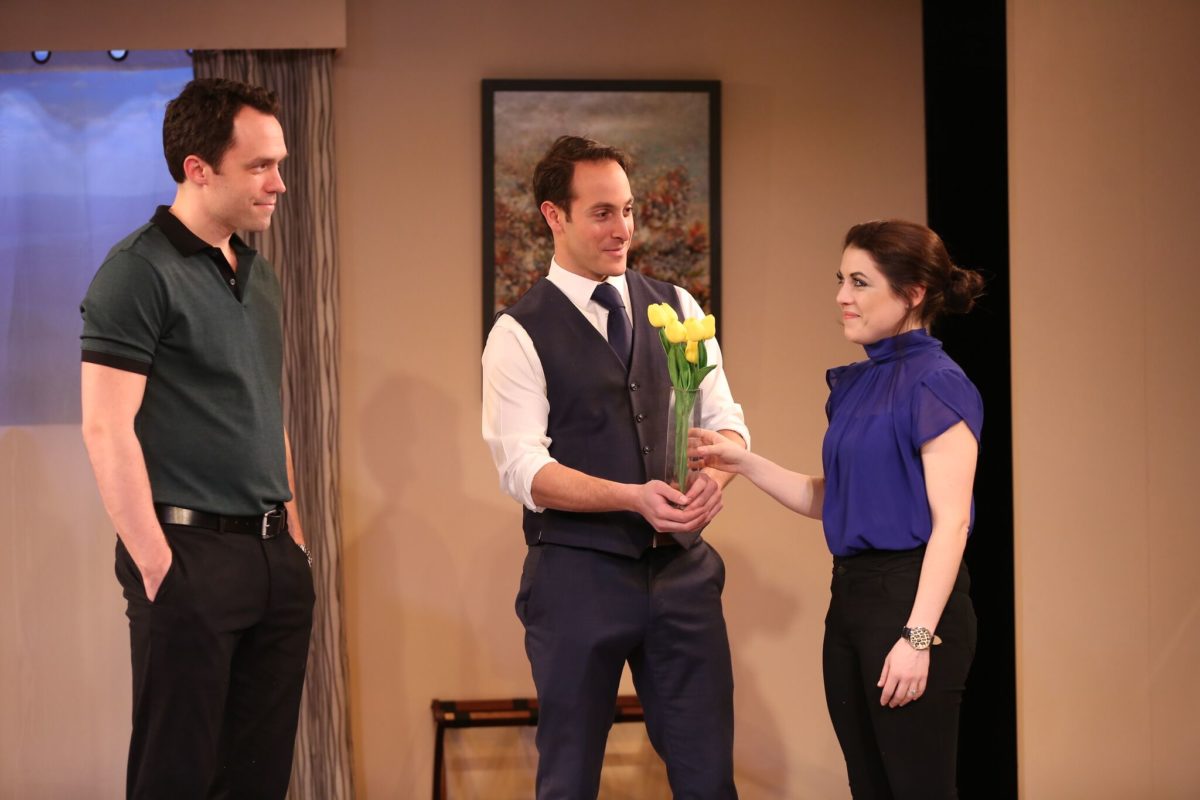 March 9, 2019: Broadway producer turned playwright Kathleen K. Johnson’s Fiercely Independent, now at the Soho Playhouse,is a mundane drama of marital discord. Something of a defanged Strindberg (or Albee) exercise, with its venom drained and its character insights and local color washed away, it’s set in a conventional hotel room (designed by William E. Cotton, who also did the lights), equipped with twin beds.

Apart from the occasional appearance of a hotel employee (Jordan Sobel, making good use of his brief appearances), this is a two-hander about a couple in their 30s, Julie and Robert, who’ve agreed to spend 24 hours in a last-ditch attempt to prevent their four-year-old marriage from dissolving. The idea of their DIY therapy session, in which Robert is present against his will, is Julie’s. Their indeterminate back and forth experience is marked by his saying at one point he doesn’t want out, at another that he does.

As played here, Julie (Caitlyn Gallogly) is a feisty, Tinkerbell-cute sprite, nearly two heads shorter than the tall, Hank Fonda-like Robert (Christopher M. Smith). He’s a hardworking businessman, disappointed in not having achieved his career goals. No mention, though, is made of what it is he or Julie (who appears not to have a job) do for a living.

They’ve agreed on 10 rules of engagement, such as the negative ones of no phones, texting, TV, alcohol, violence, hurtful language, and the positive ones of being honest, talking through their problems, and coming to a decision. This, of course, makes you ponder just which rules will be broken before their time is up. Music, by the way, is not on the list, allowing for the radio to play a romantic number by Andrew David Sotomayor sung by George Bugatti.

Quickly, we learn that Julie has a playful, comic nature, which contrasts with Robert’s serious, even morose attitude. If one had to score their conflict, we’d probably favor the more amenable Julie over the impatient, uptight, self-involved Robert. In fact, the play’s first dispute arises because her cute behavior—which you’d think any normal guy would welcome—embarrasses him. Instead, Julie has to justify her sense of humor. “Jerks!” go the strings of your heart.

And so it goes, as they struggle to uncover the source of their mutual unhappiness, thereby inspiring one arbitrary disagreement and momentary resolution after another. Little is believable, absorbing, or, what might have made it all worthwhile, funny. Ah, for the days of “The [Bickering] Bickersons.”

As the mercifully brief, 70-minute play advances, the actors—attractive, capable, and worthy of better material (she especially)—do their best to wring some life from their clichéd lines and situations. Johnson, acting as her own director, doesn’t do them any favors. Even when their voices are raised, the sparks of honest anger, frustration, and despair never catch fire. Anyone who’s been in a longtime relationship (I’ve been married for 56 years) knows how blazing hot such things can get.

When the play practically stops so the temporarily reconciled couple can play—with nicely naturalistic ease—an overly extended card game of “Great Lines from Great Movies” (I got them all!), or when they find one another too irresistible to avoid the inevitable, it’s hard not to wonder what the hell, other than a playwright’s noodling, has brought this otherwise attractive couple to the brink. Maybe a session with a couple’s therapist would have been a better idea.

Johnson is unable to inject tension or a sense of dramatic progress into the action, which is broken up into a sequence of scenes, each of which ends in a soft, indeterminate, rather than sharp or climactic way, as the lights slowly go to black before rising again. Whatever the final scene of Fiercely Independent may mean for these bland characters, it means for the audience that they can finally exercise their own fierce independence by departing.