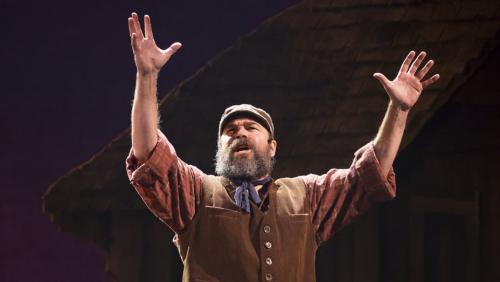 Two heretofore supporting players take the center spotlight in musical revivals with varying results. Danny Burstein, a five-time Tony nominee in featured or costarring roles, finally gets to carry a show in Bartlett Sher’s intensely moving reinvention of Fiddler on the Roof, and Jackie Hoffman, a wildly funny second banana in such productions as Hairspray, The Addams Family, and On the Town, is thrown off-balance in Once Upon a Mattress.

Fiddler is best known as a vehicle for whoever plays Tevye, the downtrodden Jewish milkman struggling with anti-Semitism and challenges to tradition in Tsarist Russia. I was too young to see Zero Mostel in the 1964 original but his gigantic personality overwhelms the original cast recording my family listened to constantly. A miscast Alfred Molina dominated David Leveaux’s beautiful but passionless 2004 revival. In Sher’s tenderly understated staging, Burstein makes Tevye a human-sized individual coping with the irresistible tide of history rather than a larger-than-life force of nature wrestling with God and selling a star turn of “If I Were a Rich Man.”

The deceptively simple production is a bit of a departure for Sher whose colossal versions of South Pacific and The King and I took full advantage of the enormous Vivian Beaumont stage at Lincoln Center. The action here starts in a nearly empty stage. The only scenery is a railroad sign with the name of Tevye’s tiny village Anatevka in Russian letters. Burstein enters dressed in contemporary clothes and reads the opening lines from a book—presumably by Sholom Aleichem whose stories inspired Joseph Stein’s book. He removes his overcoat to reveal Catherine Zuber’s detailed shtetl wear and becomes Tevye. This device establishes the connection between the world of the show and our own as Michael Yeargen’s floating, dream-like sets create a memoryscape.

As noted, Burstein as Tevye is the narrator, but also part of the ensemble, he never takes over the proceedings. Sher makes Anatveka into a believable community rather than a musical-comedy version of one. Each member is equally vivid from Jessica Hecht’s shrewish but strong Golde (Tevye’s wife) to Alix Korey’s meddling yet lonely Yente the matchmaker to Jesse Kovarsky’s flying fiddler who represents the dreams and aspirations of the town. Another new element is the choreography. In previous Broadway productions Jerome Robbins’ original steps were always incorporated, but London-based, Israeli-born Hofesh Shechter introduces a loose-limbed, free-form movement to the Anatevkans just as Sher and Burstein have transformed a traditionally show-biz-y work into a shatteringly real one.

Unfortunately, the new Once Upon a Mattress does not make the transition as smoothly. Like Fiddler, Mattress is traditionally seen as a star showcase. The original 1959 production helped launch Carol Burnett’s career and a 1996 revival ran aground due to a mismatched Sarah Jessica Parker in the lead. This fractured fairy-tale version of “The Princess and Pea” is basically an extended revue sketch with too much filler, but with the right cast it can be loads of silly fun. That’s why I had high hopes for the Off-Broadway Transport Group production. Jackie Hoffman has stolen almost every show she’s been in with her grouchy humor and with drag star John Epperson (better known as his creation Lypsinka) as the domineering Queen Aggravain, what could go wrong? 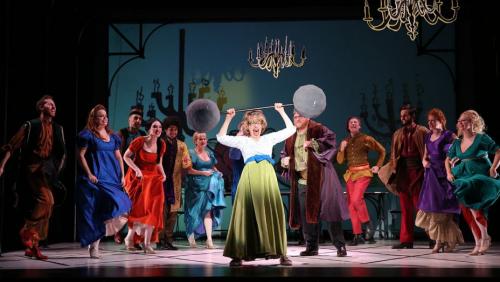 Plenty. The lead role of Princess Winnifred is a blustering good-time gal, the opposite of a stereotypical dainty flower, but she must also be warm and kind-hearted. Hoffman has the bluster, along with anger, wit and smarts, but she lacks the charm and kindness necessary to make us care about Winnifred’s quest to win the nerdy Prince Dauntless. She seems detached from the show, and her ad-libs give the further impression that she’s looking down on the proceedings. That leaves Epperson to fill in the gaps and he does with an outrageously camp performance referencing every drag-adored movie icon from Joan Crawford to Katherine Hepburn (he also gets help from Kathryn Rohe’s stunning costumes). But Aggravain, Dauntless’s mother, can’t be the center of the show, and director Jack Cummings III fails to redress the imbalance.

There are compensations in the form of David Greenspan’s whimsical king, Hunter Ryan Herdlicka’s charismatic minstrel, and Cory Linger’s light-footed jester, but they can’t smooth out the lumps in this Mattress.

Another Off-Broadway show successfully incorporates the musical style which usurped the Broadway sound in the popular consciousness around the same time Fiddler first opened. These Paper Bullets! at Atlantic Theatre Company morphs Shakespeare’s Much Ado About Nothing into a merry, mod romp featuring a Beatles-like group called the Quartos. Playwright Rolin Jones doesn’t strictly adhere to the Bard’s playbook, introducing clever variations on the war-of-the-sexes theme. The songs by Billie Joe Armstrong of Green Day offer catchy pastiches of the Fab Four’s hits and director Jackson Gay delivers a zany staging, abetted by Michael Yeargen’s  spiffy revolving set and Jessica Ford’s gear costumes. Justin Kirk is a bit long in the tooth for Benedict character, but still makes him a dashing rogue and Nicole Parker is a marvelous physical comedienne as Beatrice, here a high-end fashion designer. Bullets! is as goofy as Mattress, but fully commits to its own nuttiness and succeeds as a result. 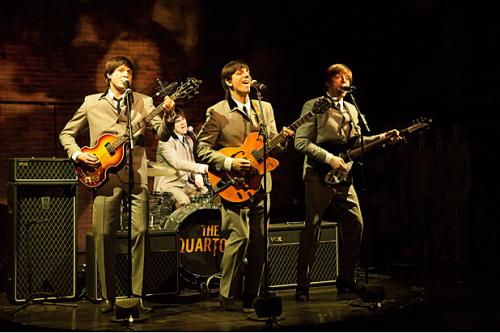 Originally Published on December 30, 2015 in ArtsinNY.com