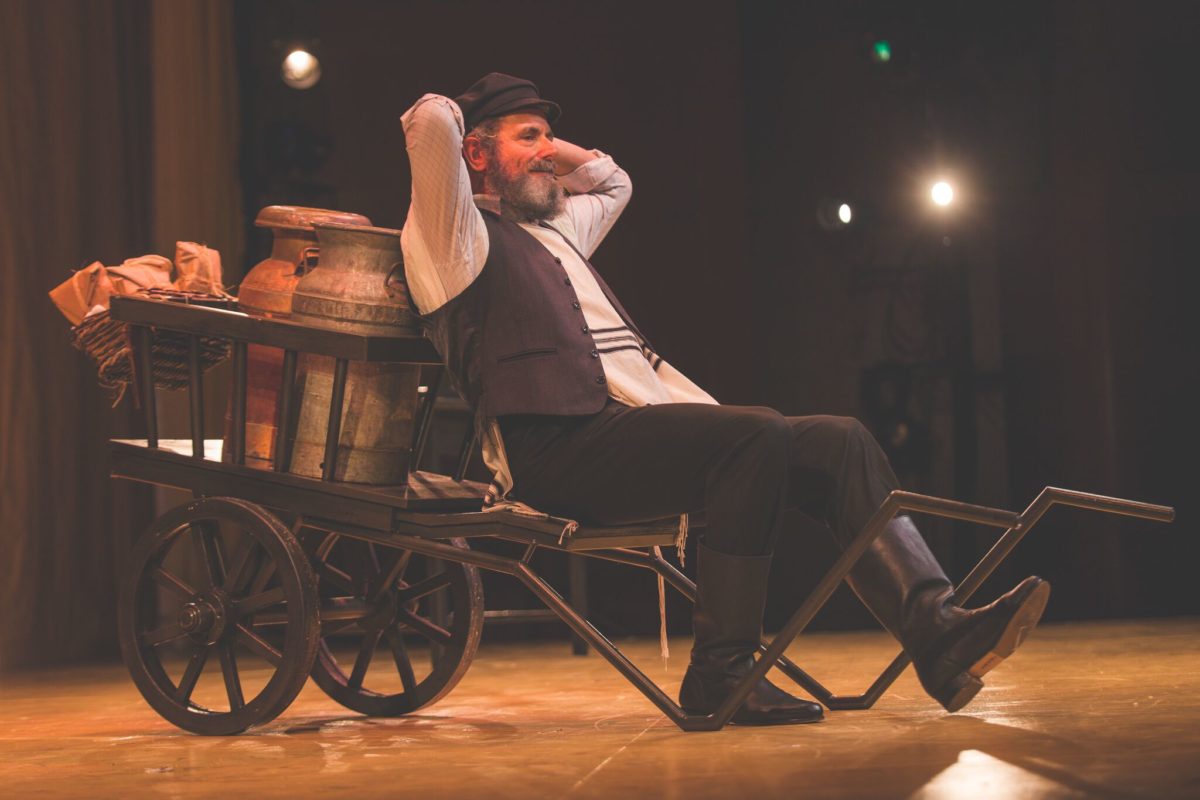 Along with   Friedman’s 1966 translation of Joseph Stein’s book, supertitles in English and Russian appear on a screen of homespun cloth. In Yiddish, we say, a schmatta. Indeed, the story, well known as it is, tells itself.

Here, we experience Russian village life, in the fictional village of Anatevka, during the pogroms at the turn of the 20th century. A time when village life was losing its stability, and people who had lived in these communities for generations were being driven from the land which enriched their lives, as they enriched it.

Still, the nature of change in modern times – it’s frequency and predictability – is completely different from what it was then. Tradition, Fiddler’s theme song, written in the ‘60s by Jerry Bock, with lyrics by Sheldon Harnick, reminds us where we came from and where our roots are. But it’s really speaking to the future, not only of the Jews, but of all people who need to know about their own traditions, and where they come from.

In this Yiddish language production, the customs of the past are revealed with immediacy, and urgency. Here, one cannot just say goodbye to a daughter who marries against your wishes. Those good byes are part of the diaspora, which is why separation has such an intense meaning here. Sadly, it still has that meaning for many immigrants in our own country.

As a musical, of course, Fiddler has its own theatrical history on Broadway with two fairly recent revivals. The 2004 production starring Alfred Molina, and the 2015 revival with Danny Burstein showed us a Tevya of a more contemporary sensibility.

The day I saw the show, Adam B. Shapiro played the role of Tevya, which is usually played by Steven Skybell. In fact, Shapiro portrayed the father so soulfully that one could feel life being torn asunder. A large man, with a big presence, he gives his all to this role.

A wonderful addition to the show, extracted from Chagall’s paintings, is Lauren Jeanne Thomas as the Fiddler, who becomes Tevya’s alter ego. She expresses in music, and in posture the emotions that leave him speechless. A beautiful violinist, she is graceful to watch.

Among the gifted cast of actors, singers, and dancers, Jackie Hoffman, (television’s Feud: Bette and Joan) is especially humorous as the matchmaker. Her deadpan humor, and the look of oppression on her face, speak a thousand words.

As choreographed by Joel Grey and Stas Kmiec, the Russian youth dance like ballerinas, not bullys.

Due to the popularity of the show, which opened in July, it’s being extended through October 25th, with rumors of a Broadway run.
Photography :Victor Nechay / Proper Pix