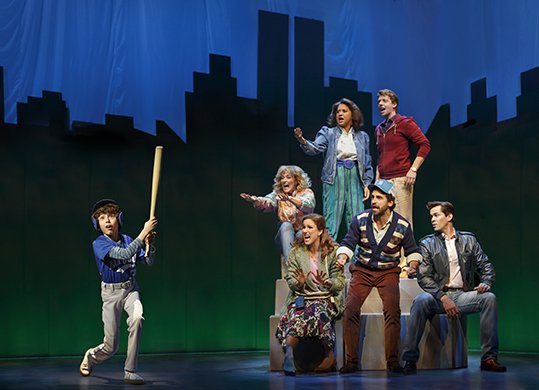 The Falsettos Sing-A-Long is the first of its kind done for a Broadway stage musical and will allow fans to belt out their favorite tunes along with the stars of the musical. Falsettos, which received five 2017 Tony nominations for its Lincoln Center Theater production, is a hilarious and poignant look at a modern family revolving around the life of gay man Marvin, his wife, his lover, his soon-to-be-bar-mitzvahed son, their psychiatrist, and the lesbians next door. Originally created on the cusp of the AIDS crisis, this timely musical about middle-class family dynamics manages to remain buoyant and satirically perceptive, even as it moves toward its heartbreaking conclusion.

Lincoln Center Theater’s production of Falsettos, presented in association with Jujamcyn Theaters, stars Christian Borle, Stephanie J. Block, Andrew Rannells, and Brandon Uranowitz, all of whom received Tony Award nominations for their respective performances. Anthony Rosenthal, Tracie Thoms, and Betsy Wolfe round out the talented cast. The production was filmed live at the Walter Kerr Theatre in New York City in January 2017. You can watch the Falsettos Sing-A-Long HERE, which will be up on the BroadwayHD site for 48 hours.

While the film is free for everyone to enjoy, viewers are encouraged to make a donation to Broadway Cares/Equity Fights AIDS and its Emergency Grants for Pandemic Relief at https://broadwaycares.org/falsettos2020.

Be sure to follow along with BroadwayHD’s Twitter and Instagram throughout the event. Gather the whole family and use #FalsettosSingALong on social media to be a part of the fun!

The celebration on BroadwayHD will continue with a vibrant playlist of trailblazing musicals, plays and other productions centered around the LGBTQ community. Some of the exciting titles viewers can stream this month include Cyndi Lauper and Harvey Fierstein’s Kinky Boots at London’s Adelphi Theatre, Del Shores’s production of Southern Baptist Sissies, Indecent, Brokeback Mountain the opera composed by master operettist Charles Wuorinen, Hello Again, Bright Colors and Bold Patterns directed by Michael Urie and more.

“BroadwayHD has such a diverse fanbase and we are proud to celebrate Pride Month with an incredible viewing event that showcases a wide variety of exciting productions from talented creators and performers,” said BroadwayHD co-founders, Tony Award®-winning producers and filmmakers Stewart F. Lane and Bonnie Comley.

Kinky Boots- The digital capture of Kinky Boots was filmed at London’s Adelphi Theatre. The musical focuses around Charlie, who is a factory owner struggling to save his family business. Lola is a fabulous entertainer with a wildly exciting idea. With a little compassion and a lot of understanding, this unexpected pair learns to embrace their differences and create a line of sturdy stilettos unlike any the world has ever seen.

Indecent- Indecent is inspired by the true events surrounding the controversial 1923 Broadway debut of Sholem Asch’s God of Vengeance—a play seen by some as a seminal work of Jewish culture, and by others as an act of traitorous libel. The play charts the history of an incendiary drama and the path of the artists who risked their careers and lives to perform it. Contains adult themes.

Brokeback Mountain Opera- Brokeback Mountain is the heart-wrenching tale of ranch hand Ennis del Mar and rodeo cowboy Jack Twist, two young men who meet and fall in love on the fictional Brokeback Mountain in Wyoming in 1963. Composed by master operettist Charles Wuorinen, this marks one of the ambitious and major works in his long and storied career.

Six Characters in Search of A Play- Del Shores’ new one-man play, “Six Characters In Search Of A Play”, brings to life six one-of-a-kind characters he has met in real life that haven’t quite made it into one of his plays, films or TV shows. Shores shares the truth behind how he collected these eccentrics and their stories as he portrays his hilarious, off-the-rails encounters with them.

Bright Colors and Bold Patterns- The play directed by Michael Urie, follows the story of Josh and Brennan, who are about to get married in Palm Springs on a lovely Saturday afternoon. However, the night before becomes a drunken, drug-fueled riot, because their friend Gerry has arrived, furious that their invitation says “Please refrain from wearing bright colors or bold patterns.” In the struggle for equality, what do we really want? What do we lose? And is there any cocaine left?

Ruthless- The camp cult classic from Joel Paley, with music by Marvin Laird, is filmed from London’s West End critically acclaimed off-Broadway production. Ruthless! The Musical famously spoofs Broadway musicals from Gypsy to Mame, as well as iconic films including The Bad Seed and All About Eve. The production follows a talented eight year old, Tina Denmark, who will do anything to play the lead in her school musical.

BroadwayHD introduces award-winning theater from all across the globe with both classic and modern productions.  Fans can expect to see the full works of Shakespeare, awe-inspiring performances from Cirque du Soleil and a selection of the world’s greatest musical including Kinky Boots, Cats, 42nd Street, She Loves Me, The Phantom of The Opera, The King and I, Sound of Music, and An American in Paris. All performances are adapted specifically for streaming audiences to maximize the entertainment experience.  To learn more about BroadwayHD, visit www.broadwayhd.com.