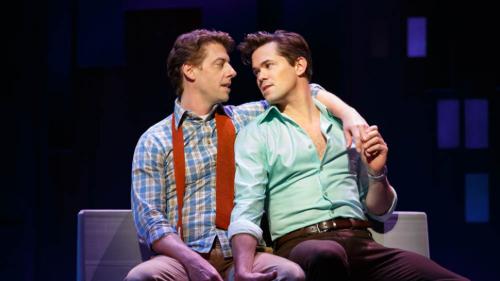 Two current operas (or one opera and a sort of opera) provide New York audiences with  contrasting musical experiences experiences. Technically Falsettos isn’t really an opera, even though it is sung-through with only a line or two of spoken dialogue. But it does evoke high emotions for the modern age despite it’s being close to 25 years old. The Metropolitan Opera’s production of Rossini’s Guillaume Tell, almost
three centuries old, offers more traditional musical thrills and at over four
hours it’s quite the challenge for the non-buff, but its rousing third act is well worth the wait.

The new production of Falsettos for Lincoln Center Theatre isn’t that much different from the original 1992 Broadway production. Both are directed by James Lapine who collaborated on the non-spoken book with composer-lyricist William Finn. The show is actually a pairing of two one-acts—March of the Falsettos and Falsettoland—both presented Off-Broadway in 1981 and 1990, respectively. They follow the chaotic domestic relations of Marvin, a gay man who bursts out of the closet, leaves his wife Trina and son Jason to move in with the younger party boy Whizzer. Trina later marries Marvin’s psychiatrist Mendel and the makeshift extended family, which also includes Marvin’s lesbian friends Dr. Charlotte and Cordelia, faces a crushing blow when Whizzer contracts AIDS. Set decades before gay marriage, this chamber musical chronicles the painful journey of Marvin from frivolous boyhood to a messy maturity. All the male characters deal with maturity issues, hence the falsettos reference in the title(s).

Once again Lapine moves the nearly three-hour show at a quick pace, skillfully balancing its lighter and darker elements and Finn’s rich, complex score comes across brilliantly. The new cast, bouncing around David Rockwell’s building-block set, gives as deep performances as the originals. At first, Christian Borle is stingingly entitled as the self-centered, neurotic mess Marvin. But as his character grows in compassion, the limning becomes more shaded. Likewise, Andrew Rannells’ Whizzer branches from a shallow boy to a tragic figure. I didn’t think anyone could top Barbara Walsh’s marvelously manic Trina from the original, but Stephanie J. Block equals her dizzying confusion and desperate neediness, particularly in the hilarious “I’m Breaking Down,” Trina’s comic lament at losing her husband to another man. Brandon Uranowitz makes Mendel lovably nebbishy. Anthony Rosenthal delivers an impressive Broadway debut as the precocious adolescent Jason and Tracie Thoms and Besty Wolfe are an adorable couple as the lesbians next door.


This new  Falsettos doesn’t provide any stunning new insights into material, but it does offer a heartfelt portrait of an unconventional family struggling to find a way to live and a glimpse of a time when such unions were beyond the pale of mainstream America (And, with our new radically conservative president, may be again).

Another Lincoln Center production also focuses on a family in crisis. Guillaume Tell, Rossini’s last opera, receives its first Metropolitan production in over 80 years. It probably best known  for its overture which was employed as the theme for the Lone Ranger radio and TV series. In recent weeks, the production made off stage headlines
when an audience member sprinkled the ashes of his late opera-loving mentor in
the orchestra pit during intermission, causing a police investigation and the
cancellation of the performance. The powerful work deserves notoriety on its
own rather than for these associations. Pierre Audi’s bizarre production places
the 14th century story of the archer forced to shot an apple off his son’s head
in an abstract dreamscape (George Tsypin’s minimalist, weird sets feature
upside-down cows and boulders.) In addition to the set, there are some kooky,
distracting staging concepts. One of the strangest is having the decadent court
of the tyrant Gessler got up by costume designer Andrea Schmidt-Futterer in
black leather and top hats and forcing the downtrodden townspeople to do the can-can.

But all this eccentricity is forgotten in the climactic third act which culminates in that famous feat of archery. Gerald Finley is a manly, heroic Tell matched by the rumbling bass of John Relyea. John Osborn and Marina Rebeka deliver gorgeous duets and solos as the prerequisite star-crossed lovers. Opera or almost-opera., Lincoln Center
delivers prime examples of both. 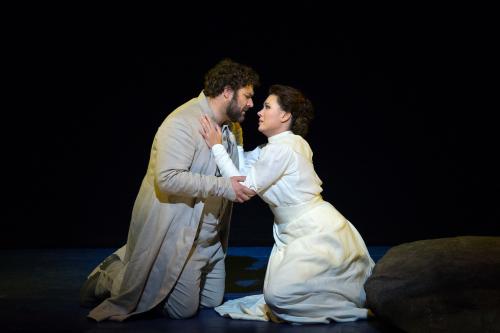